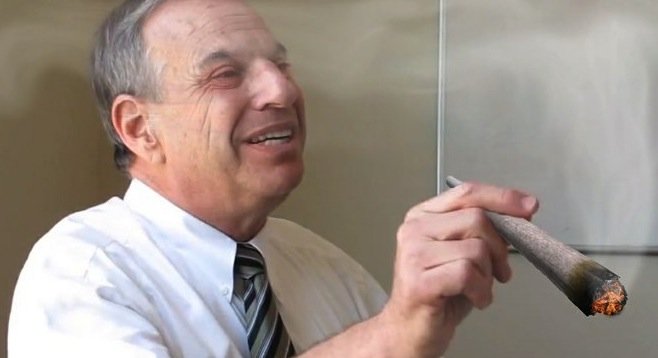 Mayor responds to chargers that he lacks motivation.

"What a drag," said Sunshine Sparklepony, owner of the Rolled Gold medical marijuana dispensary next to the First Impressions Daycare Center on North Park's Ray Street. "Filner had everybody feeling groovy when he told that square [City Attorney Jan] Goldsmith to stop bringing us down and let us do business with people who just need a little help, you know? But now he's all, 'I will be working very hard in the next 30 days to bring an ordinance to the City Council that ensures that the zoning law allows for reasonable regulation of medical marijuana dispensaries in the City of San Diego.' What the hell? It's like something just took away his itch for justice."

Reached for comment, the Mayor exhaled and said, "Sparklepony needs to relax. That kind of constant niggling gets me feeling all anxious, which is the whole reason I got this...um...treatment prescribed in the first place."