New zones would include some commercial and light industrial areas.

Medical Marijuana patients in San Diego may not have to travel to remote industrial areas to get their medication, that is, if city councilmembers agree with a proposal to open new zones for dispensaries.

A committee comprised of former task force members and mayoral staffers drafted a new map that would allow dispensary owners to open shop in all Commercial-Community zones (CC) some Commercial-Regional zones (CR), and in both light (IL) and small industrial zones (IS).

Talk of opening new zones for medical marijuana dispensaries comes one month after Mayor Bob Filner first instructed the City Attorney's Office and Neighborhood Code Compliance to ease up on enforcement of code violations against dispensary owners and patients. Filner later backtracked, announcing that he would present council a new, more accessible ordinance.

Filner's office did just as instructed.

In their map, retail and commercial areas not included in a previous 2011 ordinance would now be fair game for dispensaries and collectives.

Some of those areas, according to the land development code, even include some "pedestrian-friendly commercial streets to shopping centers and auto-oriented strip commercial streets," as well as a few residential developments located near major streets and busy transportation lines.

If council approves the map as is, the bulk of new dispensaries would be allowed along major roads and highways as well as in areas such as retail areas such as Hillcrest, Normal Heights and City Heights. The most concentrated area appears to be located in the light industrial and commercial zones just north and west of Old Town.

The city council is expected to discuss a new ordinance at a March 5 meeting. 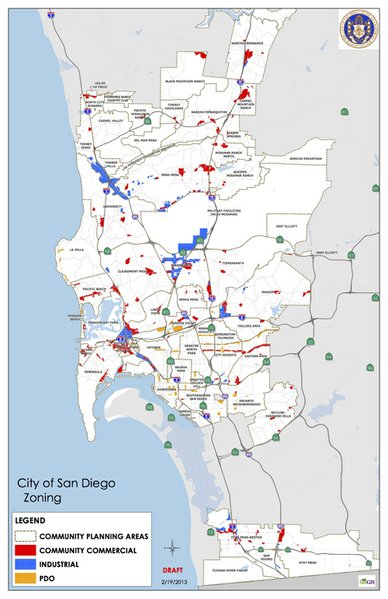 Cool! Quite a concentrated placement. We could have the beginnings of an MMD. Dispensaries would have to charge buyers a 2% fee and then use the money to advertise in Arizona, Florida, etc. Think of the tourist dollars.