Romney: "No, seriously - what are we doing in Afghanistan?"

"If I'm elected President, will someone explain it to me? Is that how it works?" 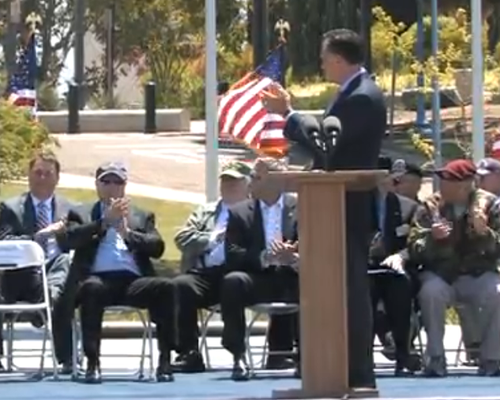 NOBODY EXPECTS THE MORMON INQUISITION, BALBOA PARK - Republican Presidential front-runner Mitt Romney shocked the 5,000 or so people who gathered yesterday to hear his Memorial Day address in front of the Veteran's Museum. Mid-way through his speech, he seemed to lose his train of thought; then, after a confused pause, he turned to fellow Republican and United States Senator John McCain and asked, "No seriously — what are we doing in Afghanistan?"

"Every time I try to push the issue with my campaign advisers, they remind me of this or that member of the War Department saying, 'We must keep going in Afghanistan so that those who have died there already will not have died in vain.' But if the whole war is basically pointless — I mean, everybody knows Al-Qaeda is holed up in Pakistan now, and that the Taliban isn't going anywhere, right? — then everybody who dies there dies in vain, right? How is it honoring the dead to pile more bodies on top of them? I'm not a veteran, but when I was working at Bain Capital, we called this sort of thing 'throwing good money after bad.'"

Romney paused, as if realizing the likely effects of his words on people who had gathered to honor America's fallen soldiers. But then he pressed on. "I know there are those of you who will bristle at my comparing conducting a war to running a business," he admitted. "But I didn't start this. I mean, just look at President Obama's language surrounding the troop withdrawal: 'Winding down the war in Afghanistan.' You don't 'wind down' a war. You wind down a business operation. You win a war or you lose a war. Am I right, John?" he asked, turning back to Senator McCain.

When McCain offered nothing but a murderous glare in reply, Romney turned again to the crowd. "Now President Obama has the Secretary of Defense telling everyone that 'we're not going anywhere,' that we'll have a presence in Afghanistan clear through 2024. Because why? Because by then, Afghanistan will love America and democracy and Enlightenment notions of human society? I just don't get it."

Great website! I am loving it!! Will be back later to read some more. I am bookmarking your feeds also. link text

Seriously this is the best we can provide as a candidate as we can get? lol Really and interesting article too bad more people didn't hear about this, definitely a TMZ moment. Our troops need as much support as we can give.