I didn't name this place; my family did. Most of the residents here are hoofed and living out their days in peace. A few, including me, are here to heal. This camp consists of 36 acres deep in the heart of Texas about 15 miles outside of a town called Nacogdoches.

There is funny little horse called Pedro that keeps getting my attention. I've told him everything. He wanders around and follows me whenever he can. Last night, he patted me down for carrots and we saw a shooting star together.

The sporks (spoon/forks) are cross breeds between miniature horses and donkeys I think. There are a pair of them and they are the first hoofed animals that I have ever seen wrestle. They love to bray-night and day. They are considered lawn ornaments that eat.

One is an older horse who I've been told was once a champion that won dozens of buckles in his day as a barrel racer. Another is half-blind and I am careful to come up on her sighted side when I feed so I don't startle her. She is a very gentle animal and loves to have her neck stroked.

I am just beginning to explore and uncover the secrets of the area. There is an old hotel called The Fredonia which is rumored to be haunted and is within walking distance of the historic downtown square. I went there today for lunch and had Parmesan catfish, baked beans and mashed potatoes with bacon. Finished off with key lime pie, the meal was good and under $11.

Another place I plan to check out is called Kimberly's Kloset. I asked a lady I met where she got her beautiful full-length sun dress and she directed me there. It is one of those upscale resale shops for women like they feature on that show "Resale Royalty." There is a TV in my mother's home and I haven't watched television in years so it's all new to me.

There are also loads of antique stores in the downtown area that I want to look through as I always love to find early American glass made by the Heisey factory which my family has a connection to. Sometimes in these small towns there are rare pieces of the glass which I've collected for years. They have a diamond H logo and it's a thrill to find a piece as the company shut down in the 50s and pieces are getting rarer by the day.

Stay tuned. I'm just getting started here in the oldest town in Texas, For now, SherryD 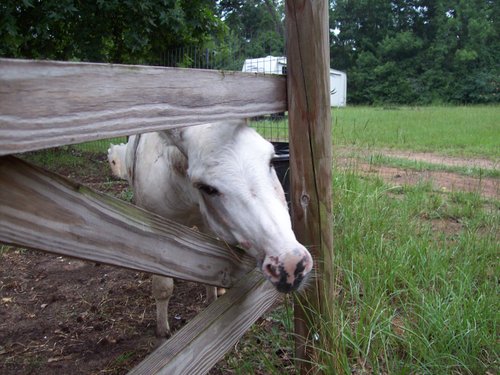 If I could figure out how to open this gate, I dang sure would! 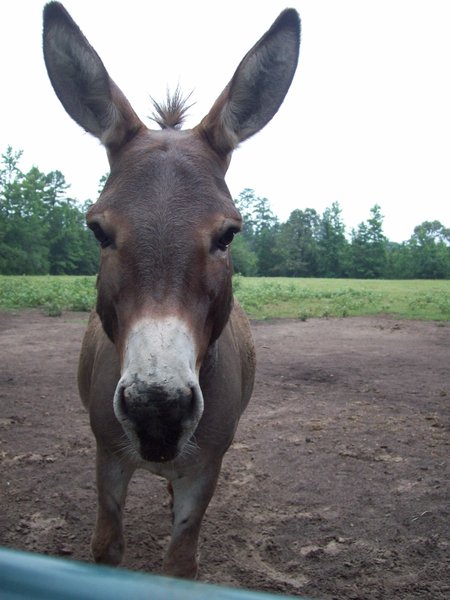 I'm a Spork if you've never seen one.

Nice animal photo, seems you have already found the best the small town has to offer. Misfit island seems peaceful, I have been to fantasy island many times, though its alot different & this is not about me.