“We’re the only crab cake food truck in San Diego, or LA,” says Vonniejune Kendall. “And we only use blue crab from back east.” 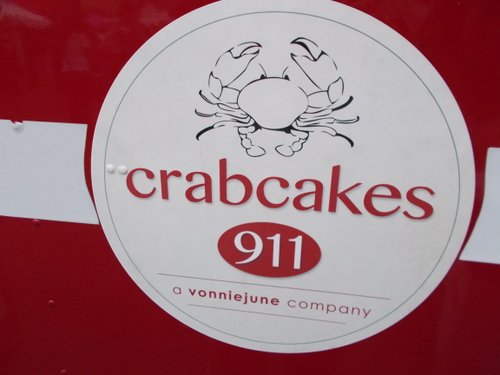 Had never heard of a crab cake truck before. But I noticed this mom, Dally, and her baby, Zuriel... 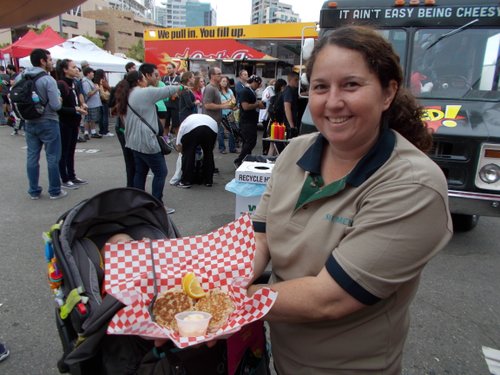 ...munching on a couple of crab cakes. The menu said they were Maryland-style, and “99 percent blue crab, wild caught, jumbo and back fin –no bread.”

Maybe that’s why they were $13. Not the cheapest.

I go for the sliders.

Vonniejune cooks them, then hands them out to me. She’s a lively gal with a big wide smile you see like behind a veil because of the gauze at the delivery hatch. 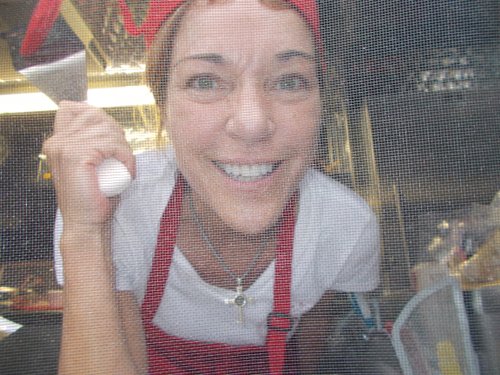 I have to ask her about the truck, because the sign on the side says it was actually at 9-11, Ground Zero, on the day, back in 2001. The only one there on the site to feed the first responders.

“Oh this truck!” says Vonniejune. “It has a life of its own. This is a special food truck. It’s an honor to have it.”

At the time, she says, it was called the Providence Canteen. She points to the panel describing this truck and that day. “…They drove inside the disaster zone, where papers littered the ground and dust swirled in the air like snow. They parked on Murray Street, about 500 feet from the fallen towers…The responders, caked in dirt and dust, through the night and day [were] handed out: beef stew, chili, hot dogs, coffee and hot chocolate at night, and water, eggs and ham in the morning…The truck will continue to serve the community, and First Responders. My company will donate a percentage of net profits, and all profits made every September 11th. We will always have something to give.” 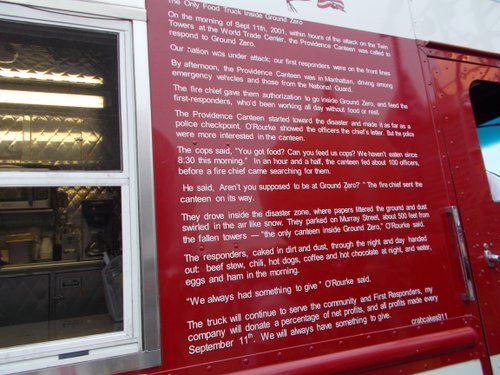 So now I find a table and sit down to chow in. The crab cakes are small but filling. And nice to know they’re "99 percent actual crab." Using bready fillers would be so easy. 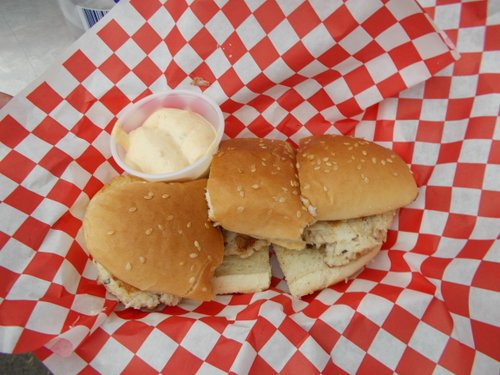 But the best thing is the sauce. Cajun remoulade, Vonniejune calls it. “It has mayo, cayenne, mustard, garlic…and the rest I’d have to kill you if I told you,” she says. 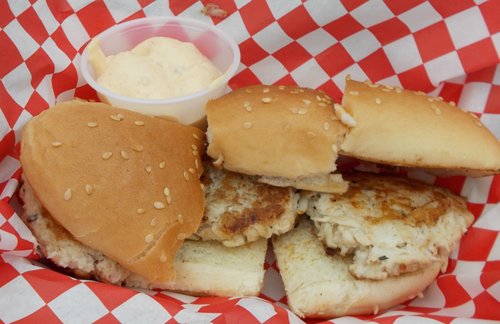 Whatever, I can definitely taste the cayenne and the mustard and it gives a sharp kick to the crabby mix.

Problem is gonna be finding these guys. They only started in January, and their website’s not quite up. Thank goodness for Twitter and Facebook. Oh, and their phone's 619-997-2850.

Great article about my sister's truck and business. Yes, one of the great things about Crabcakes 911 is the crab cakes have no fillers(gluten free too!). You also talked about the cost. I looked up some local delis and restaurants in Baltimore and the average price of ONE crab cake is $13. Perhaps I should consider moving back to San Diego!

I found this food truck by accident when I arrived too late for my favorite paleo food truck. They have the BEST maryland crab soup I ever tasted. I know this because I lived most of my life back east. The vegetables were so fresh they were still a little crisp - and lots of crab. I can't wait until their website is up...