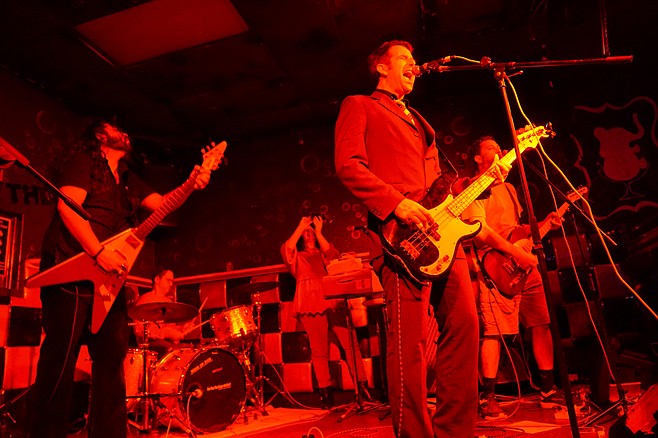 Pete Bayard had performed in a series of bands in St. Paul, Boston, and New York City before he landed in San Diego and started playing in the local outfit Inigo in the mid-2000s. He followed that with a short stint with locals Rookie Card before he moved to Seattle near the end of the aughts. There he found himself playing in yet another band. When he returned to San Diego in the early 2010s he started a new outfit called Super Buffet. The band had a peculiar genesis.

“It started mainly on a whim,” Bayard explained. “I was going back home to Boston for something. My brother still lived there, and he’s an excellent drummer. I called him up and said, ‘We’re in a band, and I just booked a show for us. I’ll send you some material later.’ I still knew a lot of bands in the area, so I put together a show and it was sold-out. Standing-room only.”

One-off shows in his old stomping grounds of Minneapolis and Seattle followed, and Bayard eventually decided to get the project going in San Diego. At that point, he had one child, his wife was expecting twins, and many of his musician friends were becoming parents as well. As a result, Bayard would aim “to keep it loose and get away with as much as possible” with the San Diego incarnation. A key element of this was allowing musicians to come and go as their schedules allowed.

Bayard’s old Indigo bandmate, Chris Silva, jumped in early and has been a solid presence providing rhythm guitar and backing vocals. Drummer Brendan Ruff has been quite reliable as well. Bayard claims these two have been around “99 percent of the time” even though five other drummers have sat in for gigs. Bayard tackles bass and lead vocal duties himself, so that leaves the occasional keyboard and vocal accompaniment courtesy of Marie Haddad and a myriad of lead guitarists that have done stints with the band including Wendy Bailey, Paul Ryu, Dennis Sheridan, and their current axe-wielder, Jon Norwood.

Despite a bit of musical chairs, it usually works out fine for the gigs. That being said, Bayard did have one “crossed-wires” incident with his bandmates that landed him an unexpected solo slot at the International Pop Overthrow event in Silverlake.

“Brendan was available, but I said ‘Don’t even worry about it, it’s not worth the drive.’ That was probably a huge mistake. It was a challenge, it was fun and I can now tell myself and nobody else that I did it, but I don’t plan on launching a singer-songwriter-with-the-bass career. People would cheer because I think they were just confused. It was minimalist. Maybe Phillip Glass would have approved,” Bayard laughed.

The current line-up of Super Buffet (Bayard/Silva/Ruff/Norward/Haddad) are beginning studio sessions for what Bayard hopes will become a full-length album. Even though the band has a bit of a revolving door of players, Bayard made sure to point out that they all bring their individual flavors to the project.

“My sketch demos are skeletal,” Bayard explained. “I try not to tell anyone what to play unless there’s a hook or lead that is essential to the song. So, what you hear is a true collaborative work.”