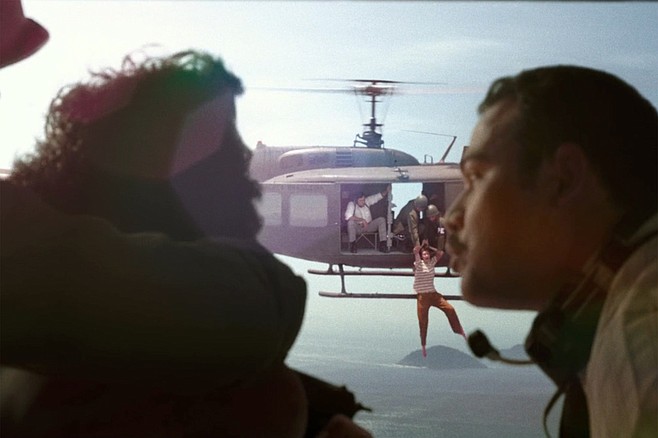 What’s it going to take to get Tommaso Bruscetta to testify?

Family. It’s why Charlie lent a helping hand to his hair-triggered cousin Johnny Boy in Mean Streets. But go against Mr. French in The Departed and he’ll soon forget how once upon a time your grandmother was nice to him. Taking sides against the family is what cost Fredo Corleone his life. Show me a classic cosa nostra saga that doesn’t affirm the importance of family and... well, I’ll show you Marco Bellocchio’s The Traitor, everything one hoped The Irishman would be but wasn’t.

For a change, we’re not greeted by a title card announcing the factual basis behind the story. It wasn’t until an hour or so into the picture that newsreel footage of Tommaso Buscetta’s 1984 extradition from Brazil to Italy cleared up any doubt. Buscetta (played with rumpled aplomb by Pierfrancesco Favino) concurred with Don Corleone’s attestation that, “A man who doesn’t spend time with his family can never be a real man.” But unlike Coppola’s faithful forever Mafia Don, Buscetta — known to the inner-circle as the “Boss of Two Worlds” — is on his third wife (Maria Fernanda Cândido). (Given his rank, Buscetta is not allowed to participate in the vote to divvy up the heroin trade that opens the picture.) Working the villa in his best John Travolta disco-white dress, Buscetta is complimented on his latest bride, particularly her ability to raise four children from his previous marriages without demanding any of her own. So much for sentimental ooze.

Buscetta had no use for the term “mafia;” to his way of thinking, it was a non-existent appellation cooked up by a media eager to sell tabloids. He answered to the Cosa Nostra, a simple soldier. not looking to command, just out to have a little fun while picking up stacks of walking around money. What had its origins in cigarette smuggling soon brought world recognition to the Sicilian mobster — the first to turn pentito (informant), explaining to the courts the inner workings of the Italian underworld.

The violence, administered with cold-blooded, matter-of-fact precision, commences on a note of barbarous score-settling: a mourner, moving in to kiss the grieving widow, takes leave with half her ear bitten off. In no time, bullets ring out. With bodies mounting, a clock in the lower left corner of the screen begins playfully counting up the fatalities. A father abandons his car and young son, leaving the boy with one brief bit of parting advice: “Stay down.” Why simply trigger a capo when one could just as easily (and sadistically) hack off a shooting arm before putting the bullet through him? A priest rounding the corner of the vestry sprays the opposition with machine gun fire. The killing spree ends with a brief, stunningly-staged shootout in a mirror factory, bringing the number of casualties to 156.

What’s it going to take to get Bruscetta to testify? How about this: his head forcibly jerked in the direction of a nearby hovering helicopter, the battered goomba spots his wife literally hanging by her hair. Add to that the disappearance of his two oldest sons, and the heretofore reluctant witness is ready to talk. It’s at Buscetta’s request that he’s placed in contact with anti-Mafia judge Giovanni Falcone (Fausto Russo Alesi), with whom he’ll spend 45 days being interviewed. The two struck up a friendship; no sooner were Falcone’s cigarettes certified strychnine-free than Buscetta agreed to turn rat.

The film’s centerpiece is Buscetta’s testimony in the second Mafia trial against mob chieftain Salvatore Riina (Nicola Calì). If we are to be stuck in a courtroom for any prolonged period of screen time, may the minutes pass in visual resplendence. The “all talk and no show” appearance that casts a pall over many courtroom dramas is nowhere to be found, due in large part to the stage set by production designers Andrea Castorina Jutta Freyer and Bellochio’s staging within it. It may seem a stretch, but imagine Maximilian Schell’s Man in the Glass Booth transposed over DeMille’s gladiatorial climax to Sign of the Cross, with bonus background action reminiscent of Walter Hill’s caged prize fights in Hard Times. The counter that once tallied victims now lists victimizers, the number representing the years they’ll be spending in prison.

An air of stylization over glamorization lingers throughout the picture, but at 145 minutes, the last third dragged on a bit. (The courtroom drama proved a tough second act to follow.) What’s left of the Buscetta’s family is extradited to America and placed in the Witness Protection Program. Bellocchio (Fists in Pocket, Vincere) shows us a society not content with simply wiping out the opposition. They want your seed, your children. Only then can they sleep at night.