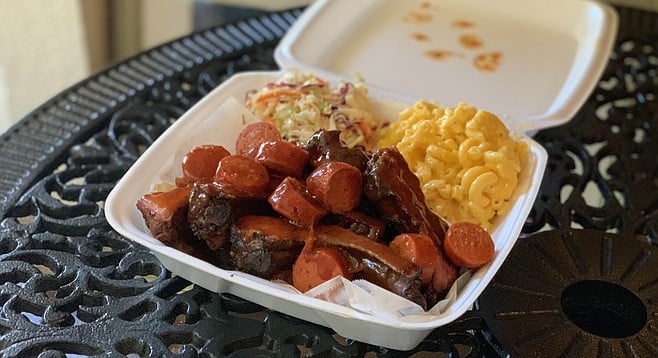 Bowlegged BBQ is your next Texas temptation

There’s music and art all around me as I dig in to a pile of BBQ meats. Old soul and R&B album covers hang, framed on the walls, packed in alongside stylized paintings depicting scenes and icons of African-American heritage, including portraits of Ray Charles, Dizzy Gillespie, and other musical greats. My favorite Earth, Wind, and Fire track comes next on the mix of tunes forever jamming on a set of speakers set up in the corner of the homey dining room, just in time for my first bite of rib. As moments go, it’s one I’ll remember like the 21st night of September. It’s darn near perfect.

Not that it looks that way from the outside. Bowlegged BBQ resides in a squat and shabbily stuccoed, 70-year-old building in Mount Hope that previously housed a 99 Cent store. The only thing about the storefront that beckons is the large barrel smoker placed out on its front corner. Fortunately, that was enough to get me inside, where I could soak in the cheery vibe. 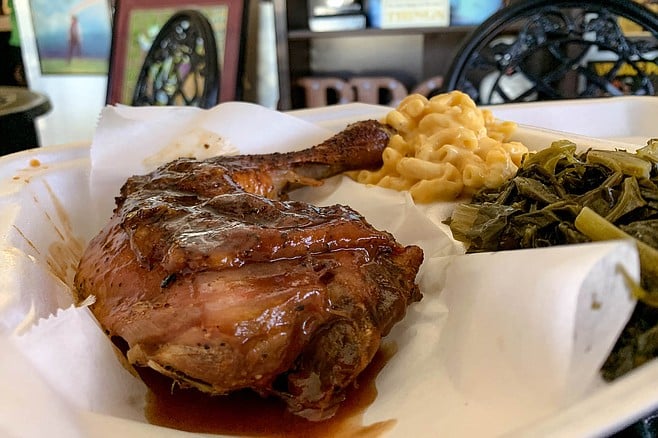 A quarter chicken with collard greens and macaroni

And dig in to those ribs. Except I couldn’t decide on just ribs, so I ordered a sampler platter so I could try the hot links and brisket. The trio plus two sides amount to the best 24 bucks I’ve spent all week. And don’t get me started about the mac and cheese. Because when I come right back a couple days later, I pretend as if I’m there to try the quarter chicken (leg and thigh with two sides for $10), but I’m really there to get more of that cheesy mac, alongside anything smothered in the house-made BBQ sauce.

Texas BBQ has become potent cultural phenomenon: the term itself is almost clickbaity these days. It inspires fanatical devotion among finger-licking fiends outside of Texas, and long lines about anywhere it’s done right. The long lines haven’t found Bowlegged yet, at least not when I sneak in on a succession of weekday afternoons. But then it’s only been open ten months. Already there’s a steady stream of regulars flowing in and out for their meat, smoked slow and low. They might take it out to the back patio to enjoy in the light of day, or stay inside one of the colorful dining rooms to chat with the family running the place, four siblings who bring their Texas roots and family recipes to life in this old building on Market Street. 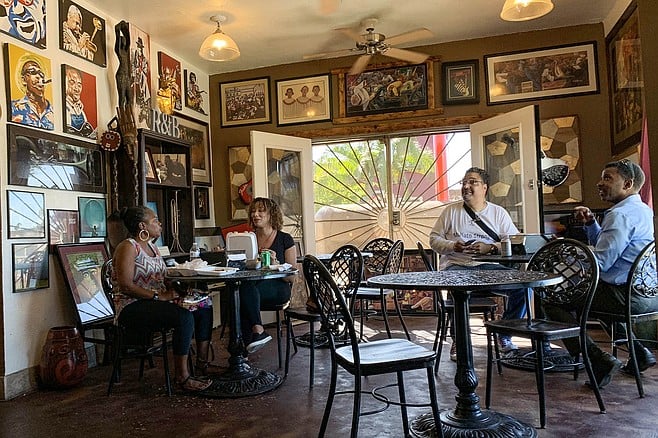 Patrons engage with the owners in one of the art- and music-infused dining rooms at Bowlegged BBQ.

“You forgot my cornbread!” says a regular when the woman running the counter reminds me not to forget mine. That’s an oversight that won’t be repeated. The cornbread has the texture of cake, and it’s rich enough not to need frosting. I don’t even think to ask for butter, which is normally my favorite part of cornbread. Like everything here — collard greens, dirty rice, black eyed peas — most of my thoughts while eating it boil down to, I need to eat more of this.

People will want to know where Bowlegged rates in the pantheon of San Diego’s best BBQ joints, and I could easily bluff up some kind of numeric answer. But I like to think we’ve moved beyond rankings that all the Phil’s BBQ fanboys will shout down. What we’re dealing with here is a BBQ restaurant that’s more than the sum of its parts.