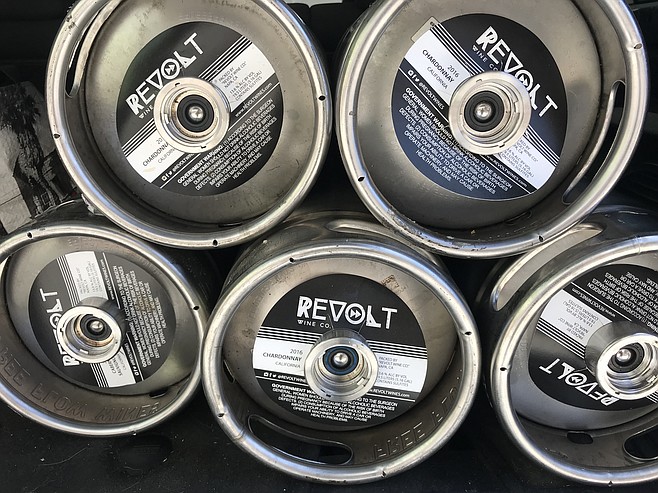 No adult beverage is more closely tied to a sense of geography than wine. Names of wine growing regions are used as shorthand for quality, attributed to an appellation’s terroir. In other words, the flavor imparted by its dirt. It’s why the traditional, estate winery business model calls upon wine enthusiasts to visit the location the grapes are grown and fermented, to taste a wine in the place where it purportedly makes the most sense.

So what’s to be made of Revolt Wine Co., a new breed of wine label that sources grapes from all over California, makes wine in Napa, and sells wine exclusively in San Diego?

There’s actually a roundabout logic to Revolt’s unmoored sense of place, and it’s a story that includes Nebraska. That’s where the Revolt founder Heather Hudson grew up, and experienced her first taste of the wine industry. Her interest subsequently drew her to France, and then the neighboring Northern California wine countries of Napa and Sonoma, where she worked for a small winery and pursued a degree in wine business, all the while plotting her own take on a wine startup after work each night. Seven years ago, that label started out producing 25 cases per year by the name WTF, with no tasting room and bottle-club-only sales to customers in 15 states.

Business grew steadily, but in the intervening years, San Diego’s sense of place made a mark on Hudson and her husband. They took a vacation here a few years back and liked it so much they decided to relocate. While she brought northern California vineyard and winemaker connections with her, she saw a different kind of opportunity selling wine somewhere better known for beer. “As I got to thinking about it,” Hudson says, “it was the best move for my brand… I could take something I started and bring it somewhere that wasn’t oversaturated with wine.”

She runs the business out of Pacific Beach, self-distributing Revolt’s two annual vintages, a cabernet and stainless steel fermented chardonnay, producing the equivalent of a thousand cases annually. Ironically, it’s a different interpretation of a wine’s sense of place that inspired her to rebrand and make what would be considered a controversial move the traditional wine community: to ditch bottles altogether and only sell wine by the keg. The idea is that, where a wine came from may be less important to some wine drinkers than where they are and what they’re doing when they drink it.

“In Napa, the focus is what’s in the glass,” she explains, “I wanted to focus on the experience they shared with the wine.” So she’s paired her passion for wine with her passion for music, and markets her brand by producing web content with musicians including unsigned regional bands and national headliners such as The Offspring, Iration and, Warren G. Putting the wine in kegs makes it marketable to bars, clubs, and breweries operating live music venues.

In doing so, she’s skipping past the swirl, sniff, and sip crowd of wine drinkers. “That’s not the kind of person I’m going after,” Hudson says. When Revolt’s target audience remembers drinking its wines, she figures, “It’s not just what’s in the glass. It’s like, I was really rocking out at this concert!”

It means Revolt is bypassing the usual suspect wine shops and restaurants, instead focusing on places such as Amplified Ale Works and 710 Beach Club in Pacific Beach, and the Navajo Live music venue in La Mesa. “I would rather be one of two or three wines served in a place like that,” Hudson concludes, “than be one wine out of a hundred on a big restaurant wine list.”