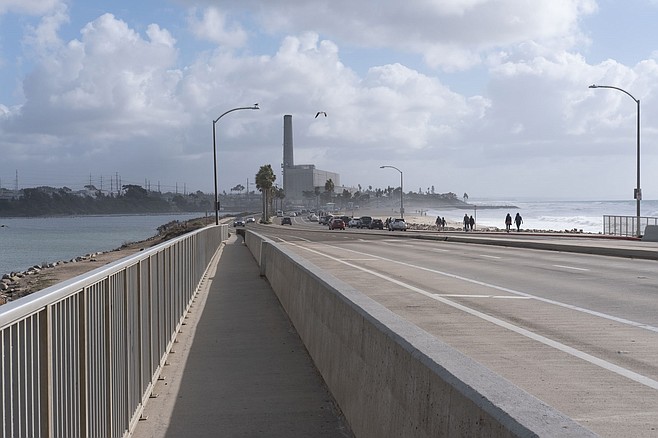 This trail has both bike and hike options with ocean vistas.

The Coastal Rail Trails, when complete, will offer an opportunity to walk, hike, or bike (out of vehicular traffic) the 44 miles from Oceanside to the Santa Fe Depot in downtown San Diego. So far, several legs of the trail have been completed in North San Diego County. Though they do not form one continuous path, these segments — plus those existing on road bike lanes — offer outstanding ocean views, as well as a venue for invigorating exercise. 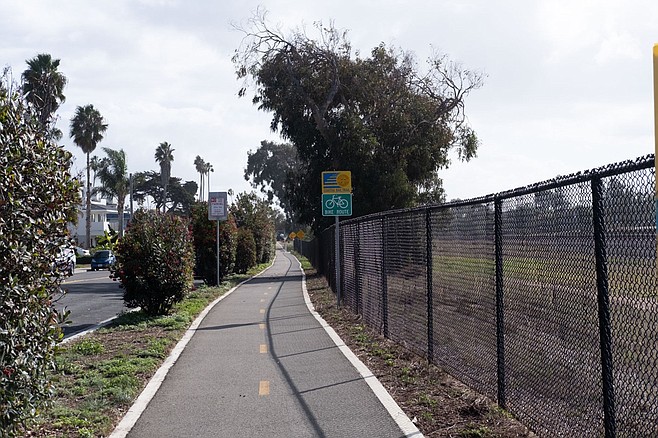 A Class 1 bike trail is separated from traffic

The easiest way to explain the various conditions of each segment of this hike is to describe three classes of bike trails. Class I bike trails are physically separated from vehicular traffic by barriers or distance. The most common are Class II bike trails, which feature separate bike lanes on roads or highways, designated by signage and painted road lines. Class III bike trails are roads on which it is considered safe for bikes and vehicles to share a lane. Almost all of the trails described here are paved, usually with asphalt or concrete. Most are well maintained and largely free of potholes.

Find the Coastal Rail Trail at the northeastern end of Tyson Street, just across the railroad tracks from the Oceanside Transit Center (see Northern Section map). This relatively new Class I trail runs parallel to the railroad tracks, extending south 1.5 miles to Oceanside Boulevard. Be careful crossing Wisconsin Avenue, as cars have the right-of-way over pedestrians or bicycles. Turn right (west) on reaching Oceanside Boulevard and go three blocks to South Pacific Street. Turn left (south) on South Pacific Street, a Class III bike trail (which means you must be vigilant, as bikes and vehicles share the travel lane). In about 0.4 mile, you arrive at Buccaneer Beach, Park, and Café. Hikers might want to stop here and explore Loma Alta Creek, just north of Buccaneer Park. On quiet days, you might see red-winged blackbirds, or even an occasional snowy egret, among the bulrushes lining its banks. Moving on, turn left onto Morse Street, just south of the park, and continue up a short hill where Morse Street becomes South Meyers Street. About 50 feet from the start of Meyers Street, find the short Class I bike trail on the east side of the street. In roughly 0.4 mile, turn left on Cassidy Street, cross the railroad tracks, then go right on the Class I trail along the west side of Broadway Street. This off-road bike trail ends at the West Vista Way intersection. Instead of turning on West Vista Way, continue down Broadway Street to Eaton Street. Go left on Eaton Street, and in two blocks you will find another Class I bike trail, on your right. It is parallel to South Coast Highway, now signed Carlsbad Boulevard, and continues south across the Buena Vista Lagoon. 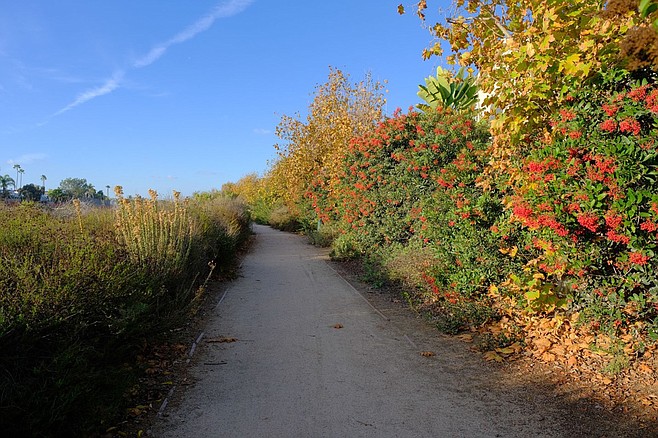 A traffic circle, with an art piece called the “Coastal Helix,” greets you at the south end of the bike trail (see Middle Section map). As you go around the circle, you must choose an exit. First, you come to the exit for Carlsbad Boulevard, a Class II trail and the most frequently used. It continues as a lane along Carlsbad Boulevard, with outstanding views of Carlsbad City Beach and out to sea.

Going further around the traffic circle and there is an exit onto State Street, a Class III bicycle route with comparatively little vehicle traffic. It may be safer than the route on Carlsbad Boulevard, but you will miss the ocean views. Also, the street is closed to bicycles and vehicles Wednesday afternoons, from Grand Avenue to Carlsbad Village Drive, for a farmer’s market held there. This same section of the road can be very congested on weekends and all summer. From the State Street trail, continue past Carlsbad Village Drive to Oak Street and turn right. In less than 50 yards, you reach the entrance for a Class I, 0.7-mile segment of the Coastal Rail Trail which continues to Tamarack Avenue. Turn right on Tamarack, go two blocks to Carlsbad Boulevard, the South Coast Highway, then make a left turn. Continue south on the Class II, Carlsbad Boulevard bike trail. In a few blocks, you pass the Hedionda Lagoon, site of a commercial mussel farming operation as well as a fish hatchery, the Cabrillo Power generation plant, and a water desalination facility. 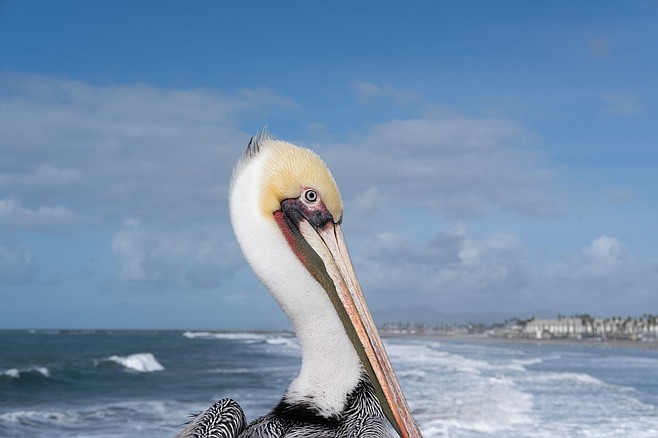 A brown pelican watches the beach

After Carlsbad Boulevard reaches its intersection with Cannon Road (see Southern Section map), your view of the ocean is blocked by large homes on your right. This obstruction continues until you reach the Cerezo Drive intersection. After thatm you have an almost unrestricted view of the ocean until you reach Island Way. At roughly this point, the Carlsbad State Beach Campground begins between the ocean and Carlsbad Boulevard, obstructing your west view, unless you detour through the campground. (The campground does offer toilet facilities as well as beach access.) Although Carlsbad Boulevard and the bike trail continue to Poinsettia Lane and beyond, hikers and walkers should consider taking a detour west at Cerezo Drive to follow a dirt trail along the dramatic sandstone cliffs of the Cerezo Bluffs. This roughly 0.25-mile trail eventually merges with the Carlsbad Boulevard trail and continues to Poinsettia Lane and beyond.

For out-and-back bikers and hikers, Poinsettia Lane is your half-way mark. You can turn around and go back the way you came for a 14.8+ mile journey: short for well-trained bicyclists, but a moderately strenuous walk because of the distance. If this is your end point and you need to get back to your vehicle in Oceanside, the best way to do so is to take the train, as you are near the Poinsettia Coaster Station. Good news: you can take your bike on Coaster trains. To reach to the train station, turn left on Poinsettia Lane and go east, over the tracks to Avenida Encinas. Cross the street and find a signed, well-maintained dirt trail at the northwest corner of Poinsettia Lane and Avenida Encinas. This trail will take you directly to the train station. It is a Class I Carlsbad bike trail that passes through coastal sage scrub vegetation and near some rare vernal pools. If you are thinking of using this way to get back to your vehicle, be sure to have a Coaster train schedule with you before you start. 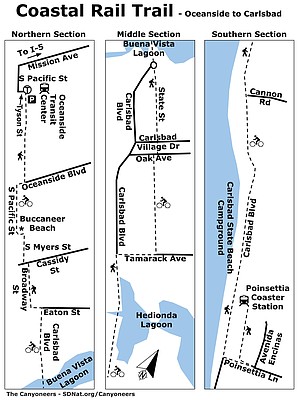 This trail has both bike and hike options with ocean vistas.

North county transit was already paid to complete the Escondido to Oceanside link and they have squandered the money and failed.