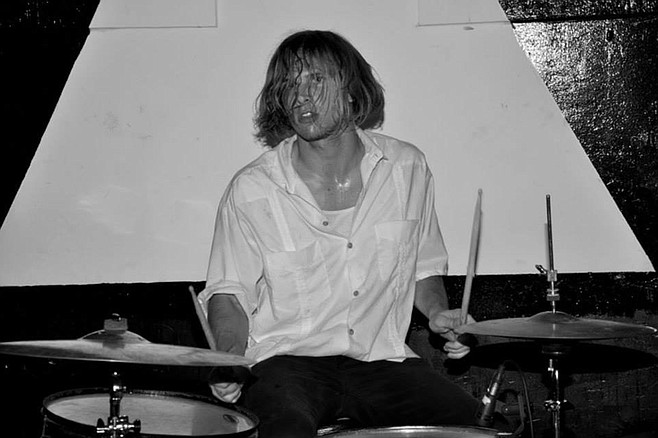 Glam meets feral for Michael Peterson and the Natives

It’s hard to look “edgy” and “nice” at the same time. In fact, it’s almost impossible. Which is why it’s so impressive when someone pulls it off consistently.

Michael Peterson, member of the San Diego-based band the Natives, is one of these guys who does. Peterson, who drums like a witch doctor in the throes of possession, dresses like your boss. And yet, you’d never mistake him for an office type.

The look is sort of a shroomed-out version of a social media manager. He’s transitioned (like his top dollar Ray-Ban transition lenses) from ‘70s punk rags to Oxford shirts and John Varvatos dress shoes. He describes the look as “a little more glamorous, a little less anti-social,” and credits his girlfriend as a guiding influence.

The key, he says, is to be just a little bit feral. When I spoke to him, he was excited about a new faux gold chain he got from a swap meet to replace the one that was stolen off his neck in Tijuana. He supplements a smart-casual baseline with these flashes of color, like a leopard print shirt he just snagged on sale for $20.

He looks like he belongs wherever he happens to be, from the East Village of downtown, where he lives, to the bars and music venues where his band plays.

Like Mike, The Natives have undergone a facelift. The band is known for their frenetic sound, which has matured into something Michael is calling “electro-punk.” These days, they’re more Primal Scream than G. G. Allin. The four piece is gearing up to record a new single, “It’s Starting to Hurt Us.”