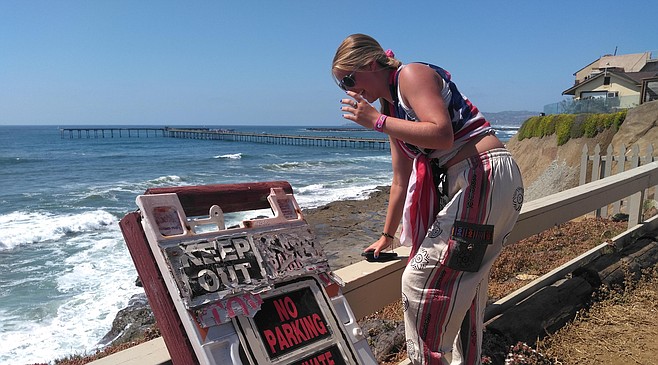 Can't find the geocache on the OB Pier

Not just the Muggles are stumped

Over the last several months, I’ve noticed people looking for something on the edge of my property in Ocean Beach.

First, an older gentleman was poking around the fence and bushes with a long stick while looking at his phone. He had a clipboard, a pen, some sort of equipment on a roller and appeared to be on a mission. 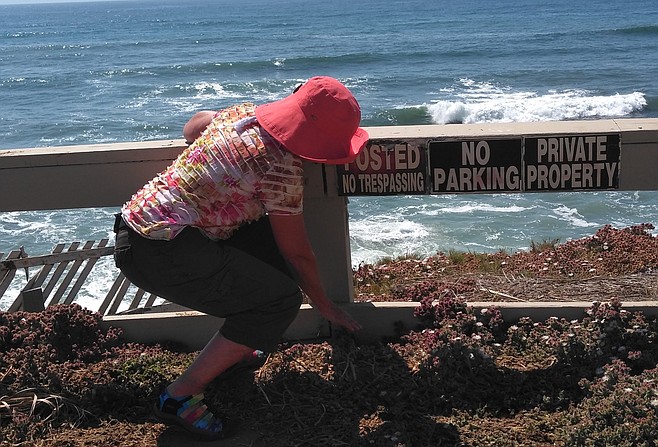 Grandma Judy: "You don’t put your real name in."

I asked if he needed help with anything, and he said, no, he was “looking for a geo-cache that was hidden along the brown fence.”

A what? A geocache?

Geocaching has been around since May 3, 2000, when it was first played in Beaverton Oregon. It’s an outdoor recreation activity where players use GPS to treasure hunt for cleverly hidden caches.

When I spotted Jaley with Grandma Judy over the 4th of July weekend, looking at their phones and leaning over the fence, I knew what was up this time and asked them for more info. 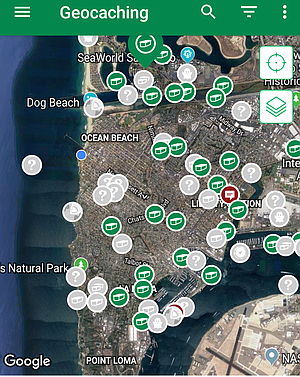 The one “near the brown fence” was last logged in back in 2014, just prior to the bluff collapse.

“An adventuresome game,” added Grandma Judy, “You log it in online too, so you can see if other people found it, you don’t put your real name in – most people don’t anyway… It’s a great family activity it brings people together to explore.”

“It’s super fun,” Jaley continues. “The problem is a lot of people don’t take it seriously, and they don’t know anything about it, so they’ll take it [the cache] or remove it and then it’s a problem-so that’s why you’re supposed to be like secretive, you go and grab it, walk away then write your name down and put it back. And even some people know about it but then they just wanna mess it up anyway, and that’s not fun”

There’s even have a name for these people.

“They’re called Muggles,” Grandma Judy interjected. “Muggles in Harry Potter series are the people that are not the magical people, normal, everyday people, it’s basically people who are not in on the game.”

The game is simple. Create an account to view geocaches near you, use the app to navigate to its location, sign and date the logbook, add something to the geocache, and take an item. 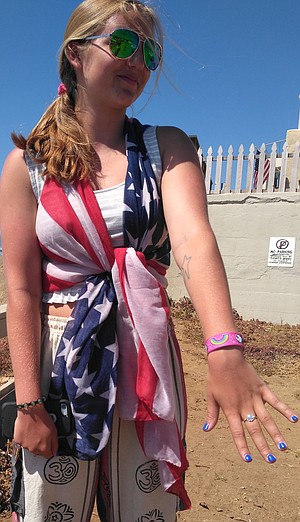 Jaley: "I was going to put another bracelet in there."

“We have a cabin on a lake and it’s on an island, its up in really north in Minnesota,” Jaley tells me. “We went like around and boated and found a couple in the campsites up there; it was really fun. It's like we never would have went over there and seen that part of the island if we weren’t doing this. A lot of them teach you about the area, you learn something about this national park or you learn something about the cliffs and it’ll have descriptions on there describing the story behind it.

A lot of times it's one person placing it there and then they have to keep maintaining it, like check on it every couple months to make sure that its still there and so yeah they will have descriptions on there and stories about why they made it, why its special…. I found this bracelet in the last one, it was full of trinkets, I was going to put another bracelet in there but I had a bunch of quarters so I used one of those.”

According to the official Geocaching website, there are 5,821 geocaches in San Diego.

“Oh, yeah, there are more in OB,” Jaley says. “Some of them are really easy, grab and go is what they are called – they’re usually in the light fixtures, you lift up the square at the bottom, a lot of them are like that, and then there’s the question mark ones that are more difficult. Like we have been trying to figure out the one on the pier, we don’t think it’s on the pier though; we thought maybe by the green cottages along the end of the pier, but we couldn’t find it.”

The two question mark caches have not been located. The one “near the brown fence” was last logged in back in 2014, just prior to the bluff collapse, which took the brown fence with it. The one near the pier remains a mystery; if it was placed on the pier, it may have been washed away with the massive waves that damaged it earlier this year.

Megan, who lives in OB, says there are several throughout OB and Sunset Cliffs.

“Yeah there are actually several throughout OB. There are a number along the water that goes from under the pier and all the way down to Sunset Cliffs. My friend came out from Florida and we did some caching. It’s a great way to meet people… A lot of them will give you some history on the location the cache is placed…it mostly was a great way to meet people and spend an afternoon with people we didn’t know. We met up at the end of the pier and had 10 others join us!”