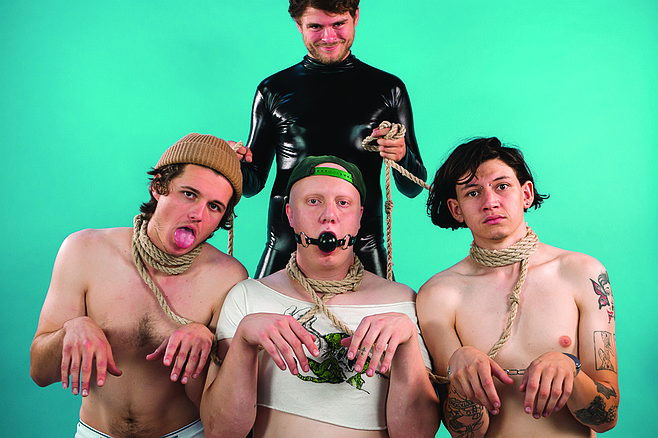 The loony and chaotic ways of On Drugs

“I always joke and call it flat-Earther rock”

When Derek Housh, Cameron Gates, and Elias Avila started creating music together it was noisy experimentation for the most part. A plan was launched for the trio to relocate to Maryland, but Gates and Avila abandoned ship at the last moment. Housh carried on and ended up waiting tables at a sushi restaurant — and little else. Avila convinced him to move back to San Diego, and offered a unique lodging deal.

“I didn’t have anywhere to live or any money. He said he had a tool shed that he was living in and that I could move into that with him. So we shared this tiny tool shed with just one futon in there.”

Once Housh was back in San Diego, the band got to work. The group’s noisy, garage-punk lent itself to fans of Fidlar and the Oh Sees. As they began gigging out, they found themselves playing more shows south of the border in Tijuana than they did in their hometown. “It was just more of the type of music and arts scene that we wanted. It was an older crowd. There seemed to be a lot more passion, and it was just easier to book too.”

The original name of the band was “Seyonce”— a moniker derived from a stoned night where Housh was singing Beyonce lyrics over droney noise music they were jamming on. The name stuck for a little while, and Seyonce even came close to releasing an album. All the recordings were obliterated due to a computer crash though, forcing the band to start over from scratch. The second attempt was a self-produced effort soon after they had relocated to Portland. They all hated the finished product.

“We’d all been so DIY for so long that we thought the most out-of-our-comfort-zone thing to do was to find somebody to help us produce the record, and pay a bunch of money for actual studio time — which I think was also a really good decision. So the third attempt to make a record was the first On Drugs album that came out.”

The third attempt, 2017's Stay Yuck, may have been the band’s debut as On Drugs, but the just released Uckhole Futah is the group’s first full-length that sounds like it needs an actual intervention. The collision of math-rock, humor, and west coast punk is loony and chaotic in the best of ways.

“I always joke and call it flat-Earther rock,” Housh explained. “It’s kind-of science-based, but it’s really stupid. I think one big thing that helps is that there’s not one main songwriter in the band. It’s all of us bringing stuff forward. It’s really the [songs] that we all wrote together that were really psychotic, almost like you’re listening to an old radio and you’re changing the stations and it’s jumping back and forth between different songs.”

On Drugs and Mikey Carnevale

The band will be making a trip back down to their old stomping grounds for a February 16 show at SOMA, the site of Housh’s circle-pit baptismal. When he was 12 years old, his dad brought him to a Social Distortion show there. His father told him “Alright, we’re going in. We’re doing this.” Housh obeyed.