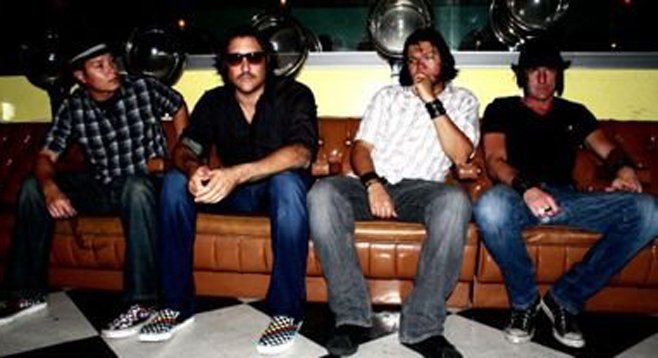 “The new Secret Seven album, How to Imitate Thunder, is a hundred percent completed. I’m just finishing up the track list and artwork,” says Zachary Goode. “I haven’t decided yet whether to release a physical copy or just do it online. Apart from a very small niche of record nerds like me, nobody seems to obsess over packaging the way they used to, so I may just cave in and go digital-only.”

Goode says his relocation to L.A. six months ago (“I was ready for a change after 21 years in San Diego”) essentially left him the sole permanent member. “I had a killer band that recorded this new album with me, but they’re all San Diego–based, so I need to start from scratch again. I’m in the process of finding all new band members to play the album live.”

Not that Goode has necessarily “gone Hollywood.” “I’m still playing with Geezer, so I go back and forth every few weeks to play shows [in San Diego].” Why not keep a local roster intact for Secret Seven? “Living in L.A., it’ll be impossible to get together for band practice and songwriting unless I find some new players. It’s a lot easier in Geezer, because we’re playing covers, and we hardly practice anyway!”

An online video for the album track “Junk” was created using footage from the movie The Man Who Laughs. “That’s one of my favorite Victor Hugo novels,” says Goode. “When I discovered the film was public domain, I just chopped it up in iMovie and created a new storyline to fit the lyrics to my song.” The album also includes a Neil Young cover. “The version of ‘Winterlong’ we recorded is closer to the Pixies version they did back in 1990 for a UK B-side. I’ve always loved the song and used to play it for solo acoustic shows.” The video and song are playable on the Secret Seven’s page in the Reader’s online Local Music Database.

As for the album title, “It’s just one of those names that popped into my head and stuck. I’m hoping people don’t think it’s a Norwegian black metal album. They’ll be severely disappointed when they hear...theremin and harmonies.”