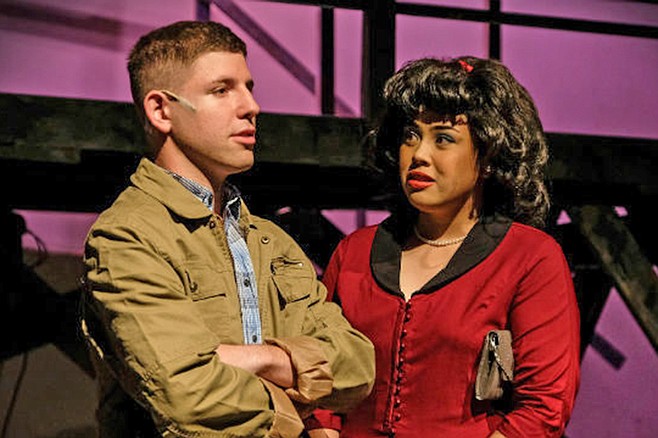 Is Dogfight harmless after Tailhook scandal?

The musical Dogfight at Coronado Playhouse is set in the early 1960s at the start of the Vietnam War. In this show, we follow a cast of characters who participate in a competition to find the ugliest date.

A “dogfight” was a tradition in the Marine Corps in which a party was set up at a dance club and the Marine who brought the ugliest date won the contest. The musical Dogfight is based on a movie of the same title. That movie came out on September 13, 1991 and starred River Phoenix and Lili Taylor. From September 5-8, 1991, a scandal known as “Tailhook” occured. The movie could not have come out at a more relevant moment.

The Tailhook Association was formed by Navy aviators in 1956. The organization evolved into a national association of naval aviators, with its national headquarters in San Diego at Scripps Ranch.

The 35th Annual Tailhook Association Symposium, in 1991, brought the insidious traditions of the military into the full light of the national consciousness. During the symposium, which was held in Las Vegas and was attended by over 4000 members of the association, 83 women and 7 men were sexually assaulted by over 100 Navy officers.

The officers lined the hallway of a hotel and women were forced to walk “the gauntlet” as the men groped and assaulted them. The revelation of the events at Tailhook led to sweeping reforms in the U.S. military.

By comparison, the tradition of the “dogfight” might appear harmless. It is not. It is the symptom of a mindset which is the complete opposite of the Marine Corps motto, Semper Fidelis — Always Faithful.

When I was in Marine Corps boot camp, from November to January 1990, I struggled to reconcile my ideals of service with the language used by some of the drill instructors to describe their interactions with women. Maybe I was a bit innocent, but I found the way women were talked about to be painful.

I brought the issue up in a private meeting with one of the drill instructors. To my surprise he said that he understood where I was coming from and would take a different approach. Then he made me do push-ups.

It’s impossible to tell that story without sounding insufferably self-righteous. I tell only it to emphasize that while we still have a long way to go, things are getting better. A show such as Dogfight, which humanizes the victims of these traditions, helps us get there.

Dogfight runs at the Coronado Playhouse through August 25.