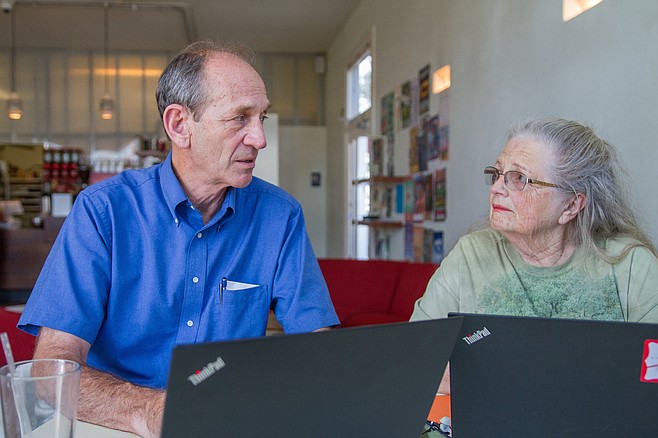 One will photograph and upload suspicious activity at polling stations

San Diego-based company Democracy Counts has developed technology its founders are convinced will restore Americans’ confidence in the legitimacy of U.S. election results.

Describing Democracy Counts as a nonprofit tech startup “that has developed the means to conduct same-day election and voter-suppression audits,” the organization’s leaders are making the rounds to grassroots political conferences and gatherings all over the country. 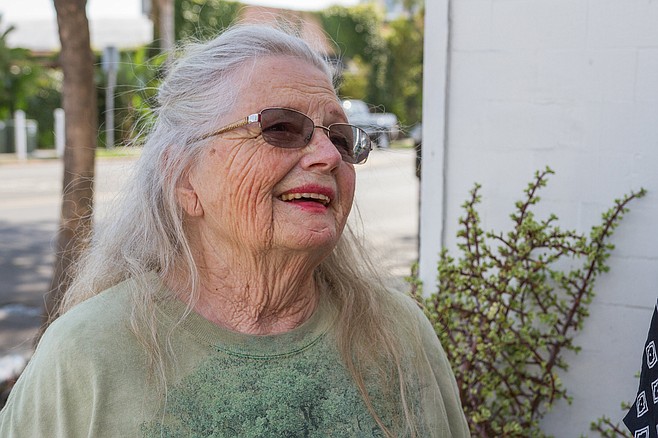 Anne Wayman: “When I met Dan... and he told me about Democracy Counts... I wanted to be part of that.”

“We have been chosen as finalists in the social-change technology category at Netroots,” says Democracy Counts chief executive, Daniel Wolf, a few days before he and his team would head out to Philadelphia this year. Netroots Nation is, roughly speaking, progressives’ answer to the conservative movement’s annual Conservative Political Action Conference. Democracy Counts hoped to make a big splash at the mid-July gathering in Philadelphia of left-leaning activists, policy wonks, ideas types, celebrities, and others.

Though he names no names, Wolf says his young startup’s visibility at the Netroots Nation conference piqued some interest. But Netroots is just the beginning for Wolf, a graduate of Harvard law school. “Our strategy is to build on that imprimatur to raise operating funds, to do more outreach and encouragement in Florida, as Florida is a critical swing state,” says Wolf. “We will do the same in the other swing states; our goal in 2020 is to have audits going in all the swing states.” 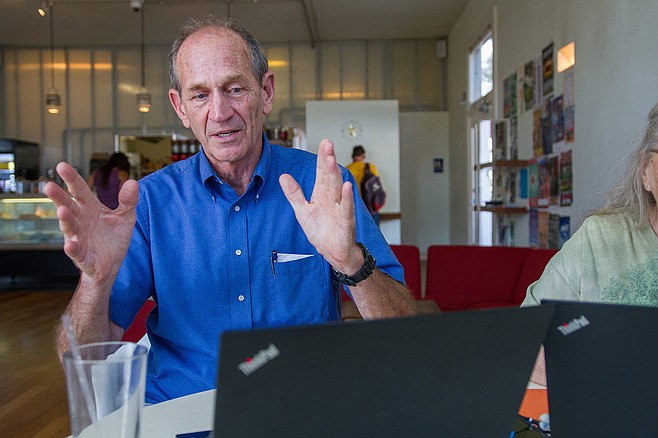 Usually when you hear someone say “Florida is a critical swing state,” the speaker is a partisan campaign official, political commentator, journalist, or analyst describing why it’s important that this or that candidate win the most votes in the Sunshine State. When Daniel Wolf or one of his colleagues at Democracy Counts utter those words, however, they mean that because Florida is a critical swing state, it’s momentously crucial for every vote to be counted accurately. “We’re fine with Florida voting any way it wants, but the people deserve to, A) be able to vote; and B) to have their vote counted accurately and let the chips fall where they may,” Wolf says. “Our interest is to make sure that the original goal of the Constitution — to establish a republic based on majority rules while embodying protections for minorities — is vindicated.”

Democracy Counts has a down-to-earth practical matter to attend if the group is to be successful at bringing its suite of five smartphone apps to bear on the problem nationwide. That matter is cash.

“We’re figuring about $1 million per state [operations] for Election 2020 plus a few million for operating funds for Democracy Counts [to ensure the organization endures after the 2020 presidential election],” says Wolf. “If we ignite a wave of volunteer efforts the price per state would fall by about three-fourths, because volunteer stipends are a substantial part of the budget.”

But the group’s budget is still nowhere near large enough to take on the task of traveling and building its presence across all 50 states.

“How close?” repeated Wolf as he entertained my question. “We’re struggling to find the money to get me to Philly.”

The entire team at Democracy Counts lives by the sound of an imaginary clock ticking off the minutes until the vote counting begins November 3, 2020. “God, it’s deafening,” says Wolf. “I have to practice Vipassana [meditation] to quiet the crash of the ticking hands to be able to keep working.”

Rather than letting herself get overwhelmed by Democracy Counts’ fund-raising goals, chief operating officer Anne Wayman, keeps her mind focused on the excitement she felt when she first heard about the project. “When I met Dan by chance and he told me about Democracy Counts... I wanted to be part of that.”

At the core of the project is a crowd-sourced, real-time suite of auditing and accountability apps that claim to be able to eliminate, or at least document, the starting point of one of the most glaring weak spots in ballot counting. A largely ad hoc procedure that exists between the printing of so-called tabulation tapes at polling stations where voters cast their ballots and transmitting or physically transporting to secretaries of state and other state elections officials who announce official results, is frequently a contentious link in the cast-ballot supply chain.

According to Democracy Counts, its five apps make that process almost impossible to intentionally tamper with or even inadvertently compromise. If true, that could ensure the accuracy of numbers on the tabulation tapes no matter how they’re transmitted or transported. Democracy Counts calls the five apps together, its “Vericount Election Audit System.”

The first app in the suite is called, “Poll Watcher.” It’s designed to allow “poll watchers to duplicate all the tallies collected by official poll workers, creating an independent record of polling-place results and revealing any post-polling tampering.” The next is the Exit Voting App. It “allows voters, upon departing their polling places, to re-record their votes, providing a [one-to-one] parallel count of the votes cast.”

Democracy Counts’ “Entering Voter” app is focused on documenting possible voter suppression in the form of long lines. As noted on the group’s website, that app within the Vericount Election Audit System, “records the votes of voters who are forced to stand in line for many hours and leave before casting their votes, thus providing potentially potent evidence of the effects of local government decisions to increase congestion and discourage voting.”

There’s an app for recording your vote inside the voting booth, if you so choose. The fifth app is for election monitors to photograph and upload suspicious activity at polling stations. It’s called the “Election Observer App.”

“I had the original idea, which came out of the intersection of my research into blockchain apps and my concern about the probable theft of the presidential elections of 2000 and 2004,” recalls Wolf. “Our system would have had limited but likely useful application in Florida in 2000, but it would likely have blown up the election in Ohio in ’04. It was the latter that I was thinking about when I thought of the idea.”

Wolf says ordinary people have until now been locked out of the process of verifying elections. “They had to rely on internal, non-independent audits often run by the same partisan officials who ran the elections,” he says. “Enron showed us what happens when audits are not independent.”

It’s doubtful every voter in America, let alone every precinct and county, will take up Democracy Counts’ call to action by utilizing one or more of its Vericount bundle of election-auditing apps. “In a perfect world we’d engage every single voter, every single candidate, every political party, and those who will soon be eligible to vote,” says Wayman. “I’ll settle for a large percentage.”

She says the group’s goal is to have audits in all the precincts in all of “whatever the swing states turn out to be.”

With a modest but admirable milestone under their belts now, confidence is growing at Democracy Counts. “We’ve just gotten our first organization dedicated to doing audits in a whole county,” Wayman explains. “Scaling is pretty much a matter of duplicating that umpteen times for 2020. We also expect to find groups willing to do audits in primaries across the country in preparation for 2020.”

Though clearly a nationally focused project and organization, Wolf says Democracy Counts is San Diego-born and boasts local DNA. “San Diego has vibrant startup and tech communities, but interestingly, in terms of tech participants, our most valuable local programmers have been associated with the U.S. Navy. An early super-important team member who still advises us is a civilian contractor for the Navy.”

Philip Rakita, met Daniel Wolf when the two men served on the board of the Fulbright Academy of Science and Technology. Just as eager as Wolf is to return confidence to national elections, Rakita believes same-day, voter-driven audit tools, like the ones Wolf is developing, could help restore faith in American democracy.

“Democracy Counts deserves to reach a wider audience for its mission,” Rakita says.

Following his contemporaneous tenure of service at Fulbright with Wolf, Rakita went on to become president of the Fulbright Academy of Science and Technology, eventually arranging its merger with the Fulbright Association. Along with the affiliated Fulbright Program, the organization is famous for connecting students, ideas, and ideals across international borders.

Leading the technology-focused organization before merging it with the mother-ship group gave Rakita first-had experience of a nexus between technology and democracy from which to size up Democracy Counts’ endeavors. “Probably the biggest challenge is recognition and understanding of what they are trying to do,” Rakita says, alluding to the difficulty of not only selling the general public on the concept that a suite of smartphone apps can ensure the integrity of vote counts; but also convincing voters to download and use the apps in and around their polling places — not to mention bringing on board at least some election officials in the more than 10,000 voting jurisdictions that exist across the U.S.

Rakita has promised to do what he can to help the project succeed. But he notes that there is no formal connection between Democracy Counts and either the Fulbright Exchange Program or the Fulbright Association. “Except that people who were exchangees and alumni of the exchange program, like myself, Dan Wolf, and others, support it and believe that Democracy Counts deserves to reach a wider audience for its mission.”

According to Rakita, Netroots Nation, the big progressive gathering that took place in mid-July, revealed that talent, energy, and money are currently being focused on traditional “get-out-the-vote” efforts for 2020. But, he says, something’s missing. “I attended the Netroots Nation convention... and saw many worthwhile measures being promoted to get out the vote: register minorities, provide sophisticated polling data, and polish messages; and all those are necessary and needed,” Rakita says. “But, if there isn’t a fair count of the actual votes, all that will be wasted time, energy, and money. Securing an accurate count of the ballots actually cast is the foundation of a fair election.”

No question that assuring an accurate ballot count is as important as get-out-the-vote efforts. And paper ballots are better than machine voting. Democracy Counts is doing a public service to ensure a fair election in 2020.

Good idea. Because as we all know, the USPS has never screwed up mail delivery.

Yea the USPS has failed to deliver some mail that is for sure. I would trust them before I would trust a machine that was produced by companies foreign and domestic that support one political party. One can always pick up a mail in ballot and drop it off.