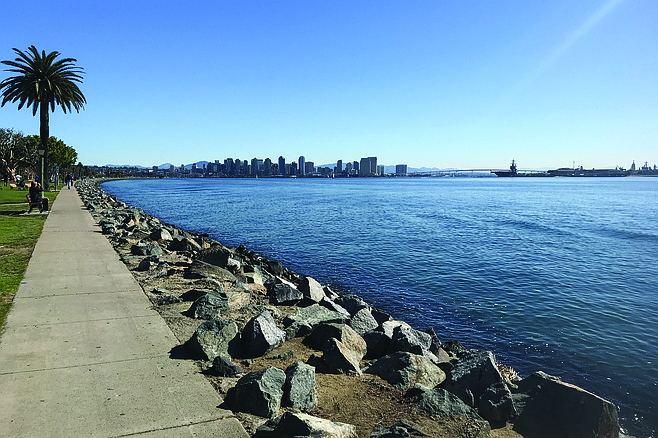 Walk the Embarcadero along Harbor Drive and the airport

San Diego Harbor not only bounds downtown to the west, it also marks the edge of a rich habitat. As you look out to the bay, you can see Coronado/North Island. Technically, the “island” is an isthmus, connected to the mainland along the Silver Strand, a natural yet narrow barrier that protects the harbor from the pounding waves of the ocean. The barrier creates a calm bay used for commerce, military, and recreation for over a century and has been a sanctuary for wildlife for over a millennium.

There are many places you can start, but if you park in the small parking lot near Laurel Street, a sign provides the names and pictures of the wildlife you might see. There are shorebirds like the black skimmer, brown pelican, California gull, double-crested cormorant, great blue heron, least tern, lesser scaup, light-footed clapper rail, marbled godwit, peregrine falcon, surf scoter, western grebe, and western sandpiper. On the near shore, you might see marine mammals like the harbor seal and sea lion, or mollusks like the California mussel in beds on piers and rocks. Far more wildlife lives beneath the surface, such as barred sand bass, bonito, brittle stars, and yellowfin croaker. Keep an eye out, because you never know what you might see.

Heading south, the first sights are the airplanes landing. This is how many contemporary travelers arrive on the shoreline. For out-of-town guests or residents looking to explore, you could start this tour at the airport. The Embarcadero walkway runs along Harbor Drive just outside the airport.

The Embarcadero offers a concrete paved walkway that runs right along the waterfront. The first stop is the Maritime Museum, where the Star of India, the ferry Berkeley and other historic vessels are docked. The Star of India is the oldest ship that still sails regularly and, according to the National Historic Landmark records, she is “the oldest iron-hulled merchantman afloat in the world” (National Register Number 6600023).

Continuing south, next are contemporary vessels, ranging from large cruise ships to smaller harbor cruises that regularly dock or depart from the terminals. Before the Coronado Bay Bridge was built, the ferry, which still runs today, was the main connector between downtown and Coronado. As you walk along the Embarcadero, keep an eye out for Navy ships, fishing boats, yachts, sailboats, and other vessels that call this port home.

Continuing south, enjoy walking the Broadway Pier (facilities and services available). South of the pier is the USS Midway Museum. Active from 1945-2002, it is the only carrier to have been in service the entire length of the Cold War. San Diego’s military heritage traces back over 150 years to the first instillations on Point Loma in 1852 and remains an important part of San Diego’s waterfront to this day. Beyond the aircraft carrier is Tuna Harbor, another foundational industry in San Diego. Tuna fishing flourished through most of 20th century, declining in the late 1970s, and suffering a major blow when the last cannery closed in 1984. The walking tour continues along the edge of Seaport Village, a shopping district filled with shops, restaurants, and a relocated carousel with hand-carved animals (originally built in 1895).

Return the way you came or take public transportation back. This walking tour is great any time of the year. 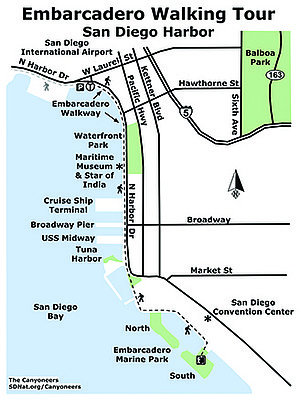 Enjoy great views of the harbor from the shoreline