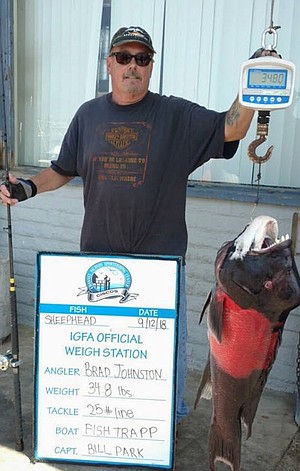 Saltwater: Yellowfin and skipjack tuna have been the main aim of the overnight to 2.5 day fleet; yellowtail, dorado and an occasional bigeye tuna are coming over the rails as much by-catch as anything. More boats are going out and south as the bluefin bite off Cortez Bank and San Clemente Island slowed a bit. The 2018-2019 recreational season for California spiny lobster runs from the Saturday before the first Wednesday in October until the first Wednesday after March 15.

Though the list can be long, especially for a kayak angler, planning a lobster hoop-netting outing will boil down to these:. First, less current is better because the bugs can cover more ground in their search for food, so pick a tide phase with a difference between the high and low tides of four feet or less. Pick the better night and avoid those with rough seas and or stiff wind. If it’s rough outside, try along lee of the jetties at either bay entrance, and the riprap inside the bays can hold some good size bugs.

The best places to set hoops for spiny lobster are in the flats adjacent to reefs. Spiny lobster do not maintain a permanent den like their east coast cousins. Instead, spiny lobsters hole up in a different spot every day after traveling up to a half mile at night. Given the number of sheephead around our kelp beds and reefs, there are plenty opportunities for a lobster to become a meal. Other reef dwellers, including the giant seabass and broomtail grouper, will devour a decent sized bug. Thus lobsters avoid the reef at night and roam and scavenge the flat spots along the reefs. You should set the hoop in flat sand, within 100 yards of reef, jetty, or riprap.

A sigh of relief in the lobster community as there was a potential world record California sheephead caught on September 12 off Ventura. Angler Brad Johnston hauled in a monster 34.8 pound goat from Captain Bill Park’s Fish Trapp.

Fish Plants: None this week