Old School fish, new techniques to get them 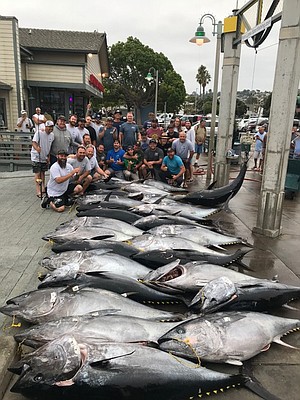 Saltwater: The Vagabond, Searcher and Top Gun 80 (and others) have been working Tanner Bank and just to the southwest of San Clemente Island for the large bluefin tuna that are cruising through the area in small packs as they often do. It appears the bite off the south end of the island has shifted more toward the Cortez-Tanner area, at least when targeting the big cows. The smaller bluefin tuna run in larger schools and aren’t as boat-shy as the larger units that tend to swim in twos and threes, and over the years the angler’s technique has adapted.

When a school of bluefin are mixed, that is with 30-50 pound fish and others over 100 pounds, you can often get a large fish on a live bait, jig or popper close to the boat, but when fishing the larger fish moving in small groups, the angler needs to get a bait out and away, or, down and away. The out and away part is done with the aid of a kite or balloon used to take a bait out and away from the boat. Two rods are used when kite fishing; one for the kite and the other with the bait or lure. The kite is flown back with the breeze or wind on the drift, or they can be trolled behind when the wind is calmer.

First, the kite is flown back behind the boat. At a desired distance the release clip is attached to the kite line and the angler’s line with bait or lure is attached to the clip that opens with the weight of a strike and releases the line. The point is to keep the bait on the surface and away from the boat for the best odds of hooking a wary cow bluefin tuna. The captain usually keeps the kite to an angle off the stern and positions the boat or takes a heading where the kite and lure, usually far away, can be seen. Most often the lure of choice is a rubber version of a flying fish called a Yummy Flyer and these work best when skipping across the surface to mimic the movement of excited flying fish. When they get hit it can be unnoticed in the distance other than the kite bobbing, but usually, there is a huge splash as the massive fish hits and the clip releases.

At that point, the angler needs to wind fast to catch up the slack created when the line held at an angle by the kite comes free. Then, shortly, the angler will know if the hook is set or it was a missed opportunity. Kite fishing on a sportfishing boat is done in rotations just like trolling, except that usually only two kites are out due to tangling, whereas four rods and a couple boat lines might be used on a boat with a 20-foot transom.

Other than the kite fishing, big bluefin have been caught when drifting at night on heavy flat-fall jigs. These lures drift down and away, wobbling as the slowly descend into the depths. With the boat less noisy and in deep water, the big tuna will often be less wary and as they feed through the night, this tactic works well when stopping on meter marks or just sitting at night waiting for dawn to start looking around. Both the flat-fall lure and kite fishing are new techniques to the San Diego area.

The old school tuna fishing of the 1950s through into this century in our waters consisted mostly of trolling cedar plugs or feathers until bit, then fly-lining a live bait on the stops. But given these big bluefin around that haven’t shown in these numbers or size since possibly the late 19th to early 20th century, the Yummy Flyer and Shimano flat-fall jigs are the ticket. A recent Vagabond trip tallied 49 bluefin tuna, with 29 cows over 200 pounds. The largest fish on that five-day trip was 276 pounds.

Elsewhere out there, the Coronado Islands are producing good yellowtail, and just a little south and west from there, yellowfin tuna, skipjack tuna and dorado are biting well for the full-day to 2.5-day fleet targeting them.