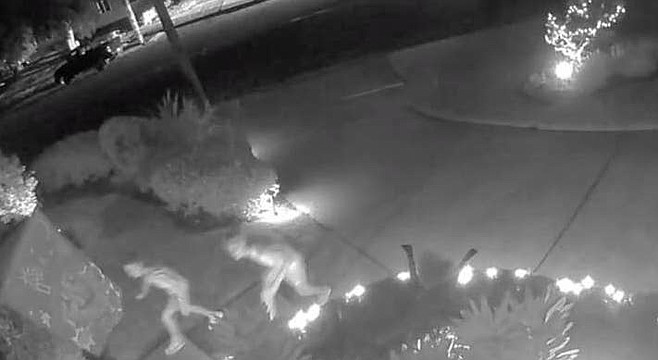 Used to roll them down Talbot Street, now it's high school track

A posse of teens went on a pumpkin-thieving spree Sunday night in Point Loma and stole dozens of the gourds from porches and yards before hurling them onto the Point Loma High School track.

It started around 8 pm on Sunday evening, Oct. 21, when Meridith’s pumpkins were swiped from her porch at Narragansett (between Chatsworth & Catalina.)

“A crew of teenagers or young adults just stole several 30+ pound pumpkins off my front porch,” she shared via social media. “Threw on their hazards in the middle of the street & walked up. I saw them as they were jumping back into their smaller silver SUV or mini van.”

When asked, she told me she didn’t do anything because she initially thought it was a prank. “I didn’t open the door because I could tell they were young kids and thought they were coming to ‘boo’ us (leave a bag of goodies on the door). I saw a girl crouched down & figured it was one of my girls’ friends. I waited maybe 5 minutes to go to the front door & saw the pumpkins were gone.”

According to witnesses, there were 5 individuals, including one female, involved in the spree that evening, driving the same White or Silver SUV.

Neighbors chimed in on Nextdoor:

‘Talbot Street too off of Catalina stole our pumpkins.’

‘Mine got stolen last night. Two of the pumpkins were about 30 lbs.’

‘Three big pumpkins are missing from our steps too! We are on Santa Barbara near Catalina. They left one tiny one.’

The fate of the pumpkins was discovered on Monday morning.

When asked about the incident, Hans Becker, Pt. Loma High principal told me, “On Monday morning, our custodian found a lot of them, I’m not sure how many were there, but yes there were quite a few pumpkins smashed on the track. We tried to clean it up before the kids got to school so we didn't take photos. We’ve gone over all the security footage, we don’t see any activity on there, so best guess is that they tossed them over the fence onto the track, the tradition used to be they’d roll them down Talbot Street, not sure why they targeted the track this year.”