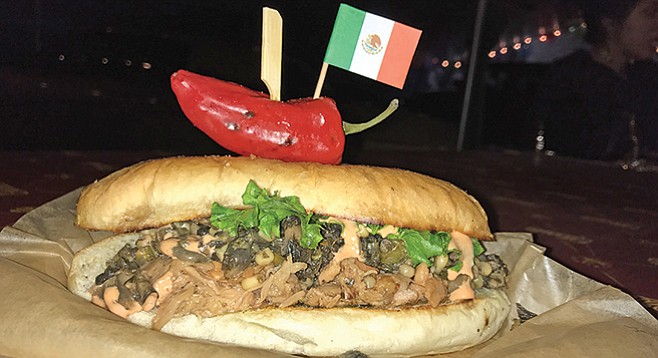 This is the best danged torta I can ever remember eating.

I know because I’m sinking my fangs into a torta that’s drooling with it: huitlacoche. That’s a Nahuatl name meaning “sleeping excrescence.” It grows on the yellow kernels of corn. 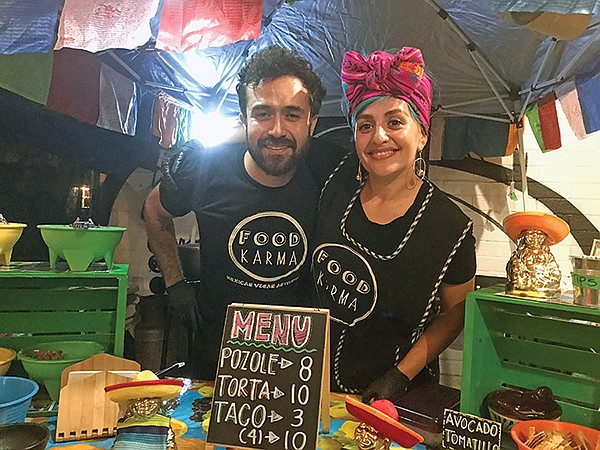 Actually, I was on my way to Border X, the Barrio Logan brewhouse, Thursday night. That is when Bill Caballero leads his Cuban jazz group, which you can listen to while you slurp some of their dee-lish Abuelita’s Chocolate Stout with its cinnamon thing going on. Plus, they have Tury’s Tacos out back, so you can eat salsa and dance salsa at the same time, heh heh.

But here across Logan — between Salud, the taco place, and the Don Diego VFW — they’ve got a Thursday night Flea Market going, right next to Por Vida, the coffee joint.

On Thursday nights, Por Vida has open mike, so guitars and voices are bouncing out onto the street as I come into the flea market tent. It looks merry, with pennants strung from pole to pole. The huitlacoche place is in a pop-up tent at the end; it’s called “Food Karma.” The owners, Fernando and Elena, are dealing with a line when I come in. Fernando’s taking orders, Elena’s flattening masa balls into tortillas in a wooden press. But you’re most aware of colors. Tent’s blue, pennants are every color, shelves and bowls are green, and Elena has wrapped a red bandanna around her head. 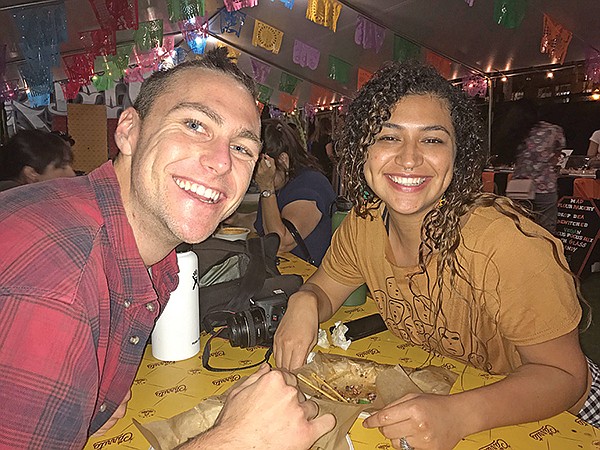 “Any ideas?” I ask a guy and gal waiting in line. Mikal and Stephanie. “Torta,” they both say. “Or the tacos. They’re both the same filling tonight. Huitlacoche!”

“Mexican vegan antojitos,” says the slogan on Fernando’s and Elena’s black tee shirts when I get to the front. Uh oh. Vegan. I mean, I believe in it, but when I’m hungry, I get less pure. Flavor-free nuts and twigs? “Yes, we’re vegan,” says Elena, “but tasty, I promise you. We come all the way from Mexicali with this food, driving two hours at least. We wouldn’t take the trouble if it wasn’t good.” 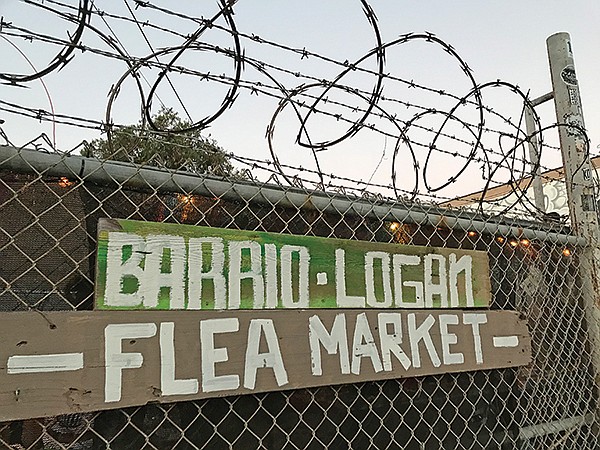 So, pozole? But really, I think of that as hangover cure. “What’s in the torta?” I ask.

Fernando launches into a sort of missionary’s sermon. “Huitlacoche. It’s what they call corn smut. It’s like a black mold, like mushrooms but not mushrooms. It’s a disease that attacks the corn, infects the corn, grows on the corn kernels, absorbs the corn. But for people, it’s healthy! It has more protein than corn, has amino acids, is an antioxidant, helps digestion, has lots of fiber, and tastes great. People say it tastes like truffles. And it was a delicacy for the Aztecs. They also used it as a medicine, to speed up a slow pregnancy and to reduce bleeding after childbirth. It’s only because it’s a corn ‘disease’ that North Americans don’t want to try it, yet.” 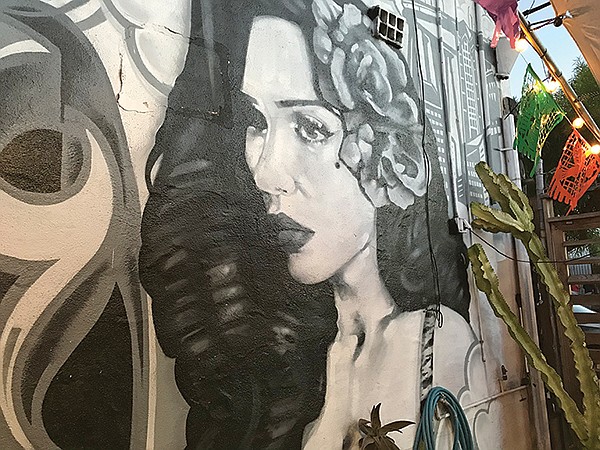 When you see this lady, you’ve arrived

“But in the torta, we mix it with other things,” says Elena. “Squash blossom, white corn, green jackfruit for a meat substitute. And then we put butter, mayo, cream, salsas, and vegan bread, or tortillas for tacos.”

Wow. Truffles, squash, jackfruit? Now I’ve got to try it. Ten minutes later, Elena brings my torta out. And I notice a sign saying “avocado, tomatillo,” so I stick those on.

“And maybe you’d like some of this,” says Elena. “It’s from Veracruz.”

I spoon a layer right across the inside top of the torta, next to the guac.

I head over to the long table where Mikal and Stephanie are finishing up, sit down on the bench, pick up my torta, and just look at it a moment. I see some corn kernels, yellow at the bottom, staining black at their top, some pink flesh — jackfruit? — a slurry of onions, looks like, some white corn kernels, and the gray-white-black mess that must be the huitlacoche. Plus the black slash of salsa macha, the green of the guac, and a lettuce leaf.

So okay, big breath, open wide, and — OMG. It does taste like truffles, but sweeter, coupled with the tart jackfruit taste, the corn, the guac. What a taste combo! So rich, so umami. But it’s the black stuff, the salsa macha, that’s the star. It adds a twangy heat, and a whole new nutty layer of taste.

Turns out salsa macha started out in Veracruz, way back. Like 1519, when Cortez landed there. Right after him came African slaves heading for sugar plantations and the mines. They brought sesame seeds from Africa, and peanuts from Brazil. The Cortez crowd brought olive oil from Spain, and the Aztecs had the world’s best chilies. And that’s the mix that makes up this wicked, thick salsa I can’t remember having before. And I would have remembered. Because I have to say, with the salsa macha, this is the best danged torta I can ever remember eating.

Mikal says he’s experienced the same rapture. “This is the most well-seasoned, most authentic Mexican vegan food I’ve had,” he says. He and Stephanie have just finished a plate of huitlacoche tacos, after dispatching a huitlacoche torta. “It’s oily, in a good way. Not soggy.”

“And you feel good about it,” says Stephanie. “Nothing died. You study the meat industry, you realize you’re eating pain. We came down all the way from Escondido for this.”

’Course then I notice a gal named Michelle at her “Mad Flour Bakery” at the next table. I have to grab one of her red velvet and cream cheese cupcakes with orange glaze ($3). Mmm. Just too tasty. But then I start thinking how Mexican chocolate stout would go with it, and how Cuban jazz would go with the chocolate stout. Just across the road.

Guess the night isn’t over.