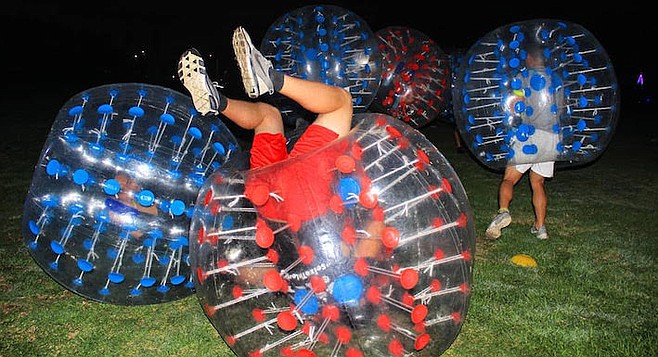 Running sideways a good way to stay inside the circle

On September 23, I saw eight alien-looking plastic balls with legs running around at east Mission Bay. 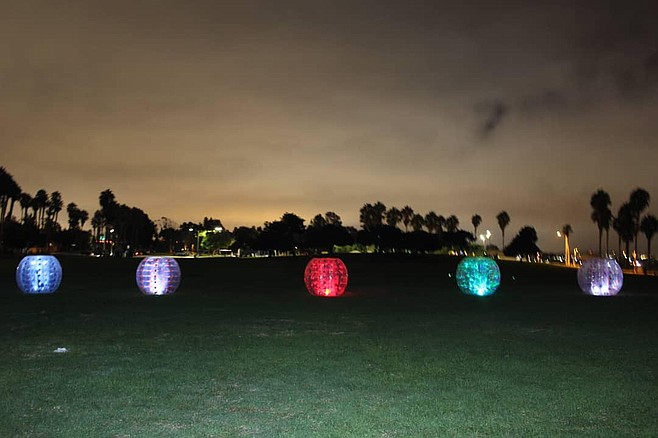 "Think basketball without the dribbling, and you wear a flag that can be pulled."

“This game is called Sumo Ball,” said Carlos Rendon. “The object is to knock the opposing team out of the sumo-ring and the last team standing wins.”

Rendon is a 29-year-old physical trainer from Clairemont. He founded A Synergy Affair, which practices teambuilding fitness.

Rendon has a few activities and games on his “recess for adults” agenda, but it seems that Sumo Ball is the most popular.

“Stay inside the sumo circle,” he advised his players. “If you do get bonked out you can still get up and just stay outside the circle and try to keep your teammates in (like a barrier). The last color remaining wins that round.”

Lamberto Aguirre, 24, played on the red team that Sunday.

“I run as fast as I can and stay low as soon as I’m about to bump into the other person,” he said. “Also, running sideways to avoid getting a direct hit from the front is a good way to stay inside the circle .”

The players are wearing zorb balls; which are five feet in diameter, made of PVC plastic, inflated by a pump. They are sold on eBay for about $150-$200 a pair and for Rendon’s bi-weekly meetups, he provides the space-age looking units.

“You can get inside and they go on like a backpack (with adjustable shoulder straps),” Rendon said, “they have two handles that you can hold on to so you can brace for impact.”

Aguirre’s team lost that night but said he’s stoked that he got a serious workout in. “I used every single muscle from head to toe and it gets hard to breathe inside the bubble ball.”

Rendon’s been a certified personal trainer for three years now.

“For those just starting, it’s a gateway into more serious fitness,” he said, “and for those who are more experienced, it’s an awesome way to get out of the everyday grind the gym-goers know so well.

” ….. we have ‘Don’t stop ’til you drop!’ which is a perfect warm up where the object of the game is to catch the persons stick next to you when you hear ‘Go!’ If you fail to catch the stick: you’re out. Then there’s ‘Glow Ball’ which has two zorb balls stacked and act as a basketball hoop. Think basketball without the dribbling and you wear a flag that can be pulled. If your flag is pulled the ball goes to the opposite team and the first team to score five baskets — wins!”

Aguirre is a lab-tech by trade and has been attending the “synergy” meetups since its inception last year. “It’s probably one of the few times where cardio is fun,” he said.

Their next meeting is at 6:30 pm on October 7 at east Mission Bay on the southside of the Hilton San Diego Resort & Spa; then on October 21. Slots are limited: contact Rendon at https://www.facebook.com/asynergyaffair/ for more info.