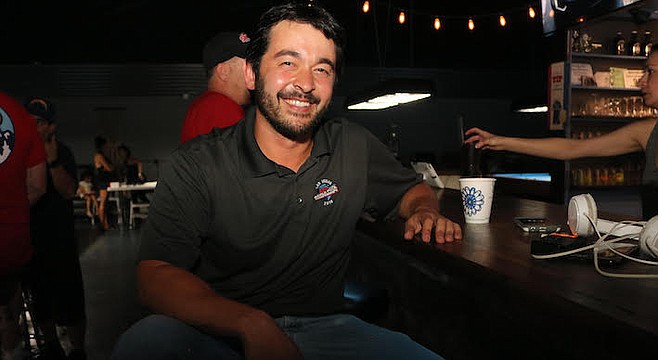 No Smoking did some pool halls in

On September 8, I shot some pool with the recently crowned 2018 American Poolplayers Association Team Captains Champions — at Pockets Billiards & Brew in Kearny Mesa. 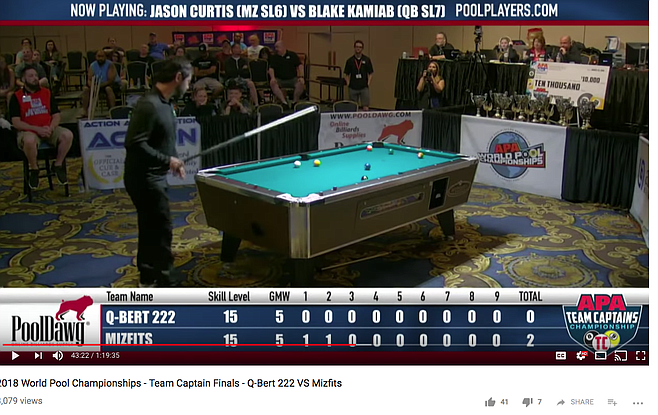 Q-Bert 222 in the recent championship game

The name of their San Diego-based team is Q-Bert 222. On August 12-14, the five-player team of pool-players beat out 384 U.S.-based teams that converged at the Westgate Resort & Casino in Las Vegas. 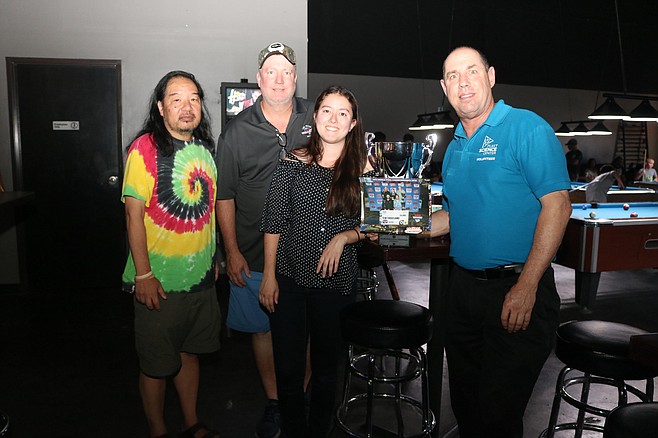 “The Q-bert part of the name came from the video game,” Phil Oh said, “the 222, although, we are not really sure where that came from.”

Oh, a cancer researcher by trade, shot the winning nine-ball shot to clinch the title in Las Vegas. 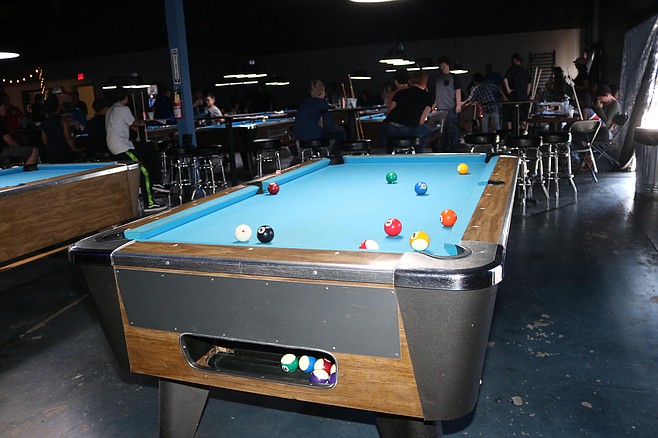 Pockets. “We have 12 bar tables and two big tables."

“I was nervous,” he said, “there were so many San Diegans watching us in the audience.”

Back home in San Diego many of the team’s friends and family were logged onto YouTube and Facebook Live to catch their home team play in the finals against Team Mizfits from Snohomish, WA.

“In this particular tournament, we alternated games between eight-ball and nine-ball,” Mel Roach said, “and it was a race to five (the first team to win five games won the match).”

Mel, 26, was the youngest on the team and the team captain; her father Jay was part of team Q-bert.

“I myself got a funky stroke (the movement of the cue stick),” he said. “I move many parts of my body and I’m not a very form consistent person. I’m very erratic, but it works.”

Scott Zuckerman, the fourth player has a pretty smooth stroke — most of the time. He works at the Fleet Science Center when he’s not running drills on the pool table: that’s when a player shoots certain shots over and over again.

“I have to work on my consistency,” Zuckerman said, “…. pool is all geometry and physics whether it’s spinning the ball, or the angle and speed, it all follows science.”

Blake Kamiab, the best player on the team, owes much of his success to remaining focused. “My phone had like 50 texts and over a hundred Facebook notifications,” he said, “I didn’t want to open it up during the game.”

Kamiab was rated a seven-skill level at this tournament, which was the highest.

Oh was ranked at a five-skill level, both Zuckerman and Jay ranked at a four, and Mel at a three — the lowest.

The teams had to choose their three players for a match, but the sum of their skill levels couldn’t surpass the 15-skill level threshold.

“At our tournament, there were different ways to get to 15,” Oh said. “You can play three five-skill level players, or a four-four-seven combo, or you can play a three-five-seven combo which is what we played.”

“For the first eight matches (that lead to the quarter finals), we alternated players,” Zuckerman said. “Then, the eighth match was played by Mel, Phil and Blake. They took it up a notch and won 5-1. “During the semi-final and final matches, me and Jay sat out, and let the three play it out because they were on fire.”

Pockets, the venue where they met and played pool on Saturday, is behind the VCA Eye Clinic for Animals on Kearny Mesa Road, north of Clairemont Mesa Boulevard.

“We have 12 bar tables and two big tables, and we are the only place in San Diego that has this many bar tables,” said Pockets owner Lila Woodland.

“Mike, do you remember Hungry Stick?” Brian Frankland asked me. “These are all the old seven-footers (tables) they had up until they closed. They were given to me when they closed down, and I turned around and gave them to this location.”

I responded: “Yes, I used to play at Hungry Stick, Star and Hard Times (in downtown), when I was a teenager in the 1990s, but what happened to all of the pool halls?”

“On Cue and College Billiards are still around,” Frankland said, “I think a lot of it had to do with the smoking laws. You know when you can’t smoke inside anymore people had to go outside. When you are playing hourly pool it’s tough to pay for hourly pool when you’re outside smoking a cigarette ….. and then the market crashed (in 2008).”

“The thought of the cigarette smoke in the pool halls makes me cringe,” said Jill Frankland (Brian’s wife), “but that’s how it was back then.”

The Frankland couple has been the San Diego league operators since 1996. “We now have more than 350 teams with more than 2500 members playing weekly in San Diego County,” she said.

I asked if the good players are coming from the hipster bars or the dive bars.

“Mike do you remember [the now defunct] Lou Jones Inn on Adams Avenue across the street from Rosie O' Grady’s?” Frankland asked. “A long time ago it was a one-table bar. We introduced APA in there and one of the bartenders started playing on a team and she started recruiting teams out of that location; before you know it there were 10 teams playing out of that bar and they brought in a second pool table. That place did great, but the owner was in her 80s and ready to sell the bar. She sold it to a guy who turned it into one of those [hipster] type bars and took the pool tables out — I think you’ll find a lot of those bars don’t have pool tables anymore.”

I played on a team for a while around 1995. They needed someone to stand in in case a member failed to show for an event. Nice people, but the reward wasn't worth the effort.

Before that, in the 50s and 60s, I played in Bensingers in Chicago and Cochrans in San Francisco and hmm, what was the name of that place at 11th and Broadway in San Diego? You know, upstairs from the Limerick bar? Hard core players there. Every worthwhile city had a real pool hall filled with smoke and the stench of stale beer and piss.

This was the time of Beatniks, before Vietnam, when hoboes rode the rails and coffee cost five cents. Pool sharks were a secretive elite who went wherever they might make a few bucks off some skilled but innocent yokel. They sometimes didn't have superior skill, but they had psychological advantages. Watching them work was like watching a great composer or artist. Mesmerizing.

But you couldn't always tell a hustler by watching. Typically they could wipe an opponent out quickly if they wanted to, but their skill required tact. They might patiently lose several games to give the opponent confidence. They might win by a very slight margin that the opponent would attribute to luck. The marvel of these professionals is that they suppressed their ego, that desire to show off, and that's how they made money. So watching them might not easily reveal their subtle genius.

I don't mean to demean College Billiards on El Cajon Blvd. Some good tournaments there with excellent players. Watching these tournaments was rewarding because each player was all-out doing his or her best. You could learn a lot. But it wasn't usually the sort of place for the hard core hustlers who traveled extensively and anonymously.

Those players were colorful characters who devoted their life to pool. And money. It wasn't easy to make money in the serious halls because everyone was hustling (see the movies). You might have to play for three days without sleep, winning and losing hundreds of dollars, before you could go home with a reasonable reward for your work. But the atmosphere was electric, addictive, it was a way of life that needs a better tribute than these feeble words.

Perhaps the best pool movie ever was "The Hustler" (1961) with the incredible talents of Paul Newman, Jackie Gleason and George C. Scott. I saw it when it first came out, and I was blown away. As some have observed, it's much more than a movie about pool sharks.