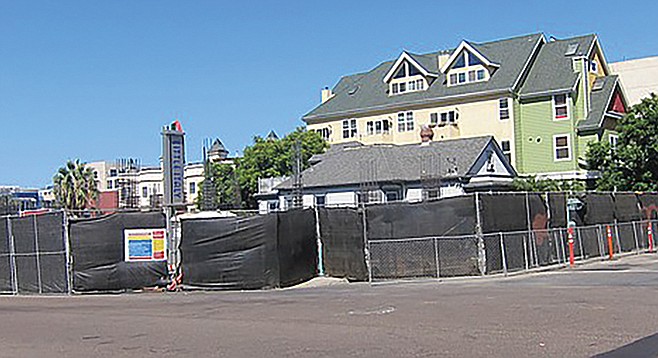 But not for the homeless

On a Little Italy plot where a Victorian house stood for more than a century, construction of tiny apartments is underway. The house, built in the 1890s at the corner of Union and Cedar, was demolished in February to make room for an eight-story micro-apartment building and a five-story multi-million dollar home. 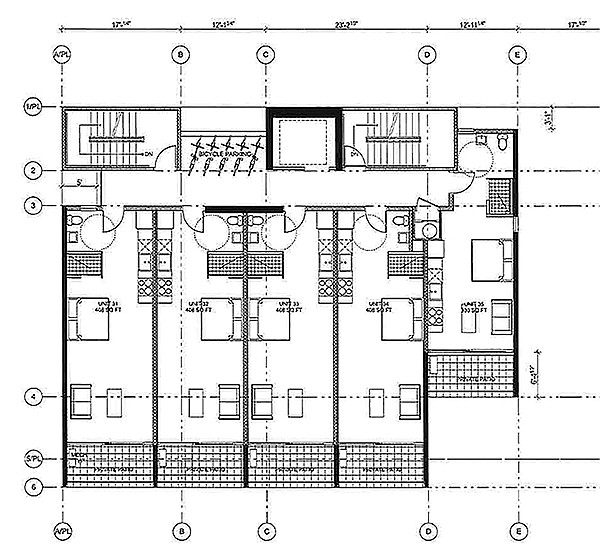 Layout of tiny apartments on the eighth floor. Note the tiny size — just over 400 square feet — and bicycle parking.

The apartments will be between 330 and 400 square feet. Unlike yesteryear’s single room occupancy hotels these units will have their own bathrooms, kitchens and private patios. The ground floor will have retail space.

Of the 42 apartments, two to five will be rented for around $700 to those with very low incomes. The remaining units will rent between $1500 to $2000 monthly. The developer estimated gross annual rent revenue at around $600,000.

A five-story single-family home with a roof deck will be built alongside the apartments. The ground floor will have the option of a rental unit or commercial office space. 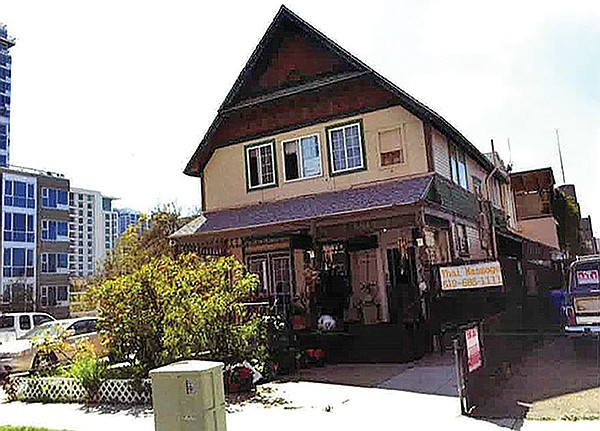 A massage parlor was located at the old Victorian house that was torn down to build the micro apartments.

By providing a few affordable units, the developer is allowed to build more density and little to no parking. While the house will have a two-car garage, the apartments will only have bicycle parking.

Steve Galasso, president of the Little Italy Association, said he doesn’t have an issue with the parking as there is plenty of underutilized parking nearby, including 700 spaces on Kettner and Beech that are available to the public weeknights and all weekend. There is a pay parking lot next to the project site, too. 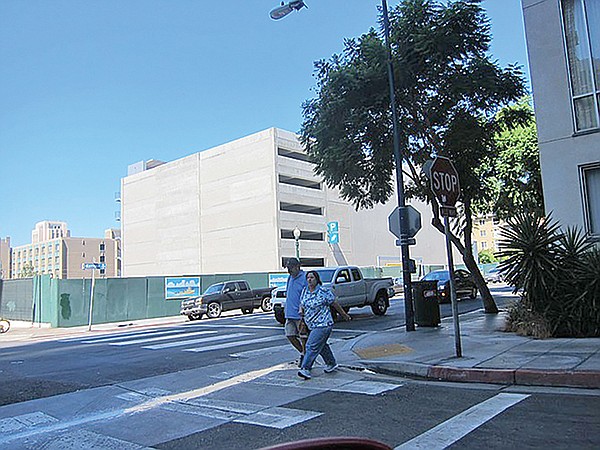 The Little Italy Association president claims there is an abundance of “underutilized” street parking in the neighborhood.

The project’s owner/architect Jonathan Segal said in a recent television interview, eliminating parking helps lower rent. While the economics of this makes sense, a developer not providing parking is usually a hot button issue at most public meetings as nearby residents worry about their parking woes worsening. According to one resident, it costs $200 a month to park in Little Italy. 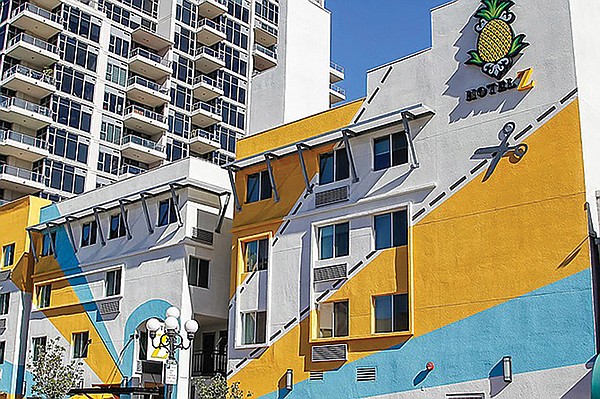 Candice was evicted from the SRO Baltic Inn so it could be turned into this trendy boutique hotel.

Galasso said the micro-units are nothing new to Little Italy. He pointed to similar developments including the 50-unit La Pensione Hotel on Columbia, developed by his brother Michael Galasso and partner Jim Barone in 1986, “to house those working in the neighborhood and many of the local fishermen, active and retired.” He said La Pensione hotels were built in 1990 and 1992 on Second Avenue (102 units) and in Little Italy on West Date and India (82 units). The latter was on the housing commission’s single room occupancy list in 2012 but was dropped when it became a boutique hotel (same name) with rates starting at $155 a night. 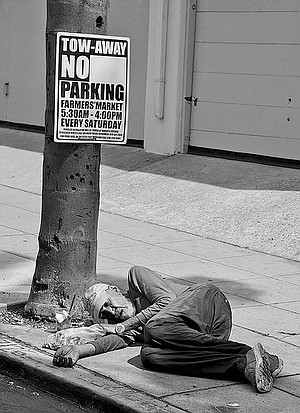 Single room occupancy hotels are disappearing while the number of homeless people on downtown streets continues to swell.

Galasso said the first newer single room occupancy building in downtown was the Baltic Inn on Sixth Avenue. “[It was] designed by Little Italy’s own Rob Quigley and developed by Chris Mortenson, who was a pioneer developer in the Gaslamp.” Mortenson was associated with many Gaslamp District landmarks, including the Golden Lion Tavern. The Baltic Inn is now a boutique hotel called Hotel Z. It opened in 2015 in time for Comic-Con.

Regarding the historic Victorian house that was demolished for the project, Galasso said, “The only history I know on that lot is that a palm reader, dry cleaner, and I think a massage parlor used to operate there since I came to the neighborhood in 1990.” Galasso believes the new apartment development is more of an asset to the community.

Amie Hayes, a historic resources specialist with Save our Heritage Organisation, said that even though the house was designated historic in 1990, the city (via the historic resources board) ultimately allowed it to be demolished because of various unpermitted alterations to the exterior.

Hayes said they were able to salvage a few interior elements of the house before it was demolished (banister, front door, and entry paneling).

The house was historically designated based on its historic association with Oscar Millard (well-known property owner and developer) and architect John Stannard (master architect and designer of many downtown buildings, including much of the Gaslamp Quarter). The house was part of a row of in-tact Victorian built around the turn of the twentieth century.

The developer claimed during the site development process that rehabilitation or relocation of the old house would cause a financial hardship, making the project economically unfeasible. The developer plans to sell the new five-story house for an estimated $2.6 million and the apartment building, five years after construction, for about $11.5 million.

The plans submitted in 2016 to the city called the project an “expedited very low income housing project.” Even though part of the project is a multi-million dollar home, the promise to build even a few low-income units usually helps get permitting expedited.

For one single-room-occupancy resident, Candice, it doesn’t seem like affordable housing is being built fast enough to keep up with what is being taken away. “I’ve been kicked out of three places in the last five years.” Candice was evicted from the Baltic Inn so it could be turned into a trendy boutique hotel. “Every time I have to look for a new place, it gets harder. I was homeless for two months the last time. Why do they think it’s okey-dokey to do that? I have so little.”

Candice didn’t want to divulge her last name or the place she is currently living. She said her current situation is only a little better than being on the street. “All the people you don’t want to run into on the street I see in my hallway. No one cleans, and the bathroom I share is gross most of the time.” She said she keeps her head down, saying if she complains, “I’d get kicked out for being a troublemaker.”

A perusal of the housing commission’s list of single room occupancy buildings reveals why Candice is finding it harder to find a new place to lay her head. The number of such hotels has shrunk even as the number of homeless people has swelled. The state’s elimination of redevelopment districts in 2011 is hard to ignore as a factor, because such districts were required to spend 20-percent of their revenues on low-income housing.

In 2012, there were 123 local single room occupancy hotels listed. In October 2018, there were only 37, and of those one is hitting the AirBnb market while another is now renting upscale office space. One is going the residence inn route with monthly rents closer to $1400 while another has turned into a more pricey boutique hotel. One is on the market for $7.5 million and a couple others were redone to house only seniors.

More than 20 percent of currently listed single room occupancy hotels are exempt from being replaced if they are converted or developed into something else.

Of the 80-plus single room occupancy buildings that have dropped off the list since 2012, many were redeveloped for boutique and market rate hotels (15), market rate or luxury condos/apartments (12), vacation rentals (4), commercial office space (3), parking lots for other boutique hotels (2), and a residential inn catering to students and contractors (1). A few became apartments, one became a luxury home, and one historic structure was demolished for a federal courthouse expansion.

The majority of single room occupancy places (78) listed were built before the 1930s. Many date to the 1915 Panama-California exposition — accommodations for workers and visitors.

Fifteen were built in the 1800s, including a saloon that served as San Diego’s first zoo. The saloon owner had animals out front to tempt customers into his establishment. That is until a bear got loose and bit someone. During prohibition, the saloon became an Asian import business that rented rooms to Japanese business people. A bank seized the property (on Island Avenue between Fourth and Fifth) during WWII when Japanese people were being rounded-up. The bank then opened up Hotel Callan, the same hotel that is currently a downtown single room occupancy hotel.

One hotel on the current list is a beachfront hostel in Pacific Beach that doesn’t allow locals. An employee at the hostel said, “It’s state law.”

She said that homeless people with identification from outside of San Diego can stay for up to 14 days. After looking at every state law that mentioned hostels, I couldn’t find any law that said “no locals allowed.” An employee at a hostel in Little Italy told me there was a law but didn’t know what it was. An employee of The Lucky D Hostel in the Gaslamp District said he doesn’t know of any law, “but the owner doesn’t want to rent to locals, because every time we do they trash the place.”

If a micro-apartment can get $2000 today, what might that do to the rents of studios or one-bedroom apartments in the future. A decade ago, one could find a nice 2000-square-foot house in Clairemont for $2000.

Scott Marshall from the San Diego Housing Commission said they have “not seen a rise in micro-unit affordable rental housing developments.” That could change soon. The planning department is looking into expanding single room occupancy/micro-unit zoning. Something will likely be in front of the city council in early 2019.

Signage at the Little Italy project site states the project dubbed “The Continental” should be ready for residents to move in by spring 2019. Though, with an estimated construction time of 12 months and the building permit issued in August, it could be closer to summer.

Thank you for letting us know when the other shoe would drop on this.

As I pointed out when this project was first proposed, developers need to stop pretending that eliminating parking and allowing cell-block-sized units will increase affordability. Instead of passing on the savings in construction costs and lower impact fees, they're using the housing crisis to extract ever more money and force us all in a race to the bottom.

Again, we cannot trust the market to fix a problem that its manipulators created and continue to benefit from. We need to quit buying into the lie that we have to sacrifice quality of life for housing at any price and start demanding that projects requesting exemptions have 30% and more affordable units rather than a token one or two.

The only reason developers say this and other community benefit requirements won't "pencil out" for them is because they're used to triple-digit profit margins. Don't believe it.