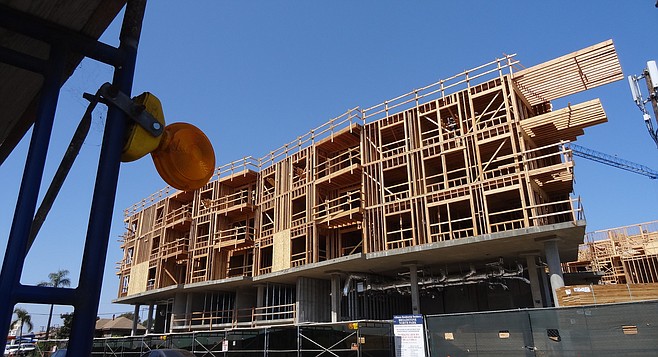 How high will the rents be?

Broadstone North Park, a project of Alliance Residential Company, continues its rapid construction progress at the northeast corner of Texas Street and Howard Avenue, extending to Arizona Street. Its actual address is 4220 Arizona Street, the same as the demolished eyesore-structure that was there. Upon completion it will be a market-rate, multi-family housing complex. 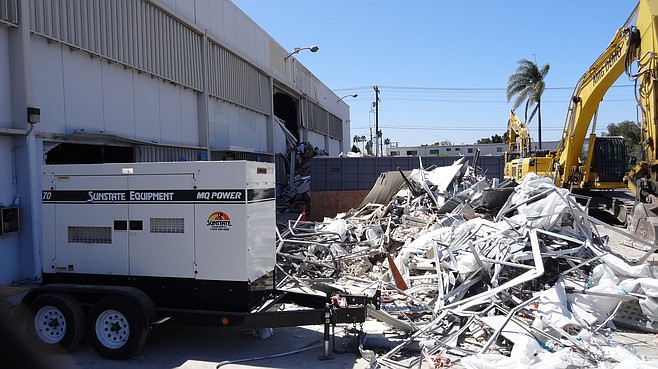 The property was originally owned by Community HousingWorks which is also developing the North Park Senior Apartments across Texas Street on the northwest corner. The two projects were approved by the San Diego City Council on 1/26/2015. Community HousingWorks had planned to develop the market-rate apartments, where a former, vandalized AT&T building was located.

Community HousingWorks originally paid $5.15 million for both lots. These developers ended up selling the larger lot to WCOT/Broadstone North Park, LLC for $7,113,333, earning a nice profit.

Infill development has come to North Park rapidly, but it seems to be a mixed bag. It often gets rid of blighted properties, while bringing in new residential units. But leasing rates are climbing.

Jeff Graham, former president of Civic San Diego, and currently executive director of real estate at UCSD, offered some insight. “I don’t believe that a few new ‘higher price point’ residential projects in North Park is necessarily bad for the community,” said Graham. “The majority of housing stock in North Park is older in nature, and some (certainly not all) is relatively affordable compared to other urban neighborhoods of San Diego.”

Graham brought up another factor on reducing the cost of new apartments: parking. “Most San Diego workers still need cars for their commutes,” Graham said. “Until that situation changes, developers will construct at lease one parking stall per unit (or even per bedroom) in order to rent or sell the units. A below-grade parking stall can add more than $200 per month to the rent of an apartment. Perhaps this challenge will change as more people purge their cars for Uber/Lyft, mopeds, and future autonomous transport vehicles.”

Steve Aldana, community development coordinator at the El Cajon Boulevard Business Improvement Association, said: “The El Cajon Boulevard BIA supports this type of infill housing in the district. It means more customers for our businesses and increased vitality in the area. As these new residents move into the area, we will step up efforts with Mayor Faulconer, Councilmember Ward, and Vision Zero to improve pedestrian safety along the corridor."

I was unable to obtain likely rent rates from Alliance Residential, but the company’s Broadstone Balboa Park at 3288 Fifth Avenue has studios available from $2,175 to $2,743. Broadstone Little Italy at 1980 Kettner Boulevard has studios starting at $2,666. A one-bedroom starts at $3,372, and two bedrooms are $4,295 and up. But these are not necessarily comparable to North Park rates.

Unbelievable. How or why could Community Housing Works be allowed to renege on their plans, especially when they violate the conditions set by city council? I'm fairly certain CHW received special terms to acquire and develop these parcels, if not also federal grants or other matching or charitable funding. Now a key 1.21 acre location at the intersection of two transit corridors is going to be co-opted as a luxury development for those who won't ever use public transportation.

CHW isn't supposed to flip properties to turn a profit. Their mission is to build and own "attractive, safe, and sustainable apartment communities in California that...give people living on a limited income the chance to find home stability, pay an affordable rent, [and] be part of a strong community." Even assuming they use the proceeds to develop a rental property elsewhere, it won't benefit from a better location or 2013 property prices—and, unlike this site, may require the destruction of existing housing.

Hard to see this as anything other than a complete betrayal of their purpose.

It is my understanding the larger parcel was always going to have market-rate apartments. I don't know why CHW decided to sell the lot, but I'm assuming it was legal to do so. I didn't contact them for this article, as they have nothing to do with this apartment project.

The older housing stock will jump signifagently based on the possible "market rate" of the new structures. Neighborhoods due evolve, especially desirable ones like NP. Higher rents will ripple out to City Heights and beyond. Time to move to East Co. and beyond as wages are stagnant.

I believe you once commented here that Logan Heights could be the next area for gentrification. But is it too late for that already? Maybe the flippers have already jumped in there. As for East County, you have longer commutes, no "trendy" hoods, boring suburbia and hotter summers.

I used to live in Mission Hills off of Eagle. You are correct that high rise development will push property and rental costs higher and radiate to nearby neighborhoods.

Hillcrest used to be called the "Gay 90's." Either you were gay, or you were in your 90's. Hillcrest is a premier example of gentrification in San Diego. So is North Park. As older people move on, the young move in and improve the properties. But there is a big difference between "East County" and what NP and Hillcrest offered... these long-established communities offered long-established neighborhoods and craftsman homes and proximity to the city core. East County doesn't offer that, they are suburbs and will never have that downtown/local/walkable feel that Hillcrest, NP and even City Heights have.

I know nothing about City Heights housing prices, but you can't buy an old bungalow in NP for less than $500K. A large house there will run you $650K and up!

Logan Heights may gentrify, after the battles against gentrification of Barrio Logan are lost. But look to gentrification in Logan Heights and it's neighbors to commence somewhere in the decades between 2040 and 2060. In the meantime, nothing is going to change much. You can't predict "gentrification" when those communities continue to export/expand their business killing, food desertification, decay,crime and urban blight into the once (somewhat) stable and thriving communities of Lemon Grove, Spring Valley and Casa de Oro.

The place where you still get nice condos and houses at way lower cost than in San Diego is Cathedral City (right next to Palm Springs).

East Co. just needs a few artists to settle in places like downtown El Cajon. The gyms will follow and it all starts again.

I did see the old police station site in El Cajon will have a new Hampton Inn, a large In-n-Out Burger and some retail. http://www.sandiegouniontribune.com/communities/east-county/sd-se-elcajon-hilton-20170710-story.html

El Cajon? That community is just going to devolve into mostly refugee/immigrant shit holes like the ones in Detroit. There is no hope for El Cajon now. There is a very thin demographic that will consider moving there.

Rather than El Cajon, I see Golden Hill as possibly the next "cool" place to live or work. And, of course, the Reader offices are there on Broadway.

I think Golden Hill is already cool. To me its been cool since I found the Big Kitchen in the 80's. My friend owned a laundromat which is now a dog wash. Walkable, easy level streets for biking, and the proximity of Hillcrest and other cool destinations.

The Big Kitchen is in South Park, not Golden Hill.

Walmart pays $11. Full time (173 hours/month) equals $1,903 a month before taxes. A studio apartment starts around $950. That leaves $953 a month to pay for utilities, transportation, clothes, food, and health care and taxes. where will these people live? They can't all live at home and it is hard to work and live on the streets. For those working in the retail, restaurant, hotel, leisure industry there is not affordable housing. Ghettos are created by increasing the number of people living in a housing unit to more than the unit was designed for. (ie 4 people in a one bedroom unit.

A landlord I know told me his biggest problem with their apartments (in NP) is that people move into the building, then later bring in more people, which is a lease violation for starters. Plus noise, a jump in water usage, more wear and tear, etc. One senior in a one-bedroom later moved in her four young grandchildren, and then her son moved in, too! Of course, there was an eviction.

A friend has been buying 6 & 8 unit buildings in the NP and surrounding areas for three decades. She stopped entering into leases and only rents "month-to-month" to make the eviction process smoother.

A lot of landlords should consider this strategy because of the tight market. Month-to-month is treated differently than a long-term lease. She agrees not to raise the rent unless something, in the month-to-month agreement, triggers a rent increase or termination.

Broadstone North Park is still not full. They have there "for rent" sign out all the time, and sometimes have a sign waver at the corner.