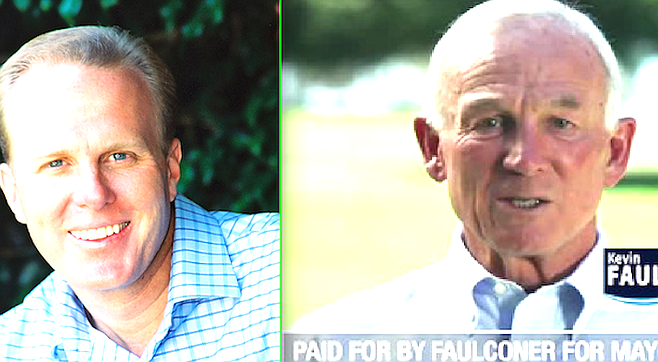 What is Faulconer doing?

I love San Diego. Your perfect weather, friendly people and exceptional natural amenities are forcing me to consider keeping a vacation home in SD County. Nevertheless, Mr. Faulconer’s feckless policing policies should prevent any vulnerable people, such as children or the disabled, from frequenting the city center (“Avarice and denial shadowed mayor’s ballot bid,” News Ticker, August 10). For the past several years I’ve lived in Washington, DC. I am a native New Yorker, attended college in the South, and regularly visit foreign capitals such as London and Rome. I’ve never felt in physical danger anywhere until all three of my last three days in San Diego.

Day 1 (Oct. 19), I had to try the famous Bronx Pizza. It was off to a terrific start with a warm welcome, packed restaurant full of real New Yorkers, as well as folks seemingly representing all six populated continents. I cannot rate Bronx Pizza highly enough. Best NY-style pizzeria west of the Tri-state area. Unfortunately, Mr. Faulconer’s failings soured the mood. If you haven’t been to Bronx Pizza, in addition to the restaurant, it has a sidewalk pickup window. A Caucasian fellow on the street proceeded to scream at the Black patrons, “I hate all f–ing n–ers! I’m going to kill all of you! Right now I’m going to kill all you f–ing n–ers!” repeatedly. In Faulconer’s San Diego, these families had to endure this abuse, and these threats of violence for upwards of 15 minutes before police arrived.

Day 2 (Oct. 20), at the amazing Balboa Park packed with people, El Prado is merely one lane each way between the Research Library and Mingei Museum. A large man stood in the middle of the road stopping traffic. Many cars were stuck, again for upwards of 15 minutes, while this man screamed at the drivers and pedestrians. When an older gentleman bravely asked this man to leave these people alone. The large man stooped down, and nose-to-nose screamed at the older gentleman unrelentingly. The crowd encouraged the older gentleman to just wait for the police. This time, no police showed up at all. We were all at a lone madman’s mercy if we wanted to continue enjoying this Saturday evening at Balboa Park. This man eventually tired of stopping traffic, but even when we departed for dinner some time later, he was still screaming at groups of families in Faulconer’s San Diego.

Day 3 (Oct 21), I was strolling away from the Hornblower ship with my wife after a pleasant bay cruise, and a homeless fellow ran up to us. He hurled abuse and threatened me out of the blue at around 11:30 am in Waterfront Park. As a city-dweller, I’ve encountered all sorts of people from every imaginable background. Nevertheless, I’ve always felt safe, be it walking around the actual Bronx, the rougher areas of DC, downtown Atlanta, or the grittier parts of East London. We’re average-sized people, but I did fight competitively as a teenager. Most of my feeling of security is knowing that even the most negligent of the Western world’s metropolitan mayors are able to keep their cities relatively safe in highly trafficked areas at broad daylight. All three of the three times I’ve felt unsafe in the totality of my life have been in Faulconer’s San Diego. I do not know Mr. Faulconer, and have no political ties to anyone in San Diego. Nevertheless, I can confidently say the obscenely delayed police response in downtown, and the entirely absent police response in Balboa Park, during hysteric threats of violence against large crowds of people, portrays a mayor cashing his paycheck and leaving his job undone.

I agree 100% with the author. To add: the trolley is nothing more than mobile insane asylum while the many "beautiful" beaches are collection areas for the homeless and mentally ill-and, yes they randomly yell at people making a very unsafe environment. The only time the city does anything about the homeless and criminal is when there's an emergency such as the Hep A outbreak-then they gathered the homeless under big tents to hide the problem. When you call the police for help regarding anything you receive a recording that tells you they are "understaffed." Yeah, great way to make the public feel safe and send a political message about the budget. If they're so understaffed why do you see them hanging out in pairs by the Liberty Station channel and on Liberty Station doing nothing-not to mention hiding in various spots throughout S.D. But when a coffee or doughnut shop is willing to give them free coffee, they're there in a heartbeat instead of being proactive to the public's concerns. Great leadership mayor!

That's a cliché to say that, as I've never gone into any donut/coffee shop in San Diego where I saw a police officer.

You would know, what with you being the king of predictability and unoriginal thought.