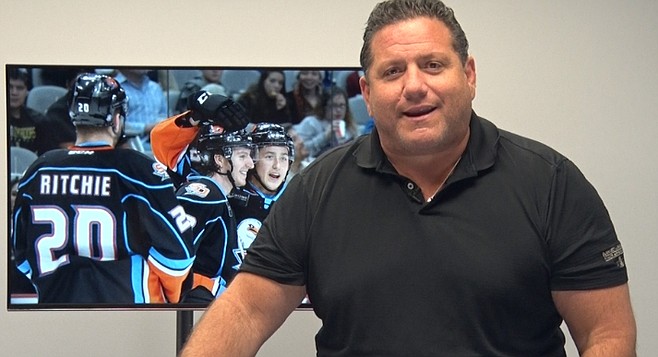 The fight from the bottom

That could be the college dean in Animal House telling John Belushi’s character his grade point average.

Or it could represent the status of the all-sports radio 97-3 The Fan, as it struggles to come back from the dead-on-arrival launch of The Machine in March.

The Machine — a mix of sports talk, hard rock classics, comedy bits and live Padres — crashed and burned after only one month following the uproar over new morning man Kevin Klein who announced his arrival to the airwaves with a Twitter post that had fun with Coronado bridge suicides.

Klein never made it on air in San Diego. The entire Machine format was scrubbed and replaced with the more traditional all-sports station called 97-3 The Fan.

Entercom Communications owns 97.3 FM which had the call letters KSON for decades but now uses KWFN-FM. Faced with the collapse of The Machine, Entercom brought the station back as 97-3 The Fan with sports talk and live Padres.

97-3 The Fan has two months under its belt as an all-sports station. And its ratings, like the Padres, are in the cellar.

Dan Sileo, the former Tampa Bay Buccaneer defensive tackle who cultivates a macho, East Coast goombah on-air swagger, was tapped to do morning drive at 97.3 replacing Klein when The Fan launched in April.

The bottom line for sports stations is getting men, aged 25-54, to listen. In the latest Nielsen ratings for May, Sileo’s morning show has a 0.0 rating in that target audience. While the other two all-sports morning shows, on Mighty 1090 and XTRA Sports 1360, are not ratings blockbusters, they do better than Sileo.

This is remarkable considering the other two stations are on the AM band, and because conventional radio wisdom says that stations who carry major league play-by-play are thought to get a ratings bump the next morning.

“This means that people who are Padres fans have to get up in the morning and change the station because they don’t like what they are hearing,” says one radio veteran who works for a competing radio group.

The Nielsen ratings people estimates there are 719,400 men aged 25-54 in the San Diego market. Their May survey says that at any given time during the morning hours, The Fan has an average listenership of 200 men 25-54, which they say averages down to 0.0. In contrast, the English-speaking station with the largest audience in that demographic is KFMB-FM’s Dave Shelley and Chainsaw ensemble who show an average listenership of 6,100 among men 25-54.

Radio insiders doubt Entercom would make any major changes with 97-3 The Fan until after the Padres season is over. But many are wondering what Entercom has in store for its San Diego FM station. The Fan loses to its other two all-sports competitors each part of the day except at night. But even at night The Fan is in 24th place among men 25-54, suggesting live Padres radio simply may not matter much to San Diego as it did in the 70s, 80s and 90s.

The Fox Sports TV San Diego channel arrived five years ago with the primary intent of making sure all Padres games would be televised. Now that all Padres games are on TV, radio play-by-play does not enjoy its exclusivity.

Adam Klug, program director of 97-3 The Fan did not return a request for comment. Jennifer Morales, director, corporate communications & public relations for Entercom Communications and its 235 radio station group responded by email: “Unfortunately, we are going to pass on this opportunity,” regarding questions for this article.

Radio insiders say something must eventually happen with 97-3 The Fan.

It is known that the contract that binds the Dave Shelly and Chainsaw show to KFMB-FM is up for renewal this summer. DSC leader Dave Rickards admitted in an email that he had visited the newly built Entercom studio complex on Granite Ridge Road in Serra Mesa a few months ago.

“I have lots of friends who work there and when David [Field, Entercom president and CEO] was in town, he invited me in to see the place and get to know each other,” Rickards told me.

While Rickards did say, “I know of only one show that can rescue that radio station,” he remained non-committal about any DSC lateral move. “I have nothing to confirm or deny about my show.”

But based on some market realities, the segue of DSC to Entercom may seem questionable. While Entercom may appear to be desperate to get 97.3 FM on the right track, the annual cost of the seven-member DSC morning crew is estimated to be in the $2-million range. When Entercom swallowed up the CBS properties last year, Field promised that $110-million in nationwide cuts could be made due to “synergy.” So far only about half of that amount has been made in Entercom cuts. Entercom stock is down about 50 percent since the merger. Making a huge financial commitment like hiring Dave Shelly and Chainsaw may be thwarted by Entercom’s financial plight.

Meanwhile one Entercom executive confided that Klein will be resurfacing at an Entercom station in Los Angeles. Attempts to reach Klein were not successful.

With the moving of the Chargers to Carson, you would have thought it would have been tough for even 2 sports stations in San Diego. So of course, the Padres move to 97.3, and a THIRD sports station appears.

And the 0.0 rating for Sileo? That sounds about right.

Who cares? Sounds like Entercom Communications made some stupid decisions and now are reaping what they sow. Two sports stations is one two many but I hope they both make it as it would be sad to see people lose their jobs. Maybe Entercom would have better luck bringing back KSON.

The Padres also made a bad decision, as a good portion of the county can't even pick up 97.3 to listen to the games. Ironically, the guy who set up the Padres radio station switch is Mike Dee, who was fired by the Padres after that, but was then hired by Entercom.