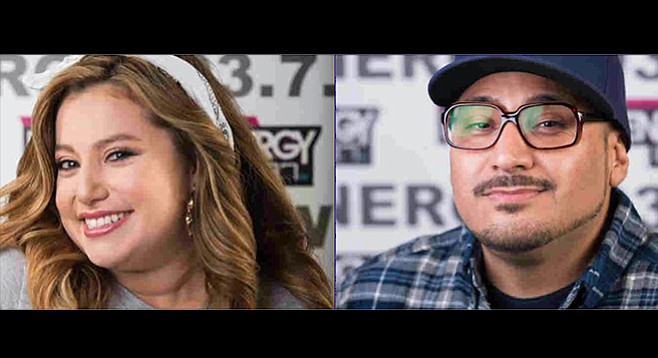 The Machine spits out 97-3 DJs

Music programming out, talk-radio featuring The Men's Room in

On March 1st, San Diego’s all-music station known for three years as “Energy 97-3” was “blown up,” as they say in the radio business. The upshot: there is one less local station playing the hits by DJ Khalid and Selena Gomez.

Beto Perez and Tonya Gonzalez, both born and raised locally, lost their DJ gigs on Energy and were replaced by a Seattle-based talk show called The Men’s Room. Energy is now called “97.3 the Machine,” specializing in lifestyle-based talk aimed at male listeners.

Some insiders point to a couple reasons why “The Machine” may be a bad idea. For starters, talk radio on FM has failed twice before locally: once when news-talk KOGO was simulcast on 95.7 FM and again when “Free FM” was carried on 103.7 FM. Also, while the afternoon Men’s Room show does well in Seattle, covering subjects such as women, sports, beer, and cars, it may not translate well to a San Diego audience.

Other industry long-timers, however, say that 97.3 the Machine may make sense in the long term once the Dave, Shelly, and Chainsaw (DSC) ensemble leaves KFMB-FM and joins the Machine, as is rumored.

When asked if DSC is in fact planning to jump ship in September when its current contract expires, DSC ringleader Dave Rickards replied “...it’s not September. Much sooner than that.” While he did not directly divulge if DSC is in fact leaving KFMB-FM for the Machine, he pointed to recent ratings that indicate their show is number one among all listeners 25–54 and even stronger among men in that age group. (The 25–54 age range is considered the most desireable to advertisers.)

Since broadcasting conglomerate Tegna (formerly Gannett) took over the KFMB radio and TV stations last month, Rickards has regularly carried on (in a Frankenstein voice) about how Tegna won’t tolerate certain parts of the DSC show.

The Machine will also carry Padres games. Last season the games were carried on modern rocker FM-94/9 (now called Alt 94/9), which took a dip in its ratings once it started mixing live baseball and modern rock.

Both Alt 9/49 and 97.3 the Machine are owned by Entercom. Attempts to get comments from Entercom general manager Bob Bolinger were not successful.

This is a genius, locally produced podcast that brilliantly lampoons the Machine. 97-3 The Machine will never ever matter is because it will rely on a lazy pantload caricature like Dan Sileo as their only local host but will never bother with a true radio talent like this guy.

There truly is some value with a station that is breaking the radio mold as 97-3 is doing. When they say there is no one else in the country doing a station like 973 The Machine, they are correct. But if you only rely on out of town talk shows like the Mens Room, Ozzy oldies, a small library of comedy bits and Sileo who was in 20th place among men 25-54 when he was at 1090 in the mornings, this effort is stillborn, right out of the shoot.

iHeart is about to go bankrupt. Let's see what happens when real radio people can regain control of the local airwaves. San Diego isn't sleepy anymore. Yet Dan Sileo is the laziest, sleepiest, cheapest hack you could ask for to launch your new broadcast beachhead in America's Finest City.