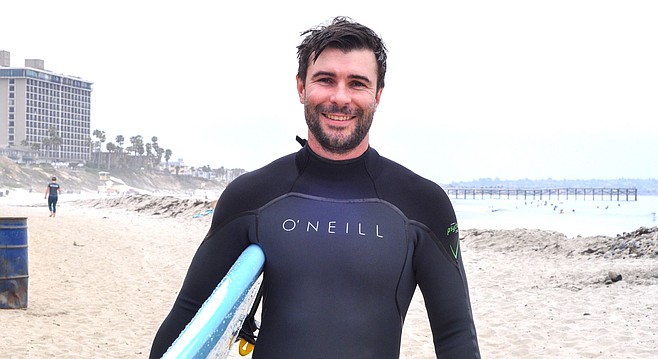 I haven’t been yelled at too much

Your feet get cut up a ton

Matt Nolan has been surfing for three years. His main beaches are Tourmaline and La Jolla Shores, places that are good for beginner surfers.

“First time I started surfing a friend gave me the equipment and took me out there and didn’t give me any instructions. I watched a lot of YouTube videos. I haven’t been yelled at too much, but it probably took about six months of near drowning.”

“If I were to tell anyone who’s starting,” Nolan adds, “I would probably suggest take a lesson. It would have saved me a lot of time and energy. Start on the right board and go with friends.”

Nolan’s injures have been minor but many. “Your feet get cut up a ton when you first start, by the fins and the rocks. Everything’s just in the wrong place when you start out.”

The 33-year-old’s coolest surf experience was down at Baja. “You just fly down there in no time. There are no crowds and there’s warmer water, better weather.”

Nolan is originally from Boston, but when he moved to San Diego he knew he had to try his hand at surfing. “It’s part of the lifestyle here. If you live here and don’t try it out, you’re missing out on what makes San Diego so unique.”