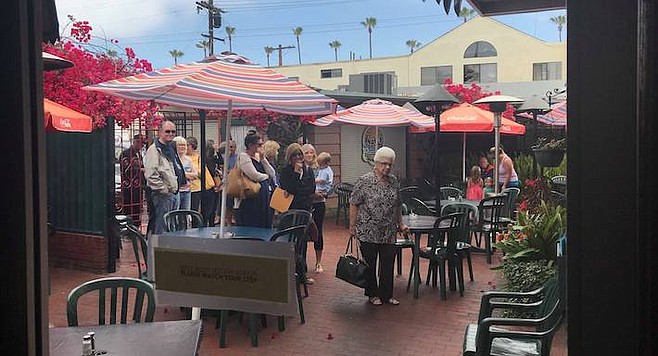 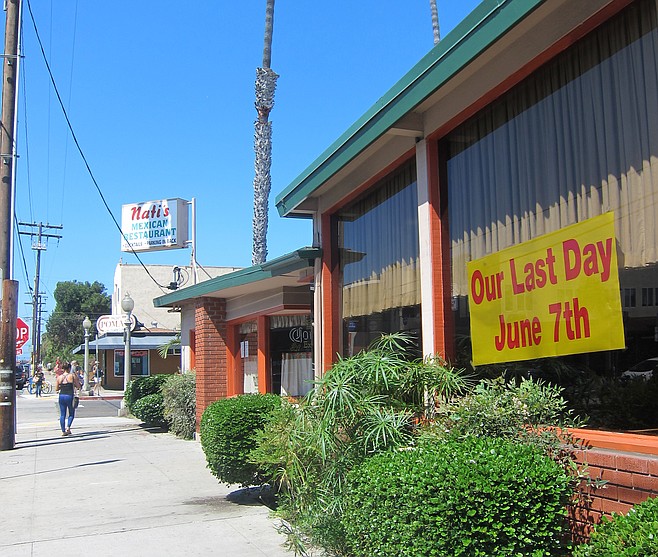 "The vote was 2-7, so it didn’t pass. This means the property can now be demolished."

Amie Hayes, a historic resources specialist with Save Our Heritage Organisation, was there for the city's June 28 hearing. She said no one from the Ocean Beach community showed. There was one email on record calling Nati's a landmark and lamenting anything that might replace it and chip away at the "quirky charm and character" of Ocean Beach. 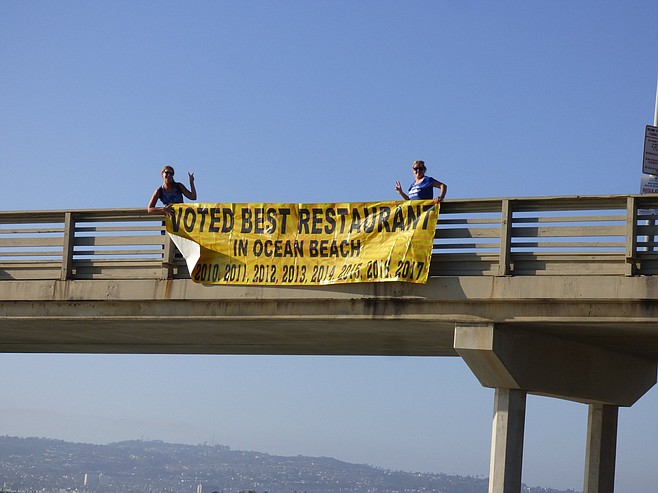 Hayes said that only two historic resources board members supported the designation. "The vote was 2-7, so it didn’t pass. This means the property can now be demolished." She did clarify that nothing was said about demolition at the hearing. The decision cannot be appealed. 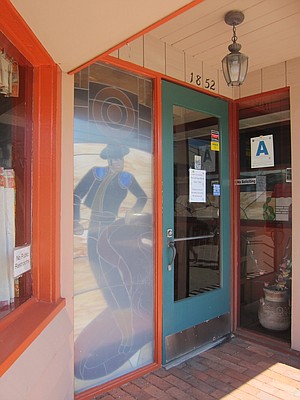 The new owners of Nati's hired consultant argued that Nati's structure wasn't unique in style and no person or event associated with Nati's was considered historically significant. They cited the workmanship as average.

They concluded their case against designation by stating that Nati's doesn't share any common themes with structures in the immediate area, nor does it do anything to improve the area aesthetically or historically. 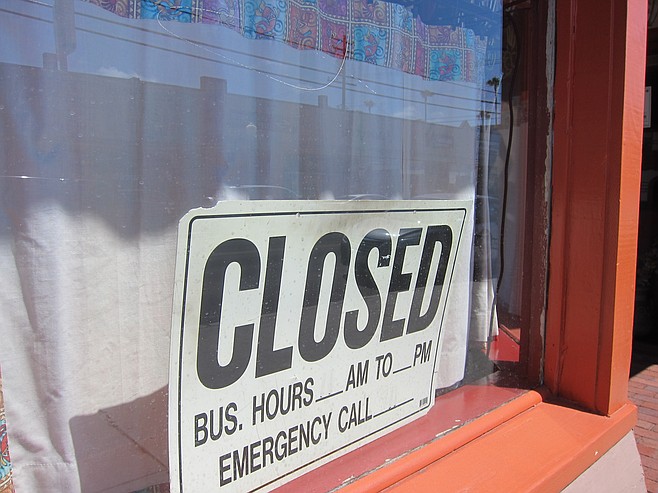 After Nati's closed on June 7, their 12-foot "Voted Best Restaurant in Ocean Beach" banner was donated to the local town council for their annual holiday auction.

Though the banner is sans Nati's name, every local knows it. It's been an open joke on social media for years that Nati's winning the honor every single year since 2009 is tied to their advertising in the Beacon (award giver). 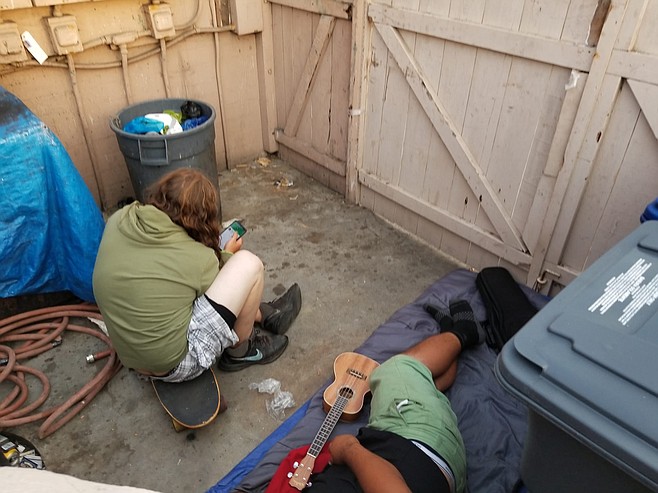 Ryan wasn't aware that Nati's had shut down. She said, "I’ll have someone swing by and surrender the [liquor] license."

The cries of "fake news" have died down as to rumors and red herrings, including the one about a pot pie shop moving into Nati's spot after a quick remodel. When asked, Pop Pie has repeatedly been non-committal about being a future tenant.

Dick worked at Nati's for years. He's using an alias because receiving four weeks of severance required a promise "not [to] talk bad about Nati's."

He expected Nati's to be open until the end of summer, so he was shocked on June 3 when he was told they were closing on June 7. "We were told we would get a two-week notice and when we complained we were told 'well, that’s business.'"

He wishes the employees had been given the same chance that co-owners Marilyn Thomas and Dennis Kerr got to own Nati's after starting there as teenagers. He said some customers would have made an offer if they had known.

Dick said the new owners were at Nati's on their last day. When shown photos, he picked out Elbers and Donovan. "I've heard nothing but bad things about them."

A representative from the city said they have no idea what Donovan's plans might be. A few locals said they could live with some retail and a couple floors of condos above.

Current zoning allows for heavy commercial and residential uses with a maximum density of one dwelling unit for each 1500 square feet of lot area.

If a rezoning attempt is in the cards, a community plan amendment will be needed as well as an expensive environmental review. Public input is mandatory during this process and can take 12 to 18 months. The California Coastal Commission will have to chime in, making it an even longer process. This might be motivation enough for the new owners to put something into Nati's spot so it's not vacant for too long. A local already saw two homeless-looking men lounging in Nati's garbage storage area in the rear parking lot on Friday.

When visiting Nati's before the July 4th holiday, I saw a graveyard of tables and chairs, ceramic senoritas, framed "Best Restaurant" awards, and photos inside. The most significant change is outside with the new pay parking lot. One local said it went up the day after Nati's shuttered.

The surf shop next door on Bacon was vacant. It appears they moved around the corner to a spot on Nati's Niagara parcels shortly before escrow closed in June. The realtor for the deal lists Nati's tenants as month-to-month. County records don't show any other changes of ownership on that block.

I stopped by Donovan's Cass Street (Pacific Beach) office. The suite he lists on most of his limited liability company or LLC forms is actually a mailbox. An employee of the Surf & Post confirmed they have no office space.

Donovan has been using this same Cass Street address since at least 2004. This is where he receives tax bills for several commercial and residential parcels he owns under different LLCs in different neighborhoods (Rancho Santa Fe, Pacific Beach — including a short term vacation rental, Normal Heights, University Heights, Bankers Hill, North Park, and several parcels in South Park). South Park was the uber controversial project on Fir Street reported in a 2014 Reader cover story.

Donovan also has LLC filings with Bennet Greenwald (downtown San Diego, Golden Hills, Carlsbad). Greenwald is the force behind the controversial push to makeover the heart of the Hillcrest business district.

One LLC related to Nati's is SDPB Holdings LLC, formed in Nevada as news was breaking about Nati's being sold in December 2017.

Another is SQFT Investments LLC, Nati's owner of record, formed in 2016 a month before Nati's owners applied for an expansion. This application was withdrawn in July 2017, about the time a deal was struck with Donovan.

Donovan's more recent SQFT Third LLC filing could either point to a project on Third Avenue or perhaps to the three officers (Donovan, Elbers, and Strom) of SQFT Investments LLC.

In December 2017, Donovan added an address on Adams Avenue (University Heights) alongside the Cass Street address on LLC forms. He purchased this property in 2014. Former 1970s city councilmember Fredrick Schnaubelt hung a shingle there (his signage still there when Donovan purchased it). The Adams Avenue business listing still shows Fredrick Schnaubelt & Sons Inc at this address and not Donovan (LLC filings for Schnaubelt show a different location).

The realtor Tony Franco that handled both sides of the Nati's deal posted on Facebook that he was happy to put the deal behind him. He's been given a hard time by locals over this and the deal he did for the old Antique Center, soon to be Target. Some locals call him "Mr. Target." He might prefer to be called "The Man that Changed OB."

Happy. Their food was mediocre at best. Sorry for the folks who were laid off.

A three-story mixed-use building with parking the neighbors will think insufficient is what I see in my crystal ball. Setbacks? Leave it to the city to decide.