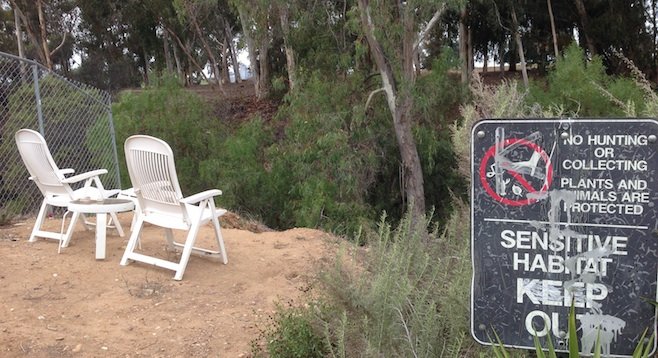 On January 9, the City of San Diego’s Development Services Department issued a notice of site development at the corner of Granada Avenue and Fir Street in South Park. Within days, dozens of nearby residents formed the Protect the 28th Street Canyon Coalition to formally object to the developer's proposals on the basis it would disrupt a sensitive canyon habitat and impede a popular hiking trail.

Though a number of neighbors stand to lose canyon views and access if the project proceeds, they would have little recourse except for one fact: the developer of the property wants to build a significant portion of it on city land. 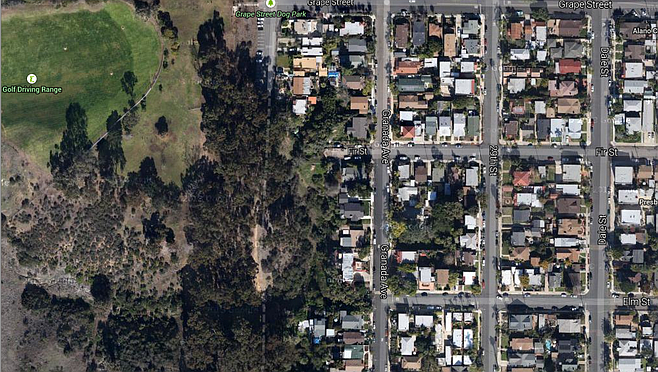 Specifically, the developer has filed an application with the city to vacate the easement currently held where 28th Street would connect between Fir and Elm. By vacating the easement, an additional 14,000 square feet of land — the eastern half of the easement — would revert to private property immediately adjacent; in this case, the 26,000-square-foot parcel held by the developer making the application.

Currently, 28th Street dead-ends at Golf Course Drive to the south, then picks up briefly to provide access to several homes and a parking lot for the dog park at Grape Street, before ending again south of Hawthorne and on through Switzer Canyon. While the city has held this easement since 1886, steep natural canyons running the length of this section have prevented any improvement, leaving it as a "paper street," visible on maps but neither paved nor developed.

The developer's plans would extend current the portion of 28th running south from Grape to provide access to four single-family homes that would be built into the canyon, partially on top of the reverted easement property. Additionally, the developer, identified as SDPB Holdings, has requested the vacation of an easement at the end of Fir Street, which would be used in part to build a fifth home on the eastern edge of the canyon.

Meanwhile, signs erected at the dead end of Fir and Elm streets declare the area to be "Sensitive Habitat." However, the signs do not refer to any local government agency or organization, and local residents have no knowledge who declared the area sensitive or why. Calls to several relevant city departments and nonprofit conservation groups shed no light on how the signs came to be put here, though by all accounts they have been in place for years.

A representative from Development Services noted that, if more than 25 percent of the land in question exists on steep canyon slope, it may qualify under city guidelines as "Environmentally Sensitive." He says while he's already received approximately 40 phone calls objecting to the development, and about as many emails, objections may be premature, as the city has not yet had the opportunity to formally evaluate the proposal.

Nevertheless, the neighborhood opposition is well under way. Eric Bowlby, executive director of the nonprofit San Diego Canyon Lands, has joined forces, saying efforts to preserve the natural space may also have merit based on public use. Specifically, that residents consistently use it as a hiking trail connecting from the 28th Street Park to the trails of Switzer Canyon, which he calls "a really important asset to the citizens of North Park and South Park."

In order for the vacation of easements to be approved, the application must first be evaluated by the Greater Golden Hill Planning Committee, which will hold a public referendum on the matter, tentatively scheduled for March 12 at 6:30 p.m. at the Balboa Park Golf Clubhouse. Their recommendation will then be submitted to Development Services for advisement, but the vacation of easements must ultimately be approved by the city council.

The listed developer contact is an employee of the PQ Design Studio in Miramar, headed by Phil Quatrino. The application to the city was submitted by Michael Donovan on behalf of SDPB Holdings, LLC. Neither wished to comment at this time.

Who is the contact for the Protect the 28th Street Canyon Coalition?

They have created a facebook page to coordinate their activities: https://www.facebook.com/protect28thStreet

Are writing about the parcels fronting 28th Street park between Fir and Elm? http://docs.sandiego.gov/citybulletin_publicnotices/LandUseAndDevelopment/PN1300%2520%2523335589%2520NA%25201-09-14.pdf The notice mentions development of 5 residences.

The previous owner sold the land on 5/2/2013 to Donavan (SDPB Holdings LLC) for an amazingly low price (~$250,000), per current records. Surely this is not the final sale price!

The parcels appear to provide plenty of room for 5 homes, matching the four residences on Granada that will back them, plus another large multi-family unit, on their east side. The new homes have to be accessible by fire and police and owners, so I imagine that there is a request to vacate public land for roadway development at the west end of the dead-end Fir to provide access. Fir Street never was paved to go through to what would have been 28th between Fir and Elm, so I don't think it's too shocking to request the city to provide an easement to create a bit of street that had never been never been built in this one spot. It will be an unpleasant shock to the property owners on Granada, however, as they will now be like other homeowners on Granada, and have rear neighbors on 28th Street, instead of undeveloped space. It's amazing that these 28th Street lots have never been developed.

That's indeed the place. The privately owned property is the 26,000 sq ft parcel I referred to. My best guess is it never got developed for the same reason the city never paved a road through – it's a pretty steep canyon, and most of the parcel in question on a slope. Tough, tho obviously not impossible. I'm sure all aspects will be discussed at the public meetings on the matter.

I think the most curious aspect of this property sale is the seller (longtime SD architect/Park preservationist Henri Jacot) and the sale price, which is currently publicly stated to be $250,000.

Jacot, at age 88 in 2011, was honored by the Committee of 100, an organization of several thousand members dedicated to park preservation. A UT article stated

"The retired architect ... has lived on the east side of the park for more than 50 years. He led the Balboa Park Protective Association when it fought, in vain, against building the modernistic Timken Museum of Art east of the San Diego Museum of Art and the art museum’s west wing."

Blue South Park makes some interesting and relevant comments, but in my mind, makes a case for the letter of the law and ignores the spirit of the law.

Blue South Park focuses on the letter of the law when referring to the century-old parcels. Those same parcels have also been vacant for the century and even before, perhaps even since the beginning of time and all of the geological and biological shifts that have formed its current state. Of course you could say that about many developments that have used natural green areas.

It seems to me to be questionable logic to suggest that just because some houses have been built in the 28th Street Canyon behind Granada Avenue (without paved easement), we should readily accept that more houses should be built. This mindset ignores the canyon for the canyon’s sake. Just because the canyon’s been built in, doesn’t mean that the right thing is to continue to build in it.

I suspect if this were just a flat 26,123 sq. ft lot, you could build much more than five houses and a driveway, but this land is a canyon, not a flat lot. Mr. Westlake, Assistant Deputy Director, Development Services Department wrote, “I anticipate there will be several significant issues with the project due to the topography of the site, potentially sensitive environmental resources and the location adjacent to Balboa Park. The city engineering and transportation staff is reviewing the requested partial right-of-way vacation and determining whether or not that is something the City can support.”

I know that the community of South Park, filled with a diverse group of people, values our environment by taking responsibility to be good stewards, and we will use our considerable voice to protect the 28th Street Canyon in the spirit of the law. We hope that you will come and walk the canyon and enjoy its beauty yourself so that you too can understand what’s at stake.

I don't think BSP's logic is questionable. It is unemotional, however; the fact is, these parcels were platted in the early 1900s, at the same time as all of the parcels adjacent. Just because the owners never built on them doesn't make them "canyon." They are parcels - privately owned lots. That said, it's too bad that you may lose the luxury of having an undeveloped lot behind you. That is a BIG luxury in Sn Diego.

While I know there are people in North & South Park who are knowledgeable about the city's land development code, it might be of interest to readers to take a look at the City regulations regarding "environmentally sensitive lands" and "steep hillsides". The info is found in the Municipal Code, Chapter 14, Article 3, Division 1 (go to City Clerk webpage (search page), check box for Municipal Code then enter keyword "hillside" in the Search box. On the results page, choose the second one down.

It's a long read. I think the bottom line, this development is not going to be easy to pursue.

My hope, the developer decides to cut losses by donating the land and taking a write-off.

There are many more than a few people concerned about this proposed development. 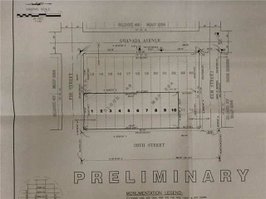 I just noticed this and as usual thought of evil developer and destruction of nature and wildlife preserve. Unfortunately, as much as I would like to keep as many open spaces as possible, the preserve of this space and the associated change.org petition only benefits 4 homeowners and would impede a rightful owner to develop their property. You just can't do this because your view gets ruined. Sorry.