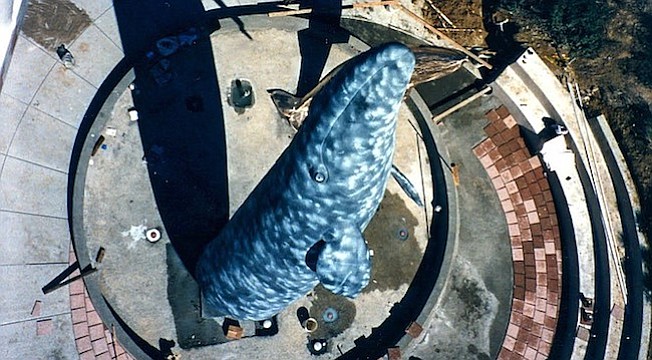 The 39-foot-tall whale statue that greets visitors at Birch Aquarium just got a mini-makeover. Sea air, sun, chlorine, and “especially bird poop” have taken a toll on the bronze Legacy, a life-size breaching gray whale, calf, and tail.

When the statue was installed in 1996, it was the only life-sized statue of a large whale in the world, and the second largest cast bronze sculpture in the United States. At first the artist began to apply life-like paint colors to the surface, but that idea was scrapped.

So artist Randy Puckett and his assistants created a green patina for the statue, accelerating a natural process that would normally take 30 years to change the outer color of the bronze. 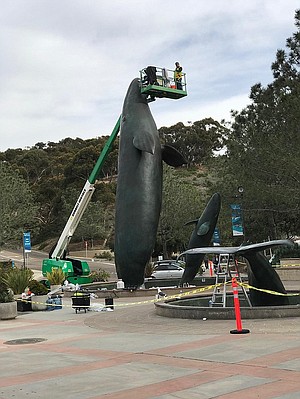 “Bird poop is highly acidic — it can etch into the patina [the outer layer of the metal] and discolor it,” explained Elizabeth Patt of Sculpture Conservation Studio, also responsible for maintaining public art for the Port of San Diego. Mineral deposits from hard water in the fountain cause a white residue over the surface.

“The bright red patches you see on the whale are cuprite, a copper oxide that forms when bronze is exposed to moist air,” Patt said. “It can grow under the patina and make it pop right off.”

To remove the guano and red patches, the crew used several gentle methods. Scrubbing with Ph-balanced, biodegradable soap and distilled water broke up the acid. They used dull wooden sticks — metal tools would scratch the bronze — to flake off the cuprite. Mineral spirits helped dissolve grime and build up. A lift took two crew members to the top.

Elizabeth and the crew used a propane torch to heat the metal before applying the finishing touch: a fresh layer of hard carnauba paste wax, the same used in bowling alleys.