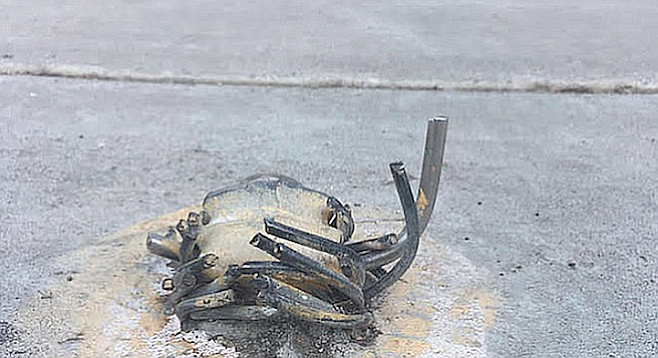 Blame it on a root, charge the taxpayer

San Diego city councilmembers were expected on February 26th to give final approval for a payout over injuries caused by an uneven sidewalk.

The city agreed to pay Lynn Whitehouse $137,500 to settle a complaint she filed after falling on a raised portion of sidewalk in North Park in January 2016. The sidewalk located near 30th Street and University Avenue, according to a city staff report, was damaged as a result of "poor soil" and a tree root.

The newly announced settlement is the latest in a long string of payouts over San Diego's crumbling sidewalks.

As reported by the Reader, a recent public records request showed that city paid more than $5.3 million to settle lawsuits and other claims brought as a result of damaged sidewalks.

A separate public records request, also reported by the Reader, shows that 14 additional claims were submitted to the city from October 2017 to December 2017.

The most recent settlement for $137,500 includes attorney fees.

So wouldn't it be cheaper to fix the bad sidewalks? There's plenty of money to pay out these legal claims, but not enough money for repairs? That makes NO sense at all. And where was Todd Gloria's leadership on this issue, since North Park was part of his district when he was a council member? I once fell down on a North Park sidewalk, due to a raised portion. Luckily I wasn't hurt. I reported it to the City, but it was never fixed. Nobody cared.

The City has a budget item called public liability fund in its general fund. Damages are paid from it. But you’re right repairing or replacing damaged sidewalks, protecting citizens from injury IS government’s first responsibility.

$137,500 is not much considering the medical treatment. I would have been less if the City had paid the claim. The City always denies the claims filed against it as many of the claims go away because the people filing the claim can not afford an attorney.

All city council members and the mayor should resign, for their lack of proper action on fixing our deteriorating infrastructure (water mains, streets, sidewalks, etc.) plus allowing the homeless problem to become such a health disaster that it required private money from local business people to get huge shelters up and operating. A total fail from "America's Finest City." Shame on all of those politicos, from both parties.

sees they spend a lot of time fixing their bottom line, not ours.