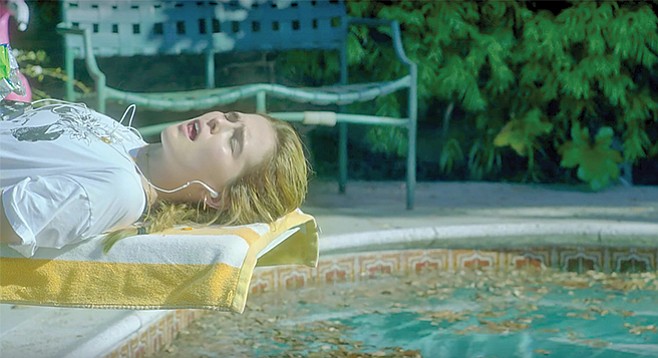 How can you not love a Flower that blooms into such moments of unexpected tolerance as this?

A minor, eager to raise her pappy’s bail money, offers to exchange video evidence — footage of her engaging in sex acts, secretly recorded by two accomplices — for trips to various ATMs with her adult co-star. If the mere thought of this premise acting as a springboard for aweless dark comedy offends, you might find yourself allergic to Max Winkler’s fresh-cut Flower.

The bond between mother Laurie (Kathryn Hahn) and her only child Erica (Zoey Deutch) is such that Mom has nicknamed her daughter “Mom.” The girl, for her part, will do anything for her mother — short of allowing her to happily remarry. Erica doesn’t understand the appeal of Sherm (Tim Heidecker), mom’s choice in replacement fathers, which explains in part her eagerness to spring deadbeat dad from the pen.

Yes, that is Tim Heidecker of Tim and Eric fame, terrific as Sherm, Laurie’s betrothed and Erica’s doofus stepdad-to-be. Like us, he knows that the actor hasn’t been born who can stand up to Kathryn Hahn. (No matter how bad the movie — and she’s appeared in many a stiff — “Hurricane” Hahn is always worth watching.) So he wisely underplays, until finally, one of Erica’s insolent cracks toward Mom causes him to take offense. How can you not love a Flower that blooms into such moments of unexpected tolerance as this?

It’s hard to blame Erica for her attitude. A little (lot?) of mom’s brazenness has rubbed off on her kid, and Sherm’s boy Luke (Joey Morgan) is coming to live in her house. The slovenly lad views life as a prolonged panic attack, and it comes as no surprise that the minute she meets her freshly rehabbed future stepbrother, Erica’s flash-reaction pegs him as “Fat as [email protected]&k, a weird drug addict, and very gay.” In spite of this feeling, or maybe because of it, Erica uses sex not only for purposes of extortion, but as a how-do-you-do. Within hours of meeting Luke, Erica is offering him a BJ.

Do we know Zoey Deutch? She first crossed our radar in Beautiful Creatures, aka the young-adult novel (YAN) franchise that thankfully never was. She quietly stole scenes, playing self-consciously prim Shadia opposite Aubrey Plaza’s brazenly immoral Lenore in the otherwise unwatchable Dirty Grandpa. Cast as Daddy’s little girl, she outshined the pants off both James Franco and Bryan Cranston in Why Him? Add another notch to her acting belt. Whether she’s bouncing on an arcade dance machine or an old man’s lap, Deutch embodies this all-American teen with a comic style and ferocity frequently lacking in today’s movies about kids today.

Queen bitch Erica’s approach to Luke begins to soften, even blossoming into friendship once his sexual abuse at the hands of a teacher is made known. Just don’t expect sentiment or sympathy. Flower is that rare commodity in today’s superhero-driven cinema, and unless I’m forgetting something, one has to go back as far as Igby Goes Down to find an honest, brave, and bracingly comic look at adolescence such as this.

This is the second feature for Max Winkler, and a last name like that means one of two things in showbiz circles: your father’s first name is either Irwin or Henry. Give yourself ten points if you guessed the latter. Winkler’s characters change and adapt, but they never lose their vulgar edge. I had a lot more fun watching this band of miscreants go about their day than I did the overflow of happenstance plastered across Three Billboards.