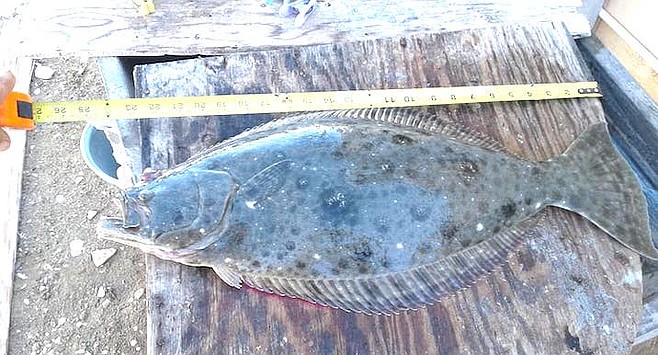 Fish got a Christmas reprieve

Saltwater: No open party boats went out on Christmas Day, so the fish got a break. I’m pretty sure anglers got out there on kayaks, in private boats, and from the piers, jetties and shore. I did. I have been fishing from shore lately, targeting California corbina and halibut. The corbina have been biting sand crabs, while the halibut have been eating a chrome 1.5 ounce Krocodile spoon.

While I have seen some posts on social media of decent surf perch and corbina caught from southern California beaches, there are no surf perch to be found where I have been targeting; Bahia Asunción, Baja California Sur. Here in the 67-degree water on the lee side of the point and Isla Asunción, California corbina and halibut are plentiful. The halibut tend to be about 15 inches long, while the corbina have been on the large side, generally from 17 to 22 inches. My best halibut from the surf so far was a fat 25-inch fish caught on Christmas Eve.

Fishing from the beach has its advantages in Mexico, one of them being there is no license requirement. There is a temporary hold on Mexican fishing licenses for more than one-day panga trips, as the new administration takes over after the presidential election.

The day permits are $11 and the normal annual license is just over $50, so during the changeover of administrations an angler can spend more than the normal annual rate in five days. Annual Mexican licenses are valid for one year from the date of purchase. So, if you bought your annual Mexican license in 2018 after January you’ll probably be fine.

The beach here in Asunción is relatively empty, but the surf angler still need be aware of folks in the water. There are no lifeguards in this small Co-op fishing village, but there certainly are in Southern California, and San Diego lifeguards have the legal power to arrest.

While there may be no law on the books, casting near swimmers is not a good idea and one can be warned and even cited for doing so. Generally, a distance for swimmers of 75 feet as posted on most fishing piers, so apply that to surf fishing when swimmers are near. A former lifeguard chief tells me it is something that rarely gets enforced, as shore anglers tend to target rip currents and bathers are constantly warned away from those danger zones.