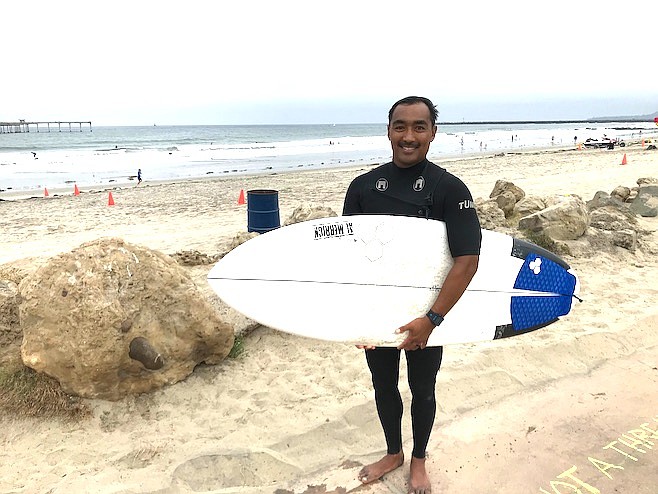 You can’t just catch any wave, there’s a pecking order

Kevin Jimenez was walking on the sidewalk toward Newport Avenue parking lot after a morning surf session. Jimenez usually surfs La Jolla, but today he’s surfing OB “because my son has soccer around the corner.”

Jimenez was taught to surf by his older brother at the age of ten. “I pretty much just followed his footsteps and I’ve been surfing almost everyday since. I keep coming back to surf because it’s free and I can do whatever I want, when I want. I don’t have anyone jerking on me and telling me what to do. I’ve had fun since day one. It’s a learning experience. It’s humbling.”

Jimenez comments on the perils of surfing: “When it’s big, you’ve got people dropping in on each other and it can be dangerous. You can’t just paddle out and catch any wave you want. There’s a pecking order— there’s respect. It’s a whole new ballgame when you get in the water. The most dangerous thing is the lack of communication, not being aware of your surroundings.”

The 36-year-old has been passing his love for surfing on to his son. “I taught my son how to surf when he was about four. I try to start them young, as long as they are enjoying it. Honestly, surfing to me is the world. My family grew up near the beach and I’ve involved everything in my life around the beach… There’s only a certain percentage of the world that can experience this.”