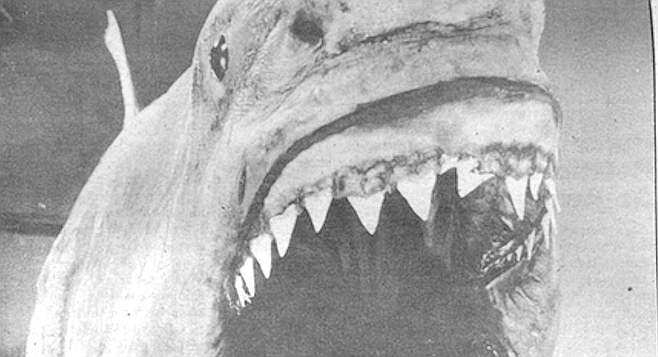 How to catch a shark

If you feel you simply must have a six-foot Blue

From a February 20, 1977 Reader story by David Helvarg

From the 1870s through the Second World War, San Diego had a thriving shark catching industry… [Today] albacore and yellow tail remain the big sport fish, and sharks are considered a “nuisance” catch. Charter boats have no interest in going out after them, according to the Point Loma Sportsfishing Association. If you feel you simply must have a six-foot Blue to hang over your mantle, here’s a list of equipment to take: heavyweight test line, 20 feet of steel leader, blood lure and bait, a grappling iron, a pair of thick work gloves and a twelve-gauge shotgun. It's also a good idea not to try to boat your shark until you’re sure he’s dead. In 1959 a fisherman fired four pistol shots and jabbed a six-foot metal spear into a large White Shark off La Jolla. The shark swam away, apparently unharmed except for the spear sticking out of its head…

Of course anyone can catch sharks from boats, but for true macho craziness no one can beat the Samoans. They cruise out at night in their outrigger canoes and bait the water with blood. When a shark surfaces, some hyped-up young stud jumps it, wraps his legs around it and sinks a knife into its belly. The sport is in getting back in your canoe before the shark’s friends smell the blood and go into a feeding frenzy. Some teenagers in Key West, Florida, got into the “sport” of “shark jumping” a few years ago until local police put a stop to it.

Here in Mission Beach, three swimmers wrestled a seven-foot Blue Shark into shore in August of 1961. After it was beached, a policeman dispatched it with two bullets to its head. Another nice thing about sharks is that they don’t hold grudges.