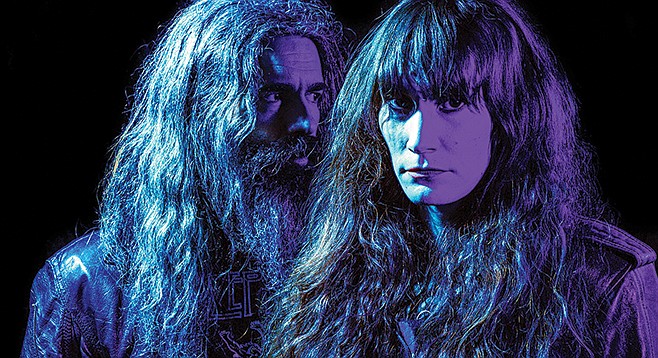 Castle’s video for "Deal Thy Fate," the title tune of their new album, shows them mostly romping under Mojave heat near the band’s pad in Joshua Tree; but it throws in some eerie things materializing out of the (relative) darkness of a full moon.

“Luckily the full moon started in the early evening,” remarked bassist/singer Elizabeth Blackwell, “and since it was still summer we had plenty of light. We had not filmed in the night before but we were able to do it this way since we were doing it from home and not on location.”

Saturated with such lines as “Unleash the fire/Draw the circle grave/Iron in my heart/True as steel…long live the loud,” the lyrics indicate doom metal cred. However, “I wouldn’t call what we are doing strictly doom,” allows Blackwell, “but I was struck by metal and knew that it was something that I wanted to play and listen to for the rest of my life.”

Blackwell’s impassioned singing bears a distinct resemblance to Geddy Lee, and that’s fine by her. “Mat and I are huge Rush fans, so that’s a big compliment. We get that comparison sometimes from people that see us live and it always bowls me over. We have a prog element that is subtle, and I think the way we approach playing live as a three-piece is more raw and stripped down, maybe that harkens back to early Rush.”

Asked about musical influences, Blackwell harkens anew to Rush, for starters. “Geddy is one of my favorite bass players. For vocals, Rob Halford of Judas Priest. As for songwriting, that’s trickier. Obviously, we’re influenced by a lot of classic metal but at this point, on our fifth album with 'Deal Thy Fate,' the songs end up going through the Castle filter. It’s our way of arranging and layering the music that creates this original approach we’ve been honing for almost ten years now.”

The bassist, who hails from the mountains of Northern California, is happy to be visiting the other end of her home state, with minor reservations.

“We’ve played San Diego a bunch,” she says, “and the biggest temptation is eating a California burrito before a gig. It usually ends badly.”