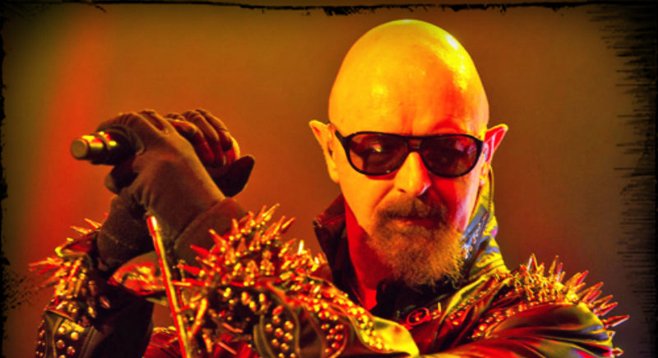 The heavy metal band fronted by Judas Priest singer Rob Halford has recorded in San Diego, though their titular leader is the only part-time San Diegan in the group. Having first lived here in 1999, Halford currently maintains a Hillcrest apartment and cites his regular haunts as Mission Hills, Banker’s Hill, and Golden Hill. “Those are my neighborhoods,” he says. “San Diego’s been a home base for me for quite a few years now.”

Halford has a couple of tattoos obtained locally. His Pain tattoo was done by Gilbert Lynch at Master Tattoo on 5th Avenue (one of the oldest tattoo shops in San Diego), and his arm dragons were done by Dutch at Jade Tattoo in Hillcrest.

In late 2010, Halford and his self-named solo band embarked on a U.S. tour with Ozzy Osbourne, supporting the album Halford IV -- Made Of Metal. It’s a record on which he sounds every bit as powerful at age 59 as he did in 1974, when Judas Priest was a new band.

It takes a lot to sing in front of a heavy metal band, let alone do it for 35 years, and he has no idea what keeps him going. “I’ve been saying recently that if I could put it in a bottle, I’d be doing those 3 a.m. infomercials, selling two bottles for $9.99.”

Judas Priest’s public career began with a bombastic cover of a Fleetwood Mac song. Eventually, most forgot that “The Green Manalishi” had ever been a Mac song in the first place. For the next decade, Priest owned heavy metal with stunning arena shows and a string of radio hits. Halford left in 1992; Judas Priest would not reunite for another dozen years.

Halford’s December 2010 gig at 4th and B was within walking distance of his home. Around the same time, a video for the song “Like There’s No Tomorrow” was released, from his solo band’s album Halford IV - Made Of Metal.

On January 16, 2011, Halford appeared on A&E TV’s Private Sessions, to tell host Lynn Hoffman stories from the road, explain the concept of metal therapy, and to talk about the release of Judas Priest’s British Steel 30th Anniversary package.

As for Judas Priest, although they announced that their 2011 - 2112 Epitaph world tour would be their final tour, guitarist Glenn Tipton said “This is by no means the end of the band. In fact, we are presently writing new material.”

“It is very emotional,” he says in a press statement about guitarist K. K. Downing quitting Judas Priest in early 2011. “You could just as easily [have asked] that same question, which you may have done, when I was away from the band, and Ripper, my good friend Ripper, was holding the mic for me. You just have to carry on.”

After Halford appeared on the 2011 American Idol finale with Judas Priest and contestant James Durbin, he told MTV News “It’s just a dream come true for Priest, for metal and, mostly, for James Durbin.”

A 5.1, multi-camera, HD live-concert film, Halford Live At Saitama Super Arena, debuted worldwide October 10, 2011, with the Blu-ray release featuring a Halford commentary. Around the same time, a lawsuit was filed by his ex-manager seeking $50 million for alleged contract breeches.

Five Finger Death Punch recruited Halford in early 2013 for their single “Lift Me Up,” from the band's then-forthcoming double album. Later that year, it was annouced that Halford would guest star on the Simpsons in January 2014, singing a parody of “Breaking the Law” in an entry called “Steal This Episode,” about illegal movie downloading and also guest-starring Will Arnett, director Judd Apatow, Leslie Mann, Paul Rudd, and Seth Rogen.

In February 2014, he was heard on the Ronnie James Dio tribute album This is Your Life (due in April), performing “The Man on the Silver Mountain” alongside frequent Dio collaborators Vinny Appice, Doug Aldrich, Jeff Pilson, and Scott Warren.

A 2015 anthology the Essential Rob Halford features his work outside Judas Priest, including Fight and Two as well as solo work. The release was followed by a Playlist collection and a definitive Complete Albums Box.

His memoir Confess, co-written with Ian Gittins, co-writer of The Heroin Diaries by Nikki Sixx of Motley Crue, was announced for release in late 2020.

he's cool, i've started listening to this man a few weeks back and i already love most of the songs. my personal favorite is delivering the gods - http://blablamp3.com/mp3/delivering-the-goods.html, it's a bit weird but i have never listened to anything like that before. glad to have come across this post, i didn't know anything about the guy