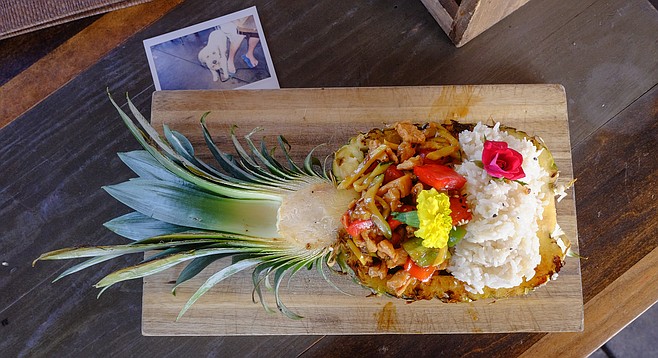 Does a pineapple expression add to the dish?

Ocean Beach — Ten years ago this summer, the stoner comedy Pineapple Express had a surprisingly profitable box office run. I’m guessing everyone who went to see it wound up working in the food and beverage industry, because even a decade later you can’t go two blocks in San Diego without coming across a beer, cocktail, or dessert named after it in some way.

At Voltaire Beach House, I spotted Pineapple Express at the top of the “Bowls” menu, where it stands out for a simple reason: the $15 teriyaki chicken and rice dish is served in a hollowed-out pineapple shell. Make that ginger-coconut rice, with zucchini, mixed bell peppers, and broccoli teriyakied along with the chicken.

It sounded both nourishing and tasty to a guy fresh from a midday run around the dog beach. My faithful fido and I were happy to take a breather at the Ocean Beach patio restaurant and bar, grabbing one of the few low-top tables in a space that’s mostly bar stool height. A server brought us each a drink of water, and dropped off three menus: cocktails, food, and dog bites, featuring dog-friendly preparations of beef, chicken, fish, and vegetables. She took a polaroid snapshot of my still-damp pooch to add to a wall of dog photos at the back of the restaurant. I truly appreciated how welcome the place made my animal feel. My animal mostly appreciated the courtesy scratch behind the ear.

From my looking around, the place has changed a little since opening 18 months back, adding windows to the wrap-around patio that gives the bar and restaurant its beachy vibe. With no rain or fog to worry about this sunny afternoon, the windows were open catch a welcome, cooling breeze.

Just the right vibe for a half-pineapple to show up at my table stuffed with stir fry and rice. I really liked the sticky, flavorful ginger-coconut rice. The chicken was chewy, and the teriyaki a little syrupy, but the veggies proved just toothsome enough to feel as if I was eating something healthy.

The only real problem was that they had to pack the food tightly and pile it high to fit an entrée’s worth of food inside that pineapple shell, making it tough to snag a forkful without dislodging items onto my table or lap. It’s possible I’m a much clumsier eater than most, but for the first few bites at least, each attempt to serve myself resulted in a mini-avalanche of rice, chicken, and bell peppers.

I was starting to think pineapple-as-bowl was all show and no function (perhaps in need of someone’s second favorite civil engineer). But as I ate deeper, my fork began to scrape the fleshy inside of the shell, releasing pineapple juice into the dish and livening it up with exactly the splash of acid needed to balance the teriyaki. A real bowl might have accomplished the same thing by adding a little pineapple to the dish, but if you can get the food to your mouth, this way is more fun.