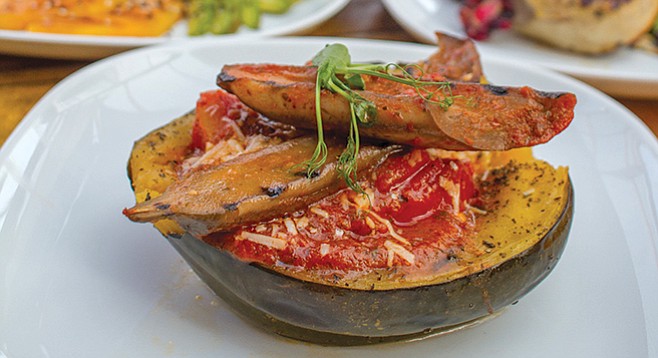 Gather a dozen of your best friends

The first element for a nice evening out is not to rush it. Which makes this place perfect: Yellow Deli never closes, except from Friday 3 pm through Sunday 3 pm, sabbath for Twelve Tribes, the hippy, religious group that built this. The food is simple but oh-so wholesome (a lot from their own organic ranch in Valley Center), from Chicken on the Ranch through the veggie-stuffed Yellow Submarine to veggie burgers or beef and corned beef sammies, and really good home-made soups. But also, come for the beautiful woodwork, the nooks, the multi-level crannies, and the folkie live music that often happens in the evening in the garden.

The evening is the perfect time for this new collective eatery in the walk-only Piazza della Famiglia, from a roast beef joint, to fish, lobster and Asian food stations. But maybe the most original is Not Not Tacos, where — is nothing sacred? — they serve Gringo tacos loaded with fillers such as mashed potato, meat loaf, mac’n cheese, and curried eggs. Also revolutionary: the fact that you can take your beer or wine out with your food to chow and slurp anywhere in the 10,000-square-foot piazza, which means you can relax as evening comes on to the sound not of traffic, but water splashing out of the stunning fountain.

This part of Convoy is alive and crowded at night. You could call it Little Korea. And the eats, Seoul Food. Grandma’s usually has a waiting line like the rest, but that gives you a chance to find out from neighbors what’s good here. If it doesn’t seem cheap, remember that each entrée comes with banchan, side dishes with everything from seaweed to fish cake to savory potato mix. For a BBQ deal, go chicken bulgogi (“fire meat”). If in doubt, ask for the most popular, #47, dolsot bibimbap, veggies, beef, egg over rice, forever hot in a stone pot. And don’t worry about awkward silences. Multi-generational chat just fills the room.

You’d never know Garden Kitchen was steps from the hardscape of City Heights. It’s a little oasis of bamboo, trellises, troppo greenery, parachute shades, and lantern-style lights. Also, they make like everything right here, in the tiny kitchen, and lots of it is vegetarian. Think Japanese eggplant tagine stew, or Freckled Romaine (all sorts of grilled veggies and cheese). But also, say, a wagyu Burgundy steak. Choose carefully. Things can cost. But that’s because the chef-owner, Coral, insists on buying local, and organic, and preparing it all herself. Original happy hour deals, too, like blistered red shishito peppers with porcini balsamic glaze. And at night, no pressure to leave. Chat on.

For this, gather a dozen of your best friends, and prepare to ditch the knife and fork. You’ll be eating with your fingers, because we’re talking party night, Filipino-style. At Villa Manila it's called Kamayan. They spread banana leaves up and down your long table, and bring a procession of rice, stews, grilled pork, shrimp, grilled eggplant, chili and pork in coconut sauce, duck’s eggs, adobo, bangus — milk fish — on and on. Then they spread it all out by hand on the banana leaves. What you discover: getting your fingers messy feels so good. People become a little giddy. Minimum four, but six or more is better. Any night. But Thursday nights, you get around $10 off. Make reservations.

They told Walter, one of the owners at Piazza 1909, that this was a dead spot in La Jolla. He didn’t listen. And his team has turned this 1909 house into one of the coolest — make that warmest — restaurants in town. Lighting around the house’s garden makes patio dining really cozy and intimate at night. The food is mostly La Jolla prices, but for a celebration you’ll get good, sophisticated but honest Milanese cooking. Like lasagna. Or marsala chicken. Salads are a good way to avoid top dollar entrées. Like the house salad or the “Deliziosa” (spinach, pear, goat cheese). Or, just turn up for a dessert and coffee to watch Frenchie bichon bulldogs hauling their owners up the sidewalk.

Sure, drop in for a taco, but really, this is a party place. Come on payday around sunset with a bunch of friends and sit out on the palapa patio, maybe order a bucket of cervezas, some octopus quesadillas, scallops, ceviche, and if a mariachi’s here, go ahead and ask for Cielito Lindo. Or later, come inside where (real) swordfish, and shark, and surfing scenes decorate the walls, and seashells hang from the fishnetty ceiling, get a big molcajete of seafood and sing along with the loud Mexican party music. Cost? Tacos, cheap. Molcajetes, not so. Say, $25. Why “Titanic”? It opened just after they shot the movie near Rosarito.