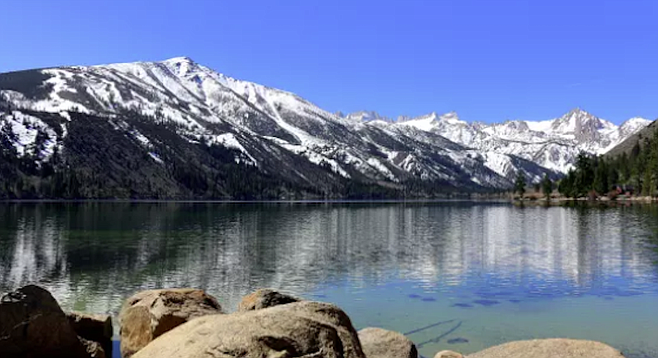 As hundreds of San Diego anglers get geared up for Merry Fish-mas, the April 28 opening of trout season in the Eastern Sierra, reports indicate good fishing is ahead.

Ernie Cowan, of Escondido, the Eastern Sierra correspondent for Western Outdoor News, reported to the 75 members of the Escondido Senior Anglers on April 13, that the Highway 395 corridor received little winter weather this year. That is until March.

“Mammoth Mountain got 400 inches of snow – most received in the last month,” said Cowan. This will unfortunately cause the streams to be “muddy and flowing off the charts.” But the melting snow pack should allow for spring-like conditions throughout the summer.

According to Cowan’s fishing contacts along Highway 395 (south to north), Bishop’s South Lake will be iced over and inaccessible; Sabrina will probably have unsafe ice but have some open areas along the shore; Intake 2 will be open.

Crowley Lake is almost full. “With no ice, fish have been feeding and active all winter. Expect fish to be a little larger at Crowley,” Cowan said.

Convict Lake is open, but all the Mammoth Lakes will be iced over. Cowan expects the road to Lake Mamie, Mary, George, and the Twin Lakes not to be open until Memorial Day.

The four lakes of the June Lake Loop, June, Gull, Silver, and Grant, will all be open and saw little ice over the winter. Silver Lake received 4,000 pounds of stockers last November at the end of the fishing season. “There will be active fish there,” Cowan said.

Further north of Lee Vining, Lundy Lake is open, but Virginia Lakes, at 9,819 feet, will be completely iced over and totally inaccessible.

“The most exciting waters will be up in Bridgeport,” said Cowan. The Bridgeport Reservoir and the Twin Lakes are ice-free. He reminded the anglers that state records for brown trout have come out of the Twin Lakes. Cowan said to except at Twin Lakes, “Double-digit [weighted] fish for the opener.”