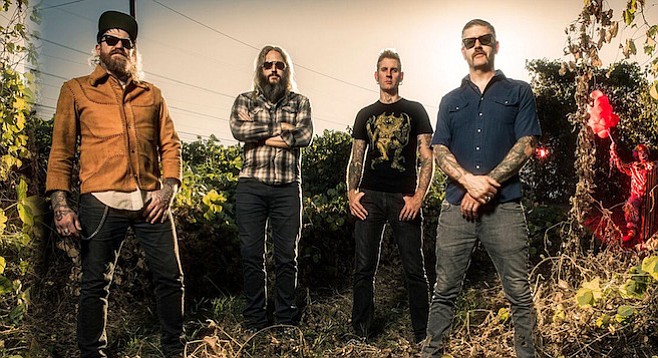 Mastodon helps let out the scream

Count on "survivor bond" after House of Blues show

I used to think the Black Crowes were a loud band until I experienced Mastodon. The back story: I’d been granted a working-category stage pass back when San Diego still hosted Street Scene weekend concerts. I was in the pit, shooting images for some magazine long forgotten. When Mastodon came on, I pitied the fellow photogs who were next to me minus hearing protection. My own hunter’s plugs barely sufficed.

Up on stage, I recall a seasoned-looking bunch of older guys who appeared quite serious about making their music. No smile was cracked. And, they had matching guitars: some kind of somber gray burst pattern, all of them. Serious. Loud as a 747 on takeoff. And, very good.

But then again, you’ve got to be into that fist-pumping head-banging sound of guitars played as loud as is technologically possible with bombshell drumming. It’s like primal scream therapy, but in reverse: we’ve all got a yell locked up inside, and bands like Mastodon help let it out. Not to mention there’s some kind of survivor bond formed in the aftermath of the true earbleed experience. But loud is only part of it.

Mastodon and Eagles of Death Metal

Mastodon is a thinking headbanger’s band. The Grammy-nominated Georgians were secure enough in their musical path to put out a concept album as their number-two release: 2004’s Leviathan (based on the novel Moby Dick), which the rock press loved and decided was Album of the Year.

Sludge metal meets progressive metal meets industrial metal meets groove metal meets alternative metal. It’s all there in a Mastodon show, although Mastodon members told a reporter that they don’t think of themselves as a metal band. Agreed. Genre categorization limits both fans and media to a much smaller universe of possibilities. Not claiming a genre keeps things less one-dimensional. Even good old NPR agreed when they named Mastodon in their 50 most important recordings of the decade. Imagine that.