Despite a silly album cover — skulls and crossbones, text surrounded by flames — Sicarus isn’t as schlocky a metal band as one might think. Contrary to what their art conveys, the three tracks on this disc at first mix bits of trance and pop with the double-bass drums and distorted guitars commonly associated with the metal genre. Then, sadly, it melds into an already well carved niche.

The first track, “Changing Faces,” seems a little overmixed. The drums aren’t as raw as they might be otherwise, vocals slightly too front-and-center. “Breaking Free,” the second song, follows a somewhat more traditional format, with a keening guitar background, fill-heavy drumming, and screamed lyrics. The final offering and the album’s title, “Strength of All,” is harmony-heavy and the band’s strongest track.

While it may be too bubblegum for hard-core metalheads and too...well, metal for the Rise Against and Shinedown set, Strength of All makes for an interesting listen at least. 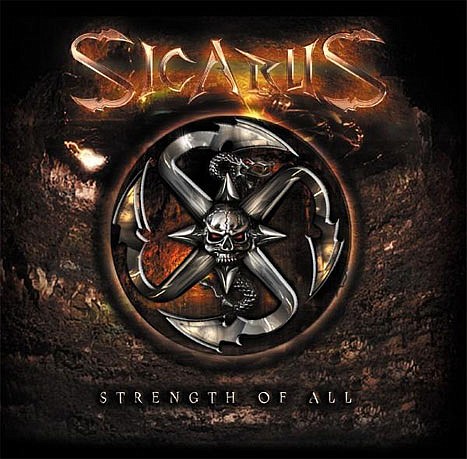 OMG i LOVE the look of this...do they have myspace?

dumb question. of course they do. they sound pretty metal to me and i'm already loving it!!!!!

what is silly about the album cover???? i think it would make a great tattoo.

for the record, as an old metalhead as stated many times through my comments in the reader, i thoroughly LOVE the sound of sicarus...awesome band. added them to myspace and proud of it. give them a spin. you might like it too. u can't always judge a cd by it's cover, although i think that's badass too... much love and respect... M5