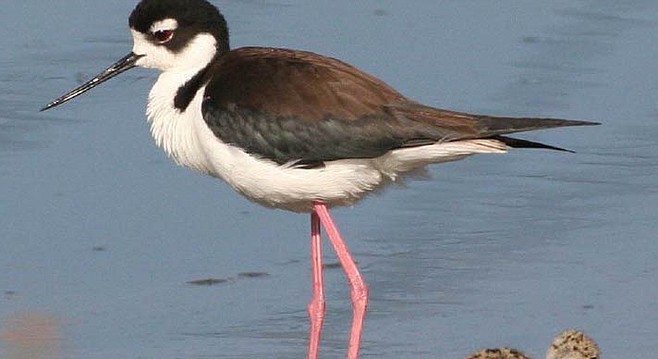 Fed by San Diego River culvert, protected since the 1970s

Though it is estimated that 95 percent of California’s historical wetlands have been lost to development, one slough in that has survived human encroachment, albeit nearly completely surrounded by it, is Famosa Slough. Other than the small channel that runs under I-8 and Point Loma Boulevard to feed the marsh from the San Diego River Channel to the north, the preserve is entirely ringed by buildings and asphalt.

Originally a part of the Mission Bay wetlands, Famosa Slough was gradually isolated by development of the Ocean Beach trolley tracks, landfill for World War II temporary construction, and the channeling of the San Diego River. After nearly two acres were illegally filled in by developers in the 1970s, public sentiment leaned toward protecting the wetland for its environmental importance.

Today, the Slough is managed by the San Diego Park and Recreation Department as a wetland preserve, and with the help of the Friends of Famosa Slough, an enhancement plan was developed. Culverts have been installed to allow the slough to fill and drain; a walking path and benches have been added.

For birders of all levels, Famosa Slough is a place to view the over 180 different species that have been observed there. Most migrating waterfowl, such as brant geese and northern pintails are seen in winter, while others such as the least tern are summer visitors. Year around visitors include egrets, pelicans, shorebirds and gulls. Three raptors have been sighted in the preserve: the American kestrel, osprey and red-tailed hawk. On Saturday, May 20, the friends of Famosa Slough will be hosting a Famosa Slough Nature and Bird Walk from 1:00 p.m. to 3:00 p.m. as a part of the San Diego River Days second weekend of activities.

Other events during San Diego River Days include habitat restoration projects along the watershed, a backpacker’s swap meet, a historic barn open house and hiking and biking outings.