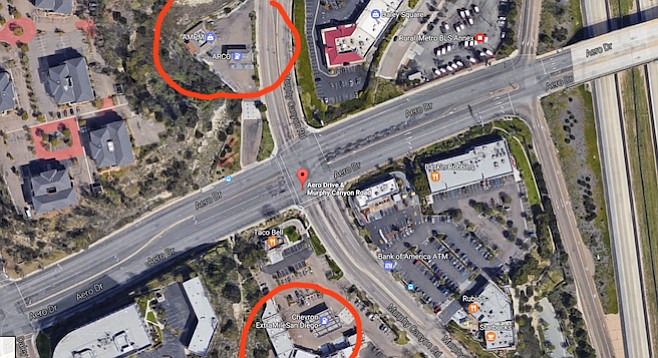 Armed with the signatures of 42 Stonecrest Village residents, neighbors of the Arco gas station at Murphy Canyon and Aero Drive are fighting the business' expansion to add four new pumps and a car wash.

On Wednesday (March 15), the Kearny Mesa Planning Group agreed to hear new information presented as part of an appeal of the planning group's decision to support the project last year.

"We are concerned about the impact of increased traffic on the neighborhood," said Jim Bartell, who represents the 42 Stonecrest residents and a business down the street. "Our traffic study showed significant impacts, contrary to the city's study."

"I can't prove [Bartell is] being funded by the competition, but that's what I think," Mucino said, referring to the Chevron station just south of the intersection. "That Chevron has 16 pumping stations and a car wash and seven businesses on their 1.8-acre lot. We have 5 acres and all we're trying to do is increase our productivity and ability to compete."

Bartell declined to comment on the project's appeal and who he represents.

In January, the Kearny Mesa Planning Group recommended approval of the project, which was headed to the city's planning commission for final approval. The Arco owners want to install an 1800-square-foot canopy, a 968-square-foot car wash, and two new pumping islands that would serve four additional vehicles.

But the appeal forced the hearing off the planning commission agenda, and they sent the project back to the community planning group to review new information on traffic impacts. According to city documents, the city's Development Services Department reviewed the application and looked at a traffic report that concluded the expansion would have little impact on traffic at the corner.

"The city traffic department is standing by their report," Mucino said. "The traffic is already there — most of it is headed to Walmart or Petco or the other big stores in that stretch of Murphy Canyon Road."

But a traffic report prepared for the group challenging the Arco's growth concluded that expanding the gas station would increase traffic by 75 percent at the busiest times. And now the community planning group will look at it and send their thoughts to the planning commission. That means the project is delayed another couple of months, Mucino said.

"We started working on this in 2011 and we've spent somewhere in the $300,000 range to get this far," he said. "Most people don't know it, but you have to maintain a cash balance with the city to go through the process and we've lost track of how many times we've added another $10,000 because something came up that they had to research. There's been architectural review, biological resources review, cultural resources review, noise studies and now traffic studies."

I don't know how adding 4 pumps and a car wash would increase traffic 75% in that area during the busiest times.

I would like to see signs added to the intersections stating "No right turns on red lights" during rush hour times. Having driven through there, it is very frustrating having a green light, but not entering the intersection (because you have nowhere to go, and can be ticketed for blocking traffic if you get stuck while lights change.) Leaving the gap emboldens drivers to make that right turn when the way is clear, again blocking you way. Such activity ends up increasing traffic in the directions that actually have the right of way.

I would really like to see the new traffic report that was done. Would greatly appreciate if someone could direct me to a copy.