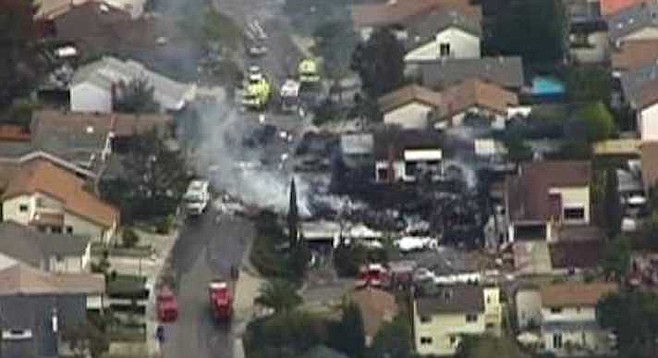 How will University City observers complain?

University City residents continue to express their concerns for the safety of residents at the west end of Miramar Marine Corps Air Station runways, saying that the flight webtracker they used to identify aircraft they believe were off-course has stopped carrying military flight data. 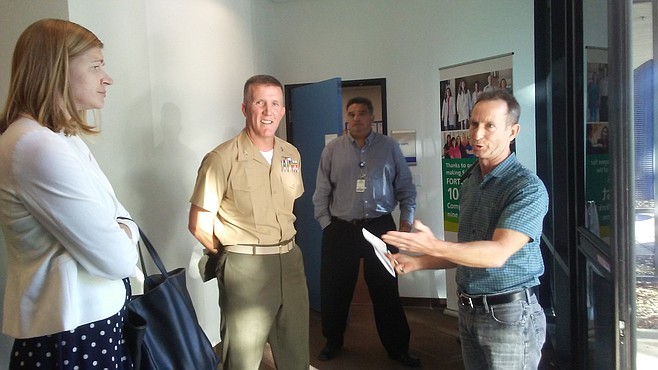 Col. Woodworth and Andy Gurney. Gurney: "They tell us to identify the offending flights and report them, and then they shut down the tools we use to do that."

"We gave (the Marines) thousands of these complaints, and nothing was done. Their response was to make it so we can't identify the flights," said Andy Gurney. "They tell us to identify the offending flights and report them, and then they shut down the tools we use to do that."

Initially, Gregor said the FAA does not make such decisions because it has no authority over the military. He did not answer the question of what prompted the FAA to take the action and directed this reporter to contact the company that does flight tracking for the airport, Casper Aero.

Sigmund Lenize, for Casper, said that the company — and many others — uses data provided by the FAA. "I know the FAA does not give us all the flight data," he said. "They provide us with the data we use but they don't tell us what they don't provide." Asked if the Marines requested that military flight data be removed, the base responded that "the FAA initiated the removal of data associated with military aircraft being tracked on public domains in order to be in compliance with federal policy. Force protection is something we all take very seriously." ‎

Some area residents are concerned about the arrival of the military's new F-35 aircraft, which can take off and land vertically. Construction designs for an F-35 hangar are underway, according to Maj. Kurt Stahl. Construction is expected to start in early 2018 and end in 2019. Two squadrons will fly them and they will each start with six of the aircraft, Stahl said. The F-35 costs between $95 million and $123 million each. Under current plans, there will be a total of 26 F-35s at Miramar by 2022, he said.

University City residents are more affected by the base than other neighborhoods. They are near the end of the runway and get some noise from take-offs. The area was the site of an FA-18 crash in 2008 that destroyed two houses and killed a mom, a grandmother, and two children. An investigation concluded that the crash was caused by poor maintenance and faulty decision-making by the pilot and ground personnel, according to the Marine Corps investigators. Four Marines were relieved of duty and eight were reprimanded; the pilot was grounded.

The crash and destruction left bitter memories for some people who live in the area. "What about the people who live under the take-off area?" said Barry Bernstein. "I really want to develop a forum to represent the 300 or 400 families that are in the immediate area to find out what the Marines are doing to make sure their school kids are safe, their homes and businesses are safe."

Woodworth pointed out that there have been no mishaps with the new jet. "Safety is our number one priority, after training," Woodworth said. "Training comes first. In order to defend the country, we have to train."

The environmental studies for the base additions was completed in 2010, and that noise studies show that the volume is roughly equivalent to the FA-18s that fly out of there now. The aircraft do have a unique sound, but the decibel levels are within two or three of the FA-18s, according to Department of Defense documents. Residents say that the jets flying out of Miramar frequently go outside the prescribed flight path. "Why are they flying over my house? Why are they flying over the high school?" another resident asked, saying it happens frequently.

Jet pilots are trained to turn north by the time they reach the 805 (at the west end of the base), Woodworth said. "If it's frequently, you've got to tell me the time and date," Woodworth replied. "I have all those data. If you look at the data, those airplanes are within (the acceptable) deviation." But residents say it has gotten harder to identify the flights because of the data being removed. Woodworth said that the complaints are evaluated and when he finds a pilot has gone off course, the pilot will get additional training and may even be disclipined.

So you bought a house near a military airfield and dont like the noise? I grew up in UC when the might Phantoms roared. Teachers at Curie Elementary would pause, and life would resume after they passed. Get over it, or move.

The point these complainants are making is that the Marines fly their aircraft lower than the Navy boys ever did. And that could be true. If true, do they NEED to fly them low, or is it just carelessness? Nothing suggests that the Marines could not change the practice, if they wanted to do it. It would be a simple thing to enforce.

While a better location for the Marine jets (and helicopters, too) might be Yuma, it isn't the Corps that would make that decision. And it wasn't the Navy that wanted to leave San Diego's Miramar. Politics plus base realignments were the cause of that. No naval aviator would choose to live in Fallon, Nevada in preference to San Diego County.

Bill Wisniewski labels himself a "writer" at the VA. His writing is substandard. He apparently has no understanding of punctuation, or when to capitalize words. Also, our senior senator is Dianne Feinstein (NOT "finestine"). And it's called the 3rd Marine Aircraft Wing (NOT "reprobate 3rd air wing"). Wisniewski should look up the word "reprobate" as it is not an accurate usage there. Furthermore, his use of "un-appropriate" is incorrect; the word he wanted is: inappropriate. Who is hiring these writers at the VA, and why?

Right on the mark. I'm a veteran, I use VA services, and that writing makes me cringe. His occupational description is his own, and may not reflect anything. In looking at Facebook comments posted here at the Reader and elsewhere, there is plenty of that sort of commentary which can only be charitably described as borderline illiterate.

I'm also a vet, and was a writer with the PIO (Public Information Office), 2nd Armored Div., Ft. Hood, TX. If we couldn't write, we would not have been assigned to PIO. I would hope the VA has similar hiring standards.

Since you and I are of the same age cohort, were you at the mentioned Army post when it was nicknamed "Fort Head?" Seems there was mucho drug abuse there during the late 60's and into the 70's.

As to your hope that VA has hiring standards, I cannot reassure you. There are some great people working in their facilities, and not just a few who are anything but great. Who knows?

I was at Ft. Hood during the late '60sl Most of the time we were able to score weed off base. This was where I first smoked a doobie. Trimmed mustaches were allowed during my last year (68) there, so I did grow one (even though I didn't really want one). The sergeants called them "cookie" dusters (but they used a different word than cookie).