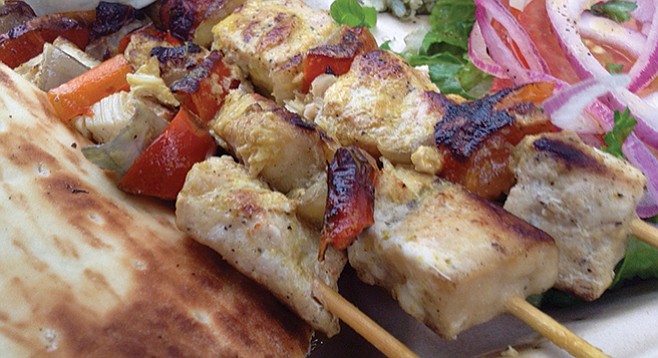 I gobbled Groovy Greek grub before the Quartyard closed

The guy with the wailing voice was, uh, me.

This was last week. I was staring down the line of lights of the bar near the doggy park at Park and Market. Nicole, serving at the outside bar, told me they were closing down Quartyard, this beautiful spontaneous plaza of life and living made of shipping containers and boxed trees and astro turf for the dogs, and beer garden and coffee joint and eateries and cornhole boards for their owners to toss bean bags at. All so developers with big pockets can build yet another ginormous profit center 20 stories high for rico-suave renters to live the East Village style that hardly any actual East Villagers can afford. Create community? Destroy community!

I know, I know. This was always the deal. And UCSD’s in the development mix. And the whole idea was to make temporary use of this empty block till the developers got their kit together to start building. And the NewSchool of Architecture grads’ experiment in spontaneous, temporary, urban living worked, but they knew it would have to go. Nicole says a replacement Quartyard’s in the works in East Village, but it won’t be ready for months.

The only good news is there’s a food truck I’ve never seen parked up here in the trees, and I need the consolation of munchy lunchy, like, now. 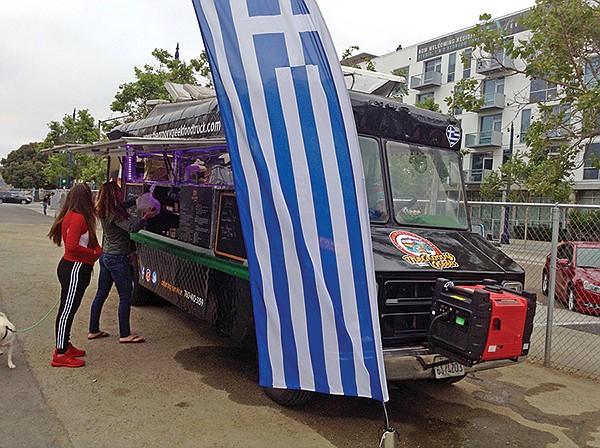 This black truck has a blue-and-white Greek flag fluttering in the late-afternoon breeze. Its sign says “The Groovy Greek.”

“Actually, this is our very first night. First day in business,” says the guy, Konstantinos Thalassinos, from Thessaloniki, Greece. 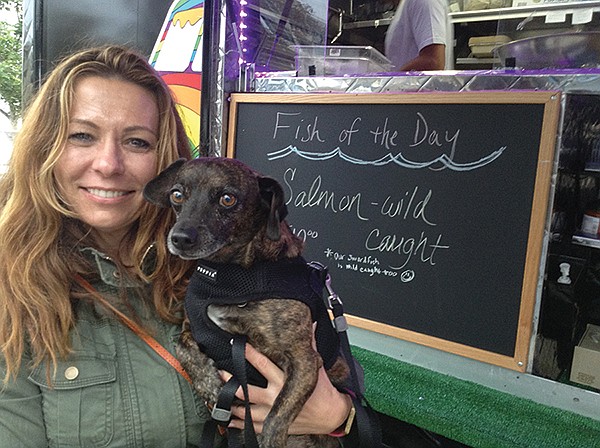 “And they’re really, really good,” says a gal standing next to me. Ivona. Like everyone else she’s got a dog with her. Paco. “Paco’s 67 years old,” she says. “Dog years. Nine, human time.”

She ate, then ordered a whole lot more stuff.

“Which one do you reckon?” I ask, seeing she looks like she knows what she’s doing. Turns out she’s from Poland, has traveled everywhere, to Vladivostok on the Trans-Siberian railway, to Azerbaijan, everywhere.

“Go for the specials,” she says. “Do you like swordfish? It’s really good.”

So when this gal in the truck, Najah, leans out and asks, “What would you like?” I go straight to the specials board. It says their Fish of the Day — salmon, caught wild — costs $10 wrapped in pita bread, $12 as a plate. Good to see they promise their food is “local produce,” “farm 2 table,” and “non GMO.”

The regular menu has three-buck basics like pita and “Trippy Tzatziki,” then a “Groovy Greek” salad, and “Peace Pitas,” and “Pimped Out Plates.” 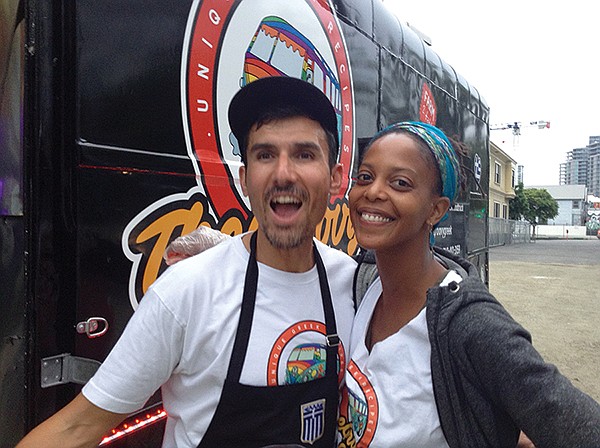 Huh? Oh, I get it. We’re on a ’60s hippie trip here. The logo is a ’60s V-Dub bus. How many of those must Kostas have seen tripping through Thessaloniki when he was a kid? So, yeah, the salad has good things like capers and Kalamata olives and costs $7. Plus, you can add a skewer of shrimp for $3 or swordfish souvlaki (souvlaki means skewered meat chunks, grilled, usually with veggies) for $3.50.

They have vegetarian pies like spanakopita (spinach with feta cheese) for $5.50, and an egg-and-cheese pie for $5, or bowls of “Cubano-style” black beans and rice “with the Groovy Greek Special Sauce” and pita for $7.50.

I end up going for the Pimped Out Plate of grilled swordfish — wild-caught, too, they promise — also strung on three skewers with roasted veggies, plus the Groovy Greek Salad, and spinach and rice (I could have had fries), and some Trippy Tzatziki. Costs $11. Comes with pita bread.

I mean, Greek food? Yes we’ve all had it. But it strikes me again how danged healthy this food is. Yogurt, salad, grilled fish. Even though I’ve never been the greatest fan of fish, but I know it’s good, and Kostas gives it a light garlicky flavor, and then the flesh and the onions and tomatoes and peppers on the skewer give it a kind of dense sweetness. Beautiful. What you’ve gotta have is a glass of vino, good and robust, or maybe beer, to wash it down. This meal is totally fresh and filling.

“There are plenty of ‘Greek’ places and trucks out there,” says Kostas, “but many are not real ones. They try to sell you things like falafel as Greek food. Nobody in Thessaloniki would know falafel. It’s from the Middle East.”

Kostas used to manage a restaurant in Thessaloniki. Then he came to San Diego, met Najah (she’s from New Jersey), and that was pretty much it. Now they’re married, and they’re making a life here. “Actually, it’s so like Thessaloniki,” he says. “The bay, the weather, everything except how expensive it is.”

This is Ivona. Paco’s binding her legs up with his leash. It’s because of a pup, Reef. He’s bouncing all round Paco. Looks like a border collie. Belongs to this guy Alden and his galpal, Jimme.

Oh, man. Something about this easygoing atmos: I look around. Dogs, people, bean bags, music, food, beer. Gonna miss this place! So, okay, Nicole says Quartyard’s only moving one block over, to 13th and Market. Smaller. I just hope it brings the same spirit with it.

We’ll find out in five months.

The Place: The Groovy Greek Food Truck; thegroovygreekfoodtruck.com; 760-410-3159; last seen at Quartyard (closed 6/2), 1102 Market Street, East Village; or from November (when it’s forecast to open), at 13th and Market Street