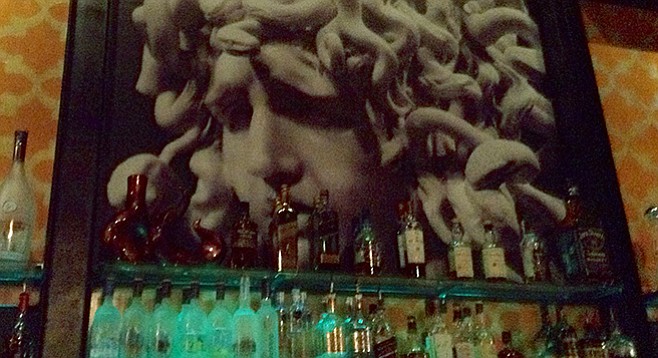 Get stuffed on Meze-Greek’s fusion foods 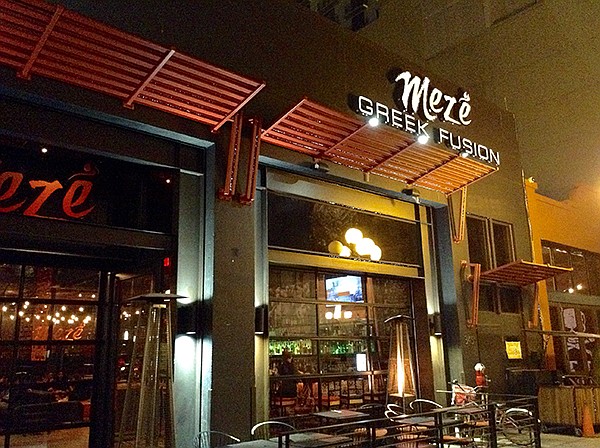 The view from 6th Avenue

I almost don’t go in. I’m thinking, Great, another sports bar with big hollow spaces and screens and racks of bottles you need ladders to reach. And 25 screens. And not even Gaslamp. We’re on Sixth, downtown, a block away from the action.

So I walk in past the flaming tower heaters at their sidewalk patio and into a warehouse space with a mezzanine floor like a theater gallery behind.

I pass under a massive hooped lantern chandelier, select one of the red-and-black bar stools.

Corey the barkeep hands me a Taco Tuesday menu. And they weren’t kidding about Greek tacos. Here’s the list: For two bucks you get a choice of the gyro, the falafel, the gyro Philly, or chicken. For three: The Greek sausage and the filet mignon taco. A salmon taco is $4.

Of course the menu goes beyond Taco Tuesday specials. This is a pretty swank joint, but not everything is outrageous. The avgolemono (egg lemon) soup is $7. The Greek salad itself (with romaine, onion, olives, feta) is $7, too. Hot mezes include the saganaki cheese dish, flamed at the table with brandy for $13, a Greek quesadilla with feta that goes for $6, a chicken souvlaki ($6), and a puff pastry with spinach inside for $10. 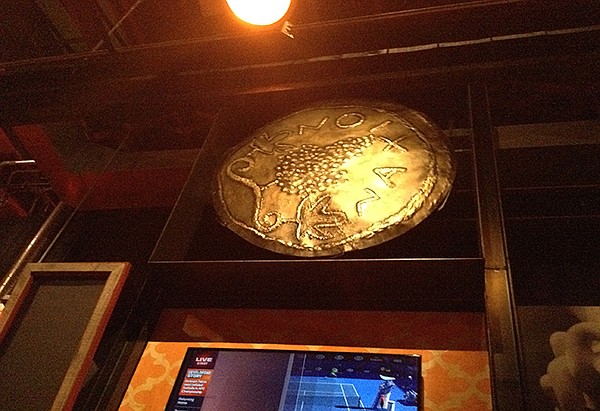 Meze? It’s the name of this place, too. Word is actually Turkish, comes from an ancient Persian word for tapas, meaning “a taste.”

But they don’t just sell tapas. They’ve got full plates, if you’ve got the bucks. Full size souvlaki plate goes from $19 (for chicken) to $30 for lamb.

So, yes, Greek take on everything. Even the lamb chops ($14 for meze-size, $34 for full plate) have that Greek lemon–olive oil mix.

Meanwhile, back in two-buckland, I go for the gyro Philly taco. You get lamb/beef gyro meat, mixed cheese, onions, peppers, Swiss cheese, “pico de Greco (“like pico de gallo,” Corey’s coworker Joshua says, “except with dill”). I could have had the filet mignon taco for $3, which comes with feta cheese and spicy tzatziki. Or a falafel gyro, with romaine, pico de Greco, and that yummy tahini.

In the end, can’t resist the Greek sausage taco ($3). Joshua says it’s like Italian sausage but without the fennel. No licorice fumes sneaking up your nose.

While I’m waiting, I order a brewski. ’Course that blows the budget right there and then. Seven bucks for an Alesmith Nut Brown.

On the other hand, Corey slides a glass filled with a bunch of seasoned pita chips. Crispy but gutsy, too, and perfect with my Nut Brown. And on the house.

I sip away while stuff happens around me. “Where’s the goddam drink?” says this tall guy coming up to the bar. “H2O! H2O!” Then a waiter comes out with a flaming plate. Honest, three-feet-high lickers. Turns out it’s the saganaki cheese plate. “Shrimp and Ouzo Saganaki,” menu says, “pan-seared kasseri cheese, flambéed in Metaxa brandy tableside.”

Sixteen bucks or not, I swear that’s what I’m buying next time. 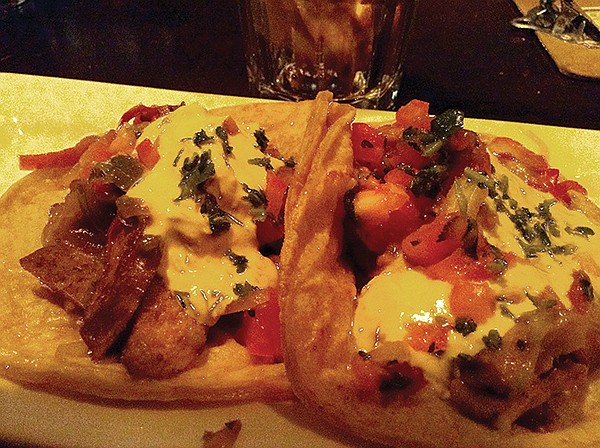 I notice two huge ancient metal coins, rotating above the back of the bar. One has grapes, and the word “Naxion” hammered around its edge. “A San Diego artist, Gary Harper, came and made these,” says Corey.

He has my plate. Two steaming tacos, propping each other up. Nice crispy corn tortillas, each loaded with onions, red and green peppers, golden roasted cheddar, tomato chunks, that zesty tzatziki sauce. Then gyro meat in the one,and Greek sausage in the other. Man, both are totally squishy, rich, and tender, I want to go on. And on. Guess the Greek sausage has the edge.

But, thinking about this Greek food, sitting here on Mexican tortillas, the tortillas could just as easily be pita bread. Suddenly hits me: This, right here, is the uniting of maybe the two most ancient pieces of cooked food on planet Earth. People around Greece, the Mediterranean were baking flatbreads as long as 12,000 years ago. That’s the Stone Age! And in Central America, the Mayans’ ancestors were doing the same thing with corn, turning it into tortillas, also back around 10,000 BC. Cavemen ate these very things on my plate here. Roman legionnaires ate them. Pharoahs ate them, Incas, Moctezuma, Napoleon, on and on.

And here on Sixth we’re bringing these two mega-ancient breads together and loading them with Greece’s today foods. Dunno...I just feel kind of awestruck.

I notice a list on the wall: “Ten Reasons Greeks Are Better at Life.”

Who knew? Fried cheese is the Greek national dish?

Reason #7 rings my bell, too: “We’ve perfected the art of lingering over a meal.”

Love to linger but gotta go. I look up at a photo of a goddess with snakes in her hair.

“Don’t look at her!” says Corey. “That’s Medusa. If she catches you looking at her, you turn to stone.”