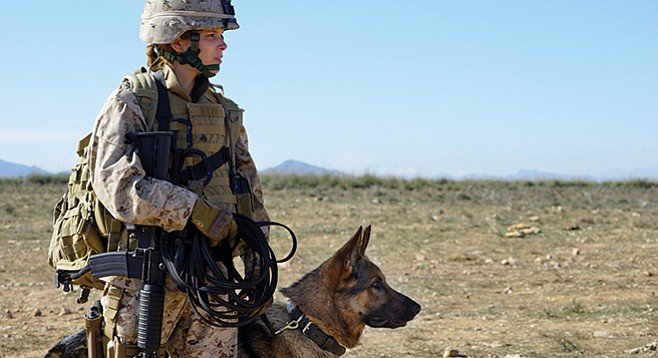 Her and Rex. Bring Kleenex.

According to the TV spot, Elle and People magazines are going slug-nutty over Megan Leavey, proclaiming the fact-based girl-and-her-dog war drama both “inspiring” and “heartfelt.” Do I heed the advice of these venerated strongholds of film criticism for folks trapped inside a doctor’s office waiting room and pack a hankie, or would a pre-show injection of insulin be more appropriate? 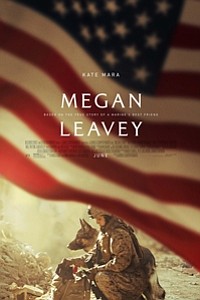 Well whaddya know? Megan Leavey is heartfelt and inspirational! When it was over, I couldn’t see the tops of my shoes for the dozens of dampened tissues that camouflaged them. Best of all, it’s also a polished, damn fine little combat picture in the guise of a docudrama based on the titular real-life Wonder Woman who, together with her bomb-sniffing military dog Rex, formed a “hurt kennel” of sorts and helped save over 100 lives during their deployment in Iraq.

My love of four-legged beasties being what it is, I had cause for some pre-show research. If it turned out that Rex had been blown to smithereens by one of the mines he was sent to sniff out, I’d have passed this one on to my critical partner. SPOILER ALERT: Rex died peacefully in 2012.

At the outset, Leavey (Kate Mara) is depicted as the type of person only a dog could love. By her own admission, she “checked out of life” sometime around 2001. An inability to get along with children, let alone their parents, brought about her dismissal from a job at daycare center. After her closest friend dies (the circumstances are later revealed in flashback) it’s no time at all before Leavey is en route to a South Carolina boot camp.

The film unfolds almost religiously from Leavey’s point of view. Instead of killing time trying to pump depth into a garden-variety mother and stepfather (Edie Falco and Will Patton), director Gabriela Cowperthwaite and her trio of screenwriters sketch out the bare minimum of information about the secondary characters, never once taking their eyes off the star. After all, how much more does one need to know about a mother who questions the amount of insurance money she stands to earn in the event her daughter waltzes onto an explosive device?

Once on base, a night of drunken abandon results in punishment time spent mucking out the kennels, and it’s here that our leads are formally introduced. Rex is an unlikeable, particularly vicious specimen, which probably accounts for a good part of the emotionally drained Leavey’s attraction to the beast. The manner in which Cowperthwaite gradually draws the two soldiers together is natural, never false or cloying.

In no time, every day is take-your-dog to-work day. Rex is terrific, but Mara steals the show. There’s barely a shot that goes by without her, and she handles the attention with aplomb, not only looking the part, but all but disappearing into the character.

Leavey returns home for Christmas, and before Tony Bennett can finish “Jingle Bells,” she’s back on base. Romance is hinted at long enough to offer a break from the tension, but as far as Leavey is concerned, her one and only love walks on all fours. Perhaps that’s why the film is most engaging when she and Rex share screen time.

If the name Gabriella Cowperthwaite rings a bell, it’s probably because her first feature, the scathing SeaWorld expose Blackfish, put a dent in local tourism. Can a vicious combat dog adjust to civilian life as a pet? (It’s sort of like asking if a killer whale can live their life as a captive circus clown.)

That’s the question Leavey spends the last third of the picture trying to answer, in her quest to save a fellow war hero. We’re all nuts about our pets, but you don’t want to be the guy who Leavey spies on a hot day leaving their dog locked in the car long enough to hit up a convenient store. The PTSD-fueled display that followed almost resulted in the marriage of a baseball bat and a windshield.

It’s clear the filmmakers weren’t aiming for an R rating. War films are generally rife with guys dropping f-bombs, but the only one uttered in this picture — and the reason for the PG-13 rating — comes from the mouth of Mara. And rightfully so.

It’s rare that I ask for less profanity, but without that word a more kid-friendly PG rating would have prevailed. It’s a terrific recruitment film, just not the gung ho, propaganda-spewing type most associated with the word. Megan Leavey doesn’t make war look cool — it makes the bond between human and animal look cool. When it’s over, instead of questioning your eligibility to join the military, why not consider adopting a dog? In this case, it’s the simplest, easiest way for life to imitate art.